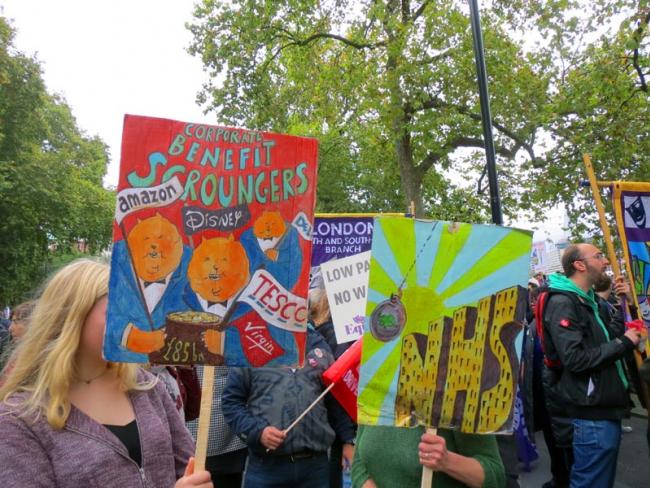 The TUC’s “Fair Pay Fortnight” runs from 16 February to 1 March, supposedly a time for Britain’s trade unions to campaign over Britain’s depressed wage rates. With the standard of living having fallen between 2010 and 2015 at its steepest since records began in Victorian times, and even David Cameron calling on employers to pay improved wages out of the vast pots of stashed cash they have accumulated, it seems a fairly muted campaign.

What’s fair about wages? If we are strong and well organised we get more. If we are not the employers take a greater share of the value we have created.

To launch the campaign the TUC highlight BECTU’s campaign against the Picturehouse Cinema group and low pay – a campaign asking people to tweet Picturehouse their anger and sign a petition. Perhaps lighting of candles and incantations would also help?

BECTU’s campaign notes that only one Picturehouse cinema recognises it for collective bargaining, the Ritzy in Brixton, south London. Staff there are earning £8.20 an hour, with further increases set to come – but staff at other cinemas in the chain have not been “offered” similar rates.

The lesson is clear. You get what you fight for, and nothing will come of nothing.

• Meanwhile, the former “nuclear free zone of Greenwich”, now re-branded as the “Royal Borough of Greenwich”, has introduced a new wheeze around low wages as part of an anti-poverty drive. The first 100 local employers to commit to the London living wage (£9.15 p per hour) will see their costs rebated from discounted business rates.

The concept of the “living wage”, like that of the minimum wage has always assumed that those on the lowest wages will continue to be subsidised by state benefits. This latest proposal subsidises the employer yet again – with the cost born by taxes paid by workers.