Skip to main content
Home » News/Views » 1941: The battle for Moscow 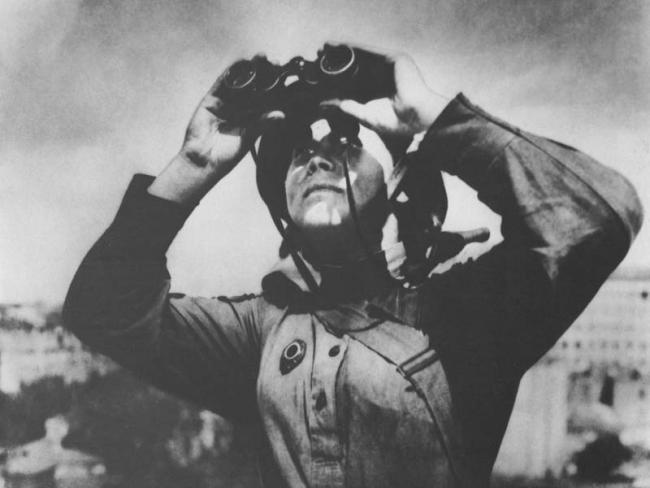 Scanning the skies above Moscow for German aircraft.

Seventy years ago the world held its breath as Nazi troops came up to the gates of the Soviet Union’s capital city...

Struggle and sacrifice on behalf of workers everywhere should never be neglected. This is particularly true of the battle for Moscow, the Soviet capital, in 1941, which receives slight attention compared to those for Stalingrad, Kursk or Berlin. The battle was immense, shifting over a territory the size of France.

It was not only the greatest battle in the Second World War but also the largest battle ever fought between two armies, involving more than seven million soldiers of the Soviet Union and Nazi Germany and lasting for 6 months from September 1941 to April 1942. The Battle of Moscow was decisive in the reversal of fortunes for Nazi Germany, benefiting workers around the world.

The Soviet Union paid a dreadful price – the loss of 926,000 soldiers killed – for inflicting on Hitler’s armies the first real defeat they had ever suffered. Previously the German armies had easily crushed Poland, Norway, Denmark, Netherlands, Belgium and France, and had an invincible aura. Hitler’s goal was for another swift victory in the east so that he could then return to the war against Britain, but fascist Germany’s blitzkrieg tactics, previously an unstoppable whirlwind, failed to triumph. After the Battle of Moscow, the myth of the invincibility of German soldiers perished, although three more years of bitter military conflict lay ahead.

‘Even in these first few days and weeks, there was solid evidence that some of the Soviet forces were capable of inflicting setbacks on the Wehrmacht.’

In 1941, Germany had the best equipped army in the world and Hitler envisaged another rapid campaign – to wipe out the Soviet Union, take control of the resources of Russia and the Ukraine and ensure Germany could never be starved and blockaded of materials as in World War One. Hitler considered Russia as Germany’s “Lebensraum” (living space). Initially, when they invaded on 22 June 1941, the Germans did catch the Soviets off guard. In the early weeks and months there was disarray and confusion. However, even in these first few days and weeks, there was solid evidence that some of the Soviet forces were capable of inflicting setbacks on the Wehrmacht (German army), even in circumstances of retreat. And on the second day of the war, the Soviet Union created the Council of Evacuation that would eventually lead to the dismantling and transporting of thousands of factories to the safety of the eastern regions of the country, out of the control of the Nazis.

German forces unleashed 3,550 tanks and 2,770 aircraft, backed up by another half million troops from Finland and Romania, and pushed deeper into the Russian heartlands, advancing 450 miles in the first month. Germany’s Army Group Centre was obviously heading for Moscow because of the city’s immense importance to socialism.

Before the coming of winter, German military operations aimed to capture Moscow, depriving the Soviet Union of its strategic and political centre, which housed the Soviet government, contained a massive industrial and armaments centre and was the country’s key transportation hub. Its seizure would have been a devastating blow. Nazi goals were to level Moscow to the ground and make it uninhabitable.

Despite large initial advances, the Wehrmacht was slowed by Soviet resistance, in particular during the Battle of Smolensk, which delayed the German advance until mid-September, disrupting the blitzkrieg.

At this stage, Moscow was vulnerable, but Hitler ordered the attack to turn south and eliminate Russian forces at Kiev – which resulted in a huge triumph for the Germans. Their advance on Moscow was resumed on 2 October 1941. Autumn 1941 was the lowest point reached throughout the war. But since 22 June, the Luftwaffe had lost 1,603 aircraft with a further 1,028 damaged planes. As a result, the balance of power in the air was shifting.

The initial advance resulted in two huge encirclements around the towns of Vyzama and Briansk which pocketed 660,000 Russian troops. But by mid-October, the Russian rainy period commenced, turning the roads and countryside into muddy quagmires. The German tank forces were reduced to a crawl, often unable to move. Through the great forests which lie in front of Moscow, only narrow trails were negotiable and it required only small Russian forces to block these. Their cavalry became very active during this period, frequently moving through the woods and getting behind German lines where they laid mines and ambushed supply columns.

By late October the German forces were worn out, with only a third of their motor vehicles still functioning, infantry divisions at a third or half strength, and serious logistics issues preventing the delivery of warm clothing and other winter equipment to the front. German supply lines were being stretched beyond their effective limit and the colossal loss of material on the eastern front – without having won a decisive victory – was bleeding the German economy.

On 13 October, Stalin’s decision to stay in Moscow even though some parts of government such as the General Staff and various civil government offices were evacuated to Kuibyshev proved a key turning point, though there was a temporary panic among Muscovites. The Soviets created a reserve of army units around Moscow. Moscow was placed under martial law. The civilian population were mobilised in the war effort.

Moscow itself was transformed into a fortress. 250,000 women and teenagers worked, building trenches and anti-tank moats around Moscow, moving almost three million cubic meters of earth with no mechanical help. Moscow's factories were hastily transformed into military complexes: the automobile factory was turned into a submachine gun armory, a clock factory was manufacturing mine detonators, the chocolate factory was producing food for the front, and automobile repair stations were repairing damaged tanks and vehicles.

Additionally, Moscow was now a target of massive air raids, although these caused only limited damage because of extensive anti-aircraft defences and effective civilian fire brigades.

Russian winters are as cold as the summers are hot. Snow starts in October or November and continues until April or May. Most of the German troops lacked winter clothing, resulting in over 100,000 cases of frostbite. Many Axis vehicles could not withstand the cool temperatures, resulting in cracked engine blocks. Their air force was grounded much of the time.

To stiffen the resolve of the Red Army and boost the civilian morale, Stalin ordered the traditional military parade celebrating the 1917 Revolution to be staged in Red Square on 7 November. Soviet troops paraded past the Kremlin and then marched directly to the front. The parade had a great symbolic significance in demonstrating Soviet resolve.

Of the two German armoured prongs, the 2nd Panzer Army operating to the south of Moscow got as far as the city of Tula where it finally ground to a halt. In the north, the 3rd and 4th Panzer Armies pushed across the frozen Moscow-Volga canal, but no further. By early December, some leading German units were able to see some of Moscow’s buildings with binoculars.

On 5 December 1941, fresh Soviet Siberian troops – comprising 18 divisions and prepared for winter warfare – attacked along with new and reconstituted units of the Red Army. By January 1942, they had driven the Wehrmacht back between 62 and 160 miles, ending the immediate threat to Moscow.

It was the closest that Axis forces ever got to capturing the Soviet capital. Though the Wehrmacht had been forced to retreat before, during the Yelnya Offensive (September 1941) and at the Battle of Rostov, Moscow marked a turning point: it was the first time since the Wehrmacht began its conquests in 1939 that it had been forced into a retreat from which it did not recover the initiative.