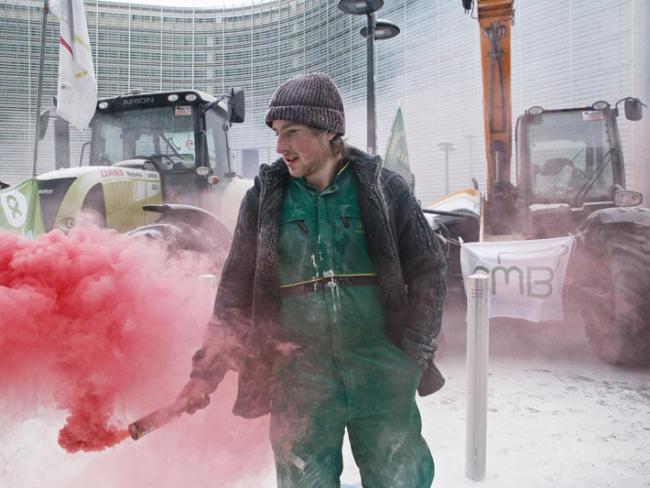 Brexit provides British agriculture with the chance of a lifetime. While the EU is desperately trying to find the money to prop up its ailing and corrupt Common Agricultural Policy, Britain can plan for a productive future…

Free from the chains of the EU’s Common Agricultural Policy, we can now consider how to feed ourselves, look after our countryside and our animals, and develop agriculture and its supporting industries for the future. An agriculture Bill has been introduced in the new Parliamentary session. It sets out how the government will support farmers with direct payments. Another Act has already put temporary arrangements for farm payments in place.

It includes measures to ensure transparency and fairness in food production, to encourage food production in sustainable ways, and, perhaps most significantly, to require ministers to publish plans first for five years from 2021 and then in seven-year cycles on how to provide financial support for agriculture, and to report on food security at least every five years.

Meanwhile, back in Brussels, as Workers goes to press, the EU is riven by division over its new seven-year budget. No longer able to use British taxpayers’ contribution to bail out backward economies, the Common Agricultural Policy is at the heart of this fierce debate.

Who will win out? Fortunately we do not need to concern ourselves with the answer, but a deal will not meet the needs of rural communities across Europe. We expect France’s small farmers to riot, but who’d have thought that the law-abiding Germans would block traffic in Berlin and other cities with bonfires and tractors, as we’ve now seen?

The Common Agricultural Policy has been a part of the EU and its predecessor organisations since 1962; the Treaty of Rome which established the EEC in 1957 included agriculture at the insistence of France. Continental European agriculture had developed very differently from that in Britain: here, early land enclosure and the agricultural and industrial revolutions created a working-class in town and country. There, even now, many countries still have substantial numbers of small peasant proprietors farming as they have for centuries.

The CAP gave us the absurdities of milk lakes, butter mountains and wine lakes. To remedy the wine lakes the EU proposed to grub up vineyards in some of the finest wine producing areas in France, Italy and Spain. It gave us set-aside, under which farmers were paid not to produce food. Today the EU spends around 40 per cent of its budget, £44 billion a year, on agriculture.

All this expenditure of money raised from workers has not been used to any great effect. Food scandals are a regular feature of past decades: last year three people died in Germany after eating listeria-contaminated meat. Although the authorities knew about the bacterial discovery, production was only halted after two weeks.

‘Wildlife habitat, even if the land is unfarmable, is frequently cleared…’

In 2013 meat products in Britain and Ireland were found to contain horsemeat, and subsequent investigations found that horsemeat from Romania was relabelled as beef, then transported to Cyprus, on to the Netherlands, and to Britain, Ireland and France. Dioxins have been found in food intended for humans on several occasions: in Italy in 1976 at Seveso, milk in Belgium in 1979, meat and milk in Germany in 1998, buffalo milk in Italy in 2008 and a quarter of a million chicken eggs in Germany in 2012.

Environmentalists pointed out how the CAP provides perverse incentives. Subsidy payments are made for land in “agricultural condition”, so wildlife habitat, even if the land is unfarmable, is frequently cleared to create empty unproductive ground.

Subsidies favour the giant agribusiness concerns against the small producer, since the more land you own, the bigger your payment. There is no residence qualification to receive subsidies: Russian oligarchs, Saudi Arabian princes and Texas oil barons are all among those who receive subsidies, taken from the British taxpayer and generously redistributed to these absentees. The price of land has been ramped up, far out of the reach of most farmers, so agricultural land ownership is now the preserve of finance capital.

Small wonder that Parliament was so unenthusiastic about Brexit: a Friends of the Earth survey found that 48 MPs and members of the House of Lords claimed £5.7 million in 2017 under the CAP. Across the EU, the top 10 per cent of CAP subsidy recipients account for nearly 50 per cent of the total subsidy bill, and the top 20 per cent get 80 per cent.

With the expansion of the EU to include Eastern European countries, a new twist to the folly has emerged. The CAP has become a tool of government patronage and corruption. A report by New York Times journalists showed how the CAP is used to introduce patronage, corruption and a new feudalism in nine Eastern European countries. For example, in the Czech Republic the prime minister, Andrej Babis, an agriculturist billionaire, received millions in subsidies.

Organised criminals in Italy discovered early on the money-making potential of agriculture (to the extent that commentators now refer to the “agrimafia”). They bought land cheap, using intimidation, and then waited for the subsidy cheques to roll in. In Slovakia the Calabrian ‘Ndrangheta gangs are in on the act, profiting from subsidies and suborning politicians. A Slovak journalist investigating these links was killed in 2018.

The EU prefers not to do anything about this. The central position of agriculture, and of subsidies, means no one has an interest in uncovering or preventing abuses. The EU rebuffed calls for investigations: both the Commission and the European Parliament rejected a move in 2015 to tighten subsidy regulation, and to prevent politicians profiting from subsidies they have a part in administering. In fact proposals for change in the CAP currently under discussion would decrease the already minimal and lax regime.

In many of the East European countries, after the counter-revolutions of the early 1990s considerable amounts of land still remained in public ownership. The privatisers, who were quick to see the value of energy, transport and other utilities, seem to have overlooked agriculture. So the EU worked hand in glove with national governments to put land up for auction, selling large tracts at knock-down prices, with the assurance of a steady income from EU subsidies.

Proposals to sell the land in small parcels, affordable and manageable by existing agricultural workers, were blocked. Often at the auctions, the oligarchs would be the sole bidders; local farmers were told not to submit bids, as the successful bid had already been decided.

We are free of this. But what now? Planning is necessary, but for whom and in whose interests? The Agriculture Bill is a start but we need much more. Subsidies must go to those who produce and work on the land, not absentee speculators and hobby farmers, and must be geared to the nation’s needs, not sectional self-interest. We could break the stranglehold of the supermarkets on food prices, and offer safe affordable food for consumers at prices that keep farms and farmers going.

We now have the opportunity to introduce our own welfare standards, to stop live animal exports, and revive local slaughterhouses, with strict inspection regimes.

We need secure, safe, sustainable food for all. We need rural communities that thrive, provided with the infrastructure and services they need to produce. We need to safeguard animal welfare, secure the future for our wildlife and wild places. We can reap the benefit of scientific and technical innovation in farming and food science in a second agricultural revolution. All this is now possible.