Another Brexit opportunity - the railways 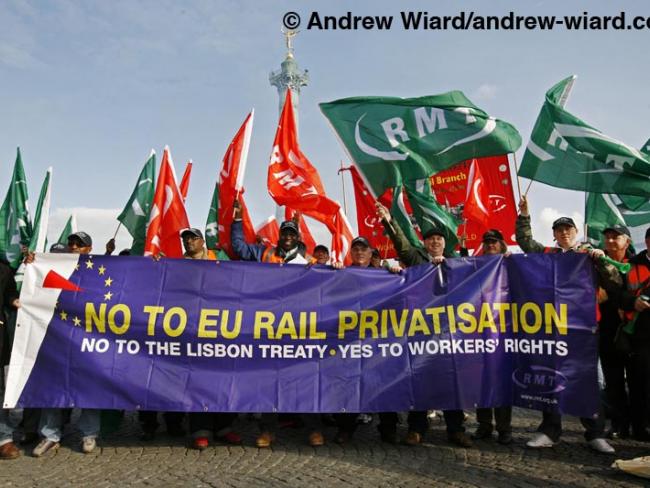 Rail unions campaigned for a Leave vote, knowing that only out of the EU can rail privatisation be reversed. Photo shows anti-EU demo, Paris, 2008. Photo Andrew Wiard/www.andrew-wiard.com

Brexit could have a profound impact on rail services in Britain. There is a bright future ahead but there is much to do to shape the agenda beforehand and much to do afterwards to assert the will of the British people and ensure a railway that serves their needs, and not the needs of private operators, foreign rail companies, and EU bureaucrats. What will the realities of Brexit mean, and what needs to be done?

The current privatised and fragmented British rail industry is a direct product of EU directives and laws. The EU and its predecessors have spent decades looking at ways to undermine publicly owned state railway operators, which provided rail services based upon the strategic needs of the people that owned them.

The EU has systematically sought to fragment the railways of much of Europe and pave the way for private sector profiteers that are out for a quick buck and never mind the consequences for safety.

The Thatcher and Major governments of the 1980s and 1990s were enthusiastic advocates of this EU “liberalisation”, as it was termed. British Rail was broken up into over 200 private companies in the 1990s, the only state operator in Europe (except Sweden) to disappear.

The then EEC dictated that wheel and rail were to be separated and Major was only too pleased to hand over the infrastructure to private company Railtrack, which saw its role more as a property company than the custodian of a strategically important transport network. Safety suffered greatly as eye and ball were also separated, and this resulted in high profile rail crashes such as those at Hatfield and Potters Bar.

The then Blair government had no real alternative but to force Railtrack into insolvency and create from its ashes an effectively publicly owned Network Rail to run the national rail network. Network Rail promptly ended contracts for maintenance and on both safety and cost grounds, it took the work in-house.

Labour has long cited the EU as the reason for it not being able to take the railways back into public ownership. The EU itself has implemented three “rail packages” that have opened up freight and international passenger services to competition. The result is that different state rail companies compete on the more lucrative international routes with an end to tickets valid on all services.

‘Freight across Europe has become a free-for-all.’

Freight across Europe has become a free for all. Predictably, the biggest fish in the pond, German state company Deutsche Bahn (DB) has gobbled up many other operators, some small but some that were part of other countries’ state railways.

The German company is also currently attempting to bully those staff remaining to take cuts in pay with much worse conditions, with the threat that if the staff and their unions do not accept their terms, DB will shut down the whole British operation.

Rail union RMT has responded by calling for British government intervention to save skilled jobs in the rail freight industry, blaming government inaction to protect steel, coal and the rest of Britain’s manufacturing base. The RMT has pointed to the government’s recently published strategy underlining its commitment to rail freight, including ensuring more capacity on the network, and the union has demanded that the government brings DB Cargo into public ownership as the only way that strategy will be achieved.

The collapse of steel traffic on the railways is a direct result of EU rules that prevent the British government giving state aid to a strategically important manufacturing industry. Steel volumes have dropped as a result of high energy prices, the extra cost of climate change policies, and dumping of cheap steel produced with state aid in China. The number of steel trains run by DB Cargo UK in the first nine months of 2016 was 5,820, down 33 per cent from 8,733 for the same period in 2015.

Should DB follow through with its threat and shut up shop, around two-thirds of Britain’s rail freight capacity would disappear. Not only would this make it very much harder to get freight off Britain’s overcrowded roads and on to the railways, but it would cause real headaches for Network Rail. DB Cargo operates many of the engineering trains that are essential to track maintenance and enhancements. Without those trains, Network Rail’s engineering programme would simply stop, and so would key parts of the railway.

DB also owns many of Britain’s passenger rail franchises along with one of the two “open access” passenger operators. French and Dutch national railways own many of the others. The French company SNCF is a major player in Southern, now infamous for its appalling services and disputes with all of the rail unions. It was notable that Southern recently attempted to use EU law to stop drivers’ union ASLEF from taking industrial action, a law SNCF would not dare try to use in France! The court, perhaps sensing the anti-EU mood of the country following the referendum, chose to uphold ASLEF’s right to take action.

‘Why are so many European state-owned companies operating in Britain?’

So why are so many European state-owned railways operating in Britain? The answer is simple – they can make profits here that they can then re-invest in their own countries. This has been brought about partly by the EU, and partly by successive British government’s commitment to the EU agenda of privatisation. The British rail companies simply do not have the clout of the much larger foreign state-owned companies, and have been able to make little impact in continental Europe.

The future of these commercial relationships after Brexit will be determined by the nature of the relationship which will emerge between Britain and the EU. The challenge facing Britain’s rail workers and their unions is to ensure that Brexit means an end to what is effectively a subsidy by British taxpayers to German, French and Dutch railways.

The EU’s “liberalisation” has also undermined safety. A serious collision between a freight train and a passenger train in Mannheim in 2014 was caused by a casual worker employed as a freight train driver but who only drove trains every now and then. He did not know the route and the location of signals, he over-ran a signal at danger, and it was only good fortune that large numbers of passengers were not killed.

In Britain more recently, a “casual” train driver in charge of a steam train came close to causing a catastrophic accident in which hundreds would almost certainly have been killed. There have been other serious incidents of this type.

A recent meeting of rail industry safety professionals concluded that Brexit would be positive, and that Britain would no longer have to continually fight against some of the more bizarre edicts emanating from the EU Agency for Railways.

Rail unions RMT and ASLEF campaigned for a Leave vote in last summer’s referendum, both being clear that the only way that the policy of all the rail unions to return the railways to public ownership would be realised would be outside the clutches of the EU and its privatisation and liberalisation agenda.

The RMT union stresses that the EU is intent on attacking trade union rights and collective bargaining, and on driving down wages. It has also pointed to EU-inspired social dumping – importing cheaper labour – that has decimated British seafarers, and the compulsory tendering of publicly owned ferry services run by Caledonian MacBrayne. Scotland’s so-called government has this tendering to attempt to undermine the lifeline ferries and their workers serving the Scottish islands.

Instead of standing up for British people and British workers, the SNP was enthusiastically paving the way for the likes of Serco to move in.

The RMT also warns about the consequences if Britain were to remain in the EU. The EU’s “Fourth Rail Package” seeks to build on previous packages to extend fragmentation and privatisation to domestic rail services, including the compulsory competitive tendering of rail passenger services and separation of infrastructure and operations. The RMT argues that the EU’s proposals to create a Single European Rail Market will entrench privatisation in Britain, and bring about a race to the bottom of rail workers’ pay and conditions.

Other trade unions have so far been considerably less vocal about what Brexit should look like. This needs to change.

The British government and the EU share an ideological commitment to privatisation, and the extent to which that can be rolled back very much depends on what demands are made of our government during the Brexit process.

Rail unions should be demanding an end to foreign EU state-owned companies running our railways and thereby milking British taxpayers. The unions should also take advantage of Brexit and demand that Britain’s new trains are built here . Until now, the EU has insisted that such procurement be tendered for across the EU. This has meant that most trains are built by foreign companies such as Siemens, Bombardier and CAF – all from Europe – plus Japan’s Hitachi. Much of Britain’s train manufacturing base has been closed down as a result.

‘The one-size-fits-all approach by the EU will no longer apply.’

There has been some EU funding for rail projects in Britain. Since Britain is a net contributor to the EU, the challenge is to ensure that the government continues the funding.

Britain has always signed up to agreements on interoperability and technical standards even before we joined the EEC, and this will carry on after Brexit. But a Britain outside of the EU doesn’t have to accept Brussels rules on privatisation and liberalisation for international rail traffic to continue.

Network Rail, for example, has implemented the GSM-R driver-to-signaller radio system across the network and is gradually rolling out the EU’s traffic management (ERTMS) and train control (ETCS) systems. Standardisation of technical standards is a worldwide phenomenon, and countries outside the EU such as Australia and India have chosen to adopt European systems.

The one-size-fits-all approach by the EU for all European rail networks will no longer apply, and the current regulatory framework could be modified to be better suited to the rail network in Britain.

Despite the lies peddled by the Remain camp, it is unlikely that international travellers will require visas or face any more stringent passport checks than they do now. Inter-rail tickets will still be available allowing travel in multiple countries – and many of those countries themselves are not in the EU!

It’s clear that Brexit will benefit Britain’s railways. Unions and rail users alike need to be actively shaping the agenda before and afterwards so that the needs of the British people and not those of private operators, foreign rail companies, and EU bureaucrats are paramount.