Skip to main content
Home » News/Views » Are we witnessing the strange death of the European Union?

Are we witnessing the strange death of the European Union? 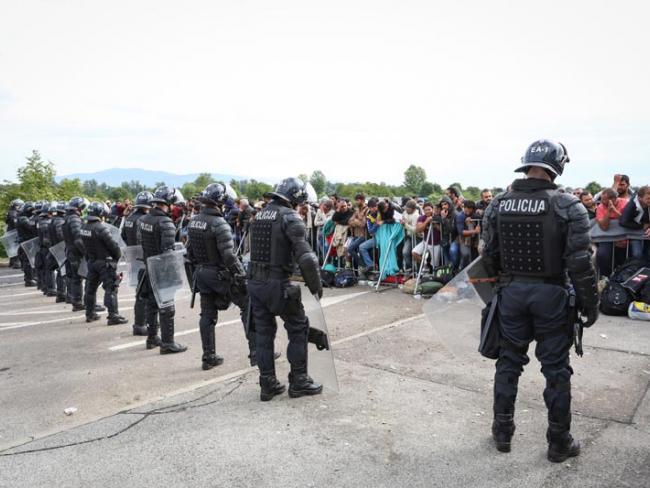 Migrants at the Slovenian border, 2015. Photoman/shutterstock.com

You may think that the British referendum on in or out of the EU is the only referendum in town, but you’d be wrong. Denmark had a referendum in December 2015, on the issue of cross EU border policing. This is the same cross border policing that, we are being threatened, would put Britain at greater risk of terrorism if we voted to leave the EU. (Nonsense, of course.)

For Denmark it could mean Europol membership, European Arrest Warrants and bringing the national Criminal Justice system in line with EU criminal law. The Danes, who voted against the Maastricht Treaty in 1992 in a similar referendum, saw this as a straightforward issue of national sovereignty and voted No, despite both the government and the opposition urging a yes vote.

So Denmark retains its own criminal justice system. Bear in mind that this referendum took place just weeks after the Paris terrorist attacks, and it takes on more significance. Yet we are told doing the same would be a disaster for us.

And the Netherlands will be holding a referendum on 6 April. The Dutch will be voting on ratification of the EU–Ukraine Association Agreement. In the Netherlands, a referendum must be called if at least 300,000 people sign a petition on the government’s website calling for one: 450,000 signed and the referendum will go ahead on the due date.

Opinion polls show strong support to vote down the ratification Act agreed by the Dutch Parliament, although at least 30 per cent of the electorate must vote.

A rejection of the agreement “could open the doors to a continental crisis in the EU”, bemoaned unelected EU Commission President Jean-Claude Juncker, adding only Russia “stood to benefit from a No vote” – although nobody really knows what would happen if the Dutch vote No. It would probably be a safe bet that the outcome of the referendum would be ignored.

And news of another referendum! This time it’s in Hungary. The issue this time is the EU decision to allocate quotas of migrants to every EU country.

After last year’s migrant fiasco – caused when German President Merkel called for a million migrants to come to Germany –  the EU, at Merkel’s insistence, outvoted Hungary and other East European countries, forcing them to take thousands of migrants.

At first, the outvoted countries resorted to building fences and taking other measures, including use of the military, to secure their borders. First Hungary, then Slovenia, Austria, then other Balkan countries followed by Denmark, Sweden and now even Belgium has reinstated its border with France.

Schengen is effectively dead, and the migrant season has barely begun. Hungary has stepped up its production of razor wire, fencing and posts and has even donated to Macedonia, sufficient to put up a border fence with Greece.

The question on the Hungarian ballot is interesting. “Are you in favour of the EU being allowed to make the settlement of non-Hungarians obligatory in Hungary, even if the parliament does not agree?” The ballot also asks whether voters are for mandatory quotas or for the independence of Hungary.

If that wasn’t enough, Germany is threatening Poland with sanctions for introducing new laws increasing surveillance of the public to something near British levels and for appointing new Supreme Court judges. Germany has also threatened financial sanctions against any country not abiding by EU decisions on issues such as migration.

To cap it all, Austria convened a summit of Balkan countries, without inviting Greece, to agree how to stop the migration flow, while Brussels have given Greece three months to close and control all of its 8,500 miles of border or be suspended from the disappearing Schengen area. Brussels knows this to be an impossible task, especially after what the EU has done to destroy Greece – it would essentially turn Greece into one big migrant camp.

Little wonder, then, that Greece has now withdrawn its ambassador from fellow EU member Austria, and that the Czech Prime Minister has said that if Britain votes for Brexit, the Czech Republic may well follow. On Thursday 25 February , the EU Commissioner for Migration, Home Affairs and Citizenship, announced that if the migration crisis is not solved within ten days, it would be the end of Schengen, or passport free zone.

Another divisive issue for EU members is the question of sanctions against Russia. The sanctions were introduced at the insistence of the US, but are deeply resented by many EU countries including Hungary, Slovakia, the Czech Republic, Greece, Italy, Spain and Portugal. Britain is the biggest advocate of sanctions against Russia. Meanwhile, Germany ploughs ahead with its Nord Stream Pipeline from Russia directly to Germany, at the expense of other EU countries.

Are we witnessing the slow-motion disintegration of the EU? Who knows? The EU is vital for the survival of capitalism, which will not want to turn its back on the EU and free movement of workers to reduce wages levels and boost profits. But at what price?

This story still has a long way to go. It’s difficult to believe that the EU’s objective is ‘“ever closer union” while its members squabble, threaten one another, turn on one another and try to look after their own interests.

Having witnessed how the EU treated Greece during its debt crisis last year, and now watching them tear one another to pieces, British workers should look to take steps to protect their class and their own interests. There is only one way at the moment. That is to vote to leave this shambles that Cameron, Corbyn and the TUC, to their shame, want us to endure for ever.