AUKUS: the path to war 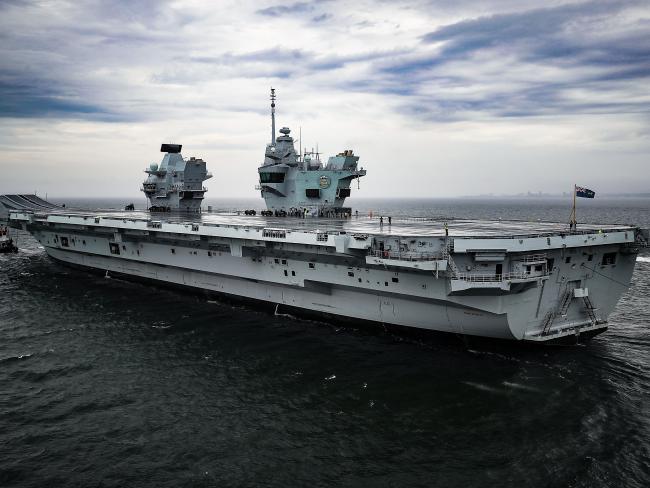 The Royal Navy’s latest aircraft carrier, HMS Prince of Wales, setting out on sea trials in September 2019 from Rosyth Dockyard. The ship took on its US-made F-35B Lightning fighter jets in July 2021 and is now on active service. Picture Alex Ceolin (OGL v1.0)

The USA, Britain and Australia announced a new security pact on 15 September. Known as AUKUS, it is intended to set the direction and focus of Britain’s foreign and security policy for the long term. It is a key element of the government’s “Global Britain” project.

Prime Minister Boris Johnson told MPs that the agreement is “not intended to be adversarial towards any other power”. However, Brexit Watch, one of the government’s cheerleaders, openly stated that the agreement “firmly places the UK at the forefront of the Western pushback against the growth of China.”

The Labour Party welcomed the announcement. Their MPs seem to have learnt nothing from the two decades of failed land war in Asia.

The pact “is aimed at countering China’s growth in the Indo-Pacific region, with the first step towards this goal being the development of 6 nuclear-powered submarines for the use of the Australian Navy.” Defence Secretary Ben Wallace said on 16 September, “if Australia wants to join in great coalitions then it will want to bring new capabilities.”

Australia would become the seventh country to have nuclear powered submarines. The others are Britain, USA, Russia, China, France and India. Unsurprisingly, China views this extension of military technology as a threat to peace and stability.

This agreement speeds up a dangerous and self-perpetuating cycle: the more the USA increases its commitments to its allies in opposing potential Chinese ambitions, the more these allies are inclined to act aggressively towards China, and the greater the likelihood of a direct US-Chinese confrontation.

‘This agreement speeds up a dangerous and self-perpetuating cycle.’

One of the most striking trends in East Asia since President Obama’s “pivot to Asia” has been that East Asian states have acted more assertively in dealing with China. The Japanese, Filipino, Vietnamese, and other military forces have all taken a more aggressive stance on their maritime disputes with China.

Australia – which has no maritime disputes with China – has also, quite gratuitously, taken to militarily challenging China’s maritime claims. The day after the pact was announced, the Australian defence minister Peter Dutton justified it as preparation for possible conflict over Taiwan.

The pact is part of a range of anti-China policies. The Johnson government also aims to join the Comprehensive and Progressive Agreement for Trans-Pacific Partnership (CPTPP), and to strengthen its new relationship with the Association of Southeast Asian Nations (ASEAN), “both of which have a specific focus on countering the influence of China.” Likewise, the “Quad” of the USA, Japan, India and Australia is focused on “containing” China.

This provocative new agreement adds to the danger of war. Britain should take no position on the clashing maritime claims in the South China Sea and the East China Sea. They go back to the end of the Chinese people’s liberation from Japanese occupation in 1945 and the subsequent civil war and revolution, in which the US interfered. It was none of our business then, and it certainly isn’t now. We have no business trying to “counter” China.

Discussion meeting (via Zoom): Global Britain - a green light for aggression?
No end to foreign attacks on Yemen
Iraq: US ends combat ops
No more imperialist wars!
US combat operations in Iraq ended