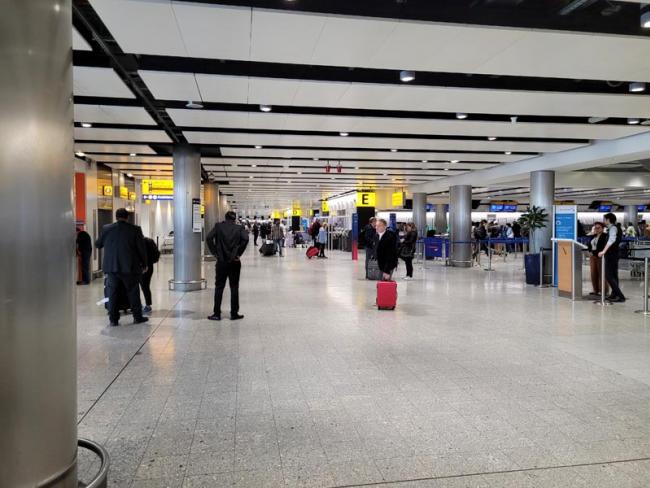 Heathrow departures: don't expect it this quiet over the summer. Photo Workers.

Airline travellers have suffered several months of cancellations and long delays at airports. On one day in late May, 377 flights were cancelled affecting 56,000 people. And Heathrow imposed a cut in passengers flying out at certain times of day until the beginning of July.

This prompted a round of blame and finger pointing. Government blames the airlines; they blame the government – and Brexit. Both government and the employers want workers to pay for it through government spending and worse employment conditions.

Grant Shapps, the transport secretary, pointed to the taxpayers’ financial support during the pandemic, to the tune of £8 billion. The airlines, and others, say that the government’s furlough payments were withdrawn too soon and should have been extended even though other businesses did not have that support.

In reality, airlines – notably BA and easyJet – and the airport operators, took a punt that they could get away with redundancies and that it would be easy to get people back when travel resumed. It’s not turned out that way.

Oliver Richardson, Unite aviation officer, said that both the government and the airline industry had “failed passengers and failed people who work within the industry”. The government didn’t support the industry during the pandemic to the extent other countries like the USA and Spain had done. And after tens of thousands of jobs were removed it proved hard to recruit them back.

The industry is still wedded to short-term, unsustainable, reactions. Like BA, easyJet (and probably other airlines too) is using fewer cabin crew on flights, but removing seats to achieve a passenger/staff ratio that meets regulations. And many employers in the sector are calling staff to work more with extra overtime to sort out the crisis.