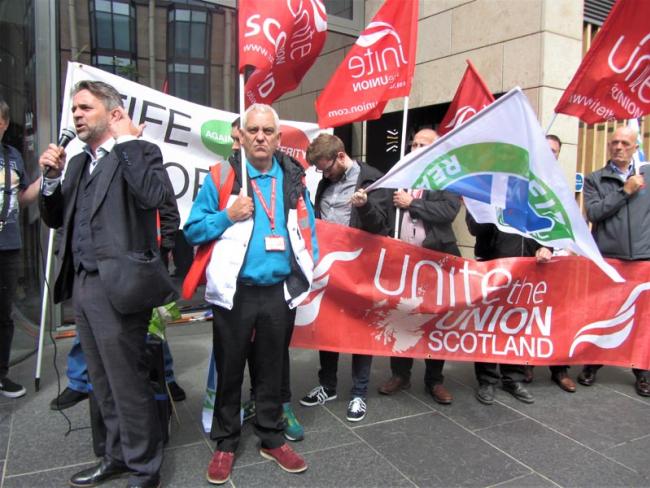 With six months to go until the elections for the Holyrood parliament in Edinburgh, the future of Britain could be in the balance, even as the country prepares for its final departure from the EU.

Obtaining the majority of votes in that election, say the governing Scottish National Party, would be their starting whistle for a second attempt at winning a referendum on breaking Scotland away from Britain.

More extreme or “left” elements in the separatist movement, outside the SNP, call for such an electoral outcome to be a mandate for an actual declaration of “independence”. An indication that their campaign is well under way comes with Mike Russell – the SNP Constitution Secretary – saying “there will need to be a referendum....I’m quite sure before the end of next year.”

So centuries of building working class unity and achieving British independence following the successful Brexit campaign are to be jeopardised by this ideology of fragmentation. And this is happening in the middle of a medical crisis in which point scoring has become more important than public health – if Johnson has three tiers, then Sturgeon has to have five.

Act quickly or this contagion will spread to England too, where the arguing over lock-downs between different areas could all too easily morph into calls for regional assemblies and parliaments as dissatisfaction spreads.

However, those who push fragmentation can also fall victim to it. Some see the growing internecine warfare within the SNP as the beginning of the end for separatism, despite it riding high in recent polling.

Examples are the stifling of SNP MP Joanna Cherry’s attempt to stand for and enter the Scottish Parliament, the legal contortions of the Sturgeon–Salmond quarrel, and the SNP MP who flagrantly broke her own quarantine regulations and stubbornly refused to accept her own party’s call to resign.

In addition there are new kids on the block that may fragment the separatists’ own votes in May. Readers may be surprised to hear of the existence of anti-EU, pro Brexit voices within the SNP, but it has been estimated that about a third of SNP supporters voted to leave the EU in 2016. Well, now leading lights of that tendency have abandoned the party.

Chic Brodie (ex MSP) and Andy Doig (local councillor in Renfrewshire) have formed Scotia Future – standing for “real independence” outside both Britain and the EU. Another former SNP MSP, Dave Thompson, has formed a new party, Action for Independence, and there is the Independence for Scotland Party. Reacting to the formation of these new, more extreme parties, Pamela Nash of Scotland in Union said “whatever the brand, it’s still all about dividing people.”

Divisions in the ranks are what probably led SNP MP Kenny MacAskill, in an article for The Scotsman newspaper, to demand of his colleagues in October that the “SNP must make alliances”. He was hoping for “some Labour voices breaking ranks” but his main focus was on winning the support of the Scottish Trades Union Congress, pointing out that “It should never be forgotten that it was the STUC who kept devolution alive in the 1960s, when Labour abandoned it.”

Indeed it was the STUC’s Campaign for a Scottish Assembly that sent much of the trade union militancy and energy of the 1970s up the garden path. It was a fifth column for the EU in the Brexit campaign and is now heading for out-and-out advocacy of separatism (see article, page 5). And that’s before it has properly consulted its component trade union affiliates.

There is pride about the anti-separatist role played by six trade unions in the two-year campaign for working class, Britain-wide unity leading up to the 2014 referendum in Scotland. But we must hold those unions to account and encourage them not to waver this time, but instead to add more unions to their ranks.

The pressure is on to recruit them to the side of fragmentation and separatism, as MacAskill makes clear when he says, “Now it may not be possible to get all the union barons to convert, but getting them into neutral or accepting the will of their Scottish members is possible. Work on that must commence.”

‘It’s time for pro-unity voices throughout Britain to step up to the task. Far too many simply accept that a break-up is coming...’

MacAskill knows the backbone role that those trade unions played in encouraging their members to vote for class unity in 2014. The six – GMB, USDAW, NUM, CWU, ASLEF and Community – have the opportunity in the coming six months to ensure their position is for unity, at their branches and conferences. MacAskill’s derogatory reference to “barons” indicates his disdain for workers who are union members and who can very well think for themselves.

MacAskill went on to appeal that “…the forthcoming party conference must make independence and a mandate for action thereafter, centrepiece of the 2021 election campaign.”

Legally and constitutionally, this is not possible. According to the Glasgow based think-tank A Force for Good, a majority of seats for separatist parties at a Holyrood election simply will not be enough to demand a second vote to break up Britain, held together at the level of the British parliament. And that’s where a mandate for unity is found.

In addition, in terms of voter turnout in Scotland, the think tank’s analysis found the UK parliament has considerably more democratic legitimacy than Holyrood, with an average, over several elections, of 66 per cent against Holyrood’s 53.24 per cent. Devolution itself means that Holyrood is a subservient devolved assembly – despite its self-proclaimed title of “government”.

Nevertheless, campaigning against separatism and for British unity needs to be revived and stepped up across the whole of Britain. Enough warnings have been given, such as the leaked strategy document from a Conservative Party consultancy firm finding that there was a “vacuum of leadership” which was “leaving the campaign to save the Union  rudderless at a key moment.”

The old Better Together campaign of 2014 is obviously no more – and probably for the better, as we remember the way that Labour, in the form of characters such as Gordon Brown and Eddie Izzard, started twisting the campaign towards the end into a “better together in Europe” outfit looking ahead to a projected EU referendum.

But stalwart campaigning for unity is under way – with more cooperation and none of the rancour found on the separatist side. As well as AFFG and Scotland in Union, candidates opposing separatism are being put up by new parties such as Abolish the Scottish Parliament Party and the Alliance for Unity.

A united front would be a sure way of blunting the SNP axe, but pro-unity voices in the mainstream parties seem obsessed with their own narrow party gains. With his confused messaging, Labour leader Keir Starmer gave rise to headlines about Starmer boosting Sturgeon’s bid for independence

Now it seems he is seeing a vote for a second referendum at Holyrood as good enough reason for him to immediately concede one. And the Labour Party in Scotland is a prime mover of the notion of “progressive federalism” – another ingredient in the recipe for fragmentation and separatism.

It’s time for pro-unity voices throughout Britain to step up to the task. There are far too many who simply accept that a break-up is coming, too many who are vacillating or despairing. An example would be the heading for Jeremy Warner’s article in the Daily Telegraph on 18 October: “Our union with Scotland is dying, and we seem powerless to stop it”.

In fact, we see that increasingly workers are not being paralysed by inaction. We see this in the campaign against the job losses at Rolls-Royce – with Pat Rafferty of Unite saying that in instances like this “the Scottish Government’s record has been absolutely abject”.

Ongoing action by RMT against SERCO on the sleeper trains issue links with its criticism of the Scottish Government relationship with the company. And the news that the deal for Burntisland Fabrications (BiFab) to build structures for a £2 billion offshore wind farm has collapsed has galvanised the GMB into action.

GMB Scotland secretary Gary Smith said “It’s a scandalous end to a decade which started with promises of a ‘Saudi Arabia of renewables’ supporting 28,000 full-time jobs in offshore wind and now finishes in mothballed fabrication yards and no prospect of any contracts or jobs on the horizon.”

The Scottish government response was to fall back on doing “everything possible to support the business while recognising the need for us to remain in line with state-aid regulations”.

And all unions are gearing up to fight looming unemployment, especially among younger age groups. The backbone for all of this comes from Britain-wide solidarity, as must the fight to keep the country together in the face of the attempts to tear it apart.