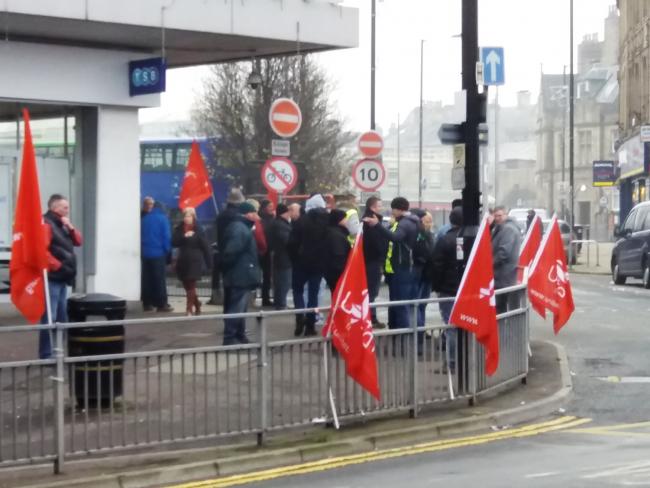 Pickets talk to members of the public at Keighley bus station on 4 December. Photo Workers.

Drivers in Durham and Keighley are fighting for pay increases with strikes in December. Both groups strongly support this action to counter pay falling behind inflation.

Keighley’s 180 drivers rejected an offer of 34p an hour over two years. They struck on Tuesday 4 December in favour of 50p payable now. Keighley Bus Company, a subsidiary of TransDev, said they could not afford to increase pay by more than the rate of inflation.

The employer claims the drivers are already among the best paid in West Yorkshire and points to its investment in new buses. Phil Bown, Unite regional officer, responded that his members’ income had not kept up with inflation over many years.

"Drivers could not sustain erosion in living stadnards."

Mr Bown said the company’s offer was still below inflation. The action was a last resort as drivers could not sustain continued erosion in their standard of living. A meeting is taking place with ACAS the week after the action.

Arriva Durham drivers will be on strike for a week from Sunday 16 December. The 650 Unite members claim that they are the second lowest-paid Arriva drivers nationally. The vote was 95 per cent in favour of a pay rise of £1 an hour, backdated to March.

Negotiations mediated by ACAS broke down on 5 December. The drivers are based at Redcar, Darlington and Stockton as well as Durham, affecting services over a wide area of North Yorkshire and Teesside.