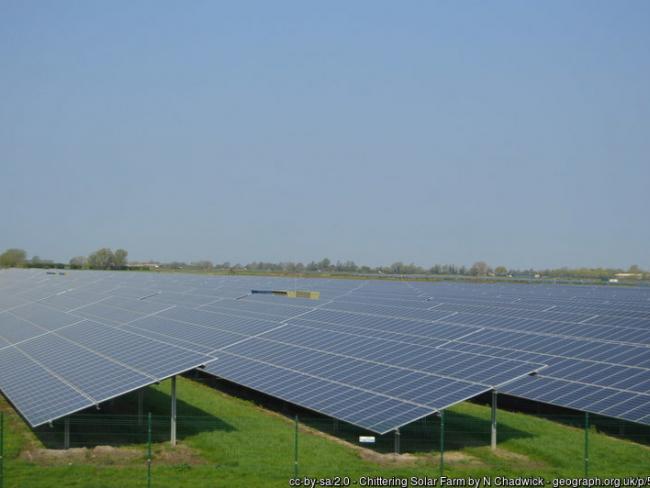 A plan to build a huge solar farm on prime agricultural land on the border of Lincolnshire and Rutland is being challenged by an impressive local campaign group determined to fight it all the way.

Two companies – Canadian Solar and Windel Energy – want to construct the Mallard Pass Solar Farm, a massive project that would cover more than 2,000 acres (3 square miles) either side of the East Coast Main Line near Essendine – eight times the size of the largest existing solar farm in Britain. The distance from one boundary to another would be almost five miles.

Although the project looks like a Canadian/UK joint venture it now appears that the finance is coming from China – the project involves the large-scale importing of Chinese solar panels.

The companies launched a local public consultation on 4 November last year, with a closing date of December 16. They might not have anticipated the rapid response and organisation of local people opposed to the plan.

The Mallard Pass Action Group is organising rapidly on a number of fronts. Since the beginning of this year alone the group has generated articles in the local press, media interviews, and an aerial video showing the extent of the proposed land grab.

One local MP, Alicia Kearns, has now made a strong statement opposing the project. A national petition has been launched, which notes the need for agricultural land to maintain food security. Banners and signage have been produced ready for the next phase in the fight. Every village has a lead representative and team to support them with door-to-door activity.

Sub-groups have been set up to address the varied complex issues involved in the fight. These include Strategy, Environment, Heritage, Traffic and Transport, Communications, and Community Engagement.

The companies’ slick marketing campaign is full of environmental-friendly imagery. But behind the soft-sell language is a harsh message: we had better get used to massive solar farms – they are the future. Their planning lead Sarah Price told the BBC, “For the government to meet its targets for net zero and decarbonisation of the energy sector by 2035 we do need solar projects of this scale.”

So this is not just one proposal – at least five solar farms are proposed for Lincolnshire already this year, according to Keith Busfield from the action group. The group does not object to solar energy, he says, but is alarmed at the potential blotting out of agricultural land. And its members do not want to see Lincolnshire turned into a “sea of panels”.

The eight villages likely to be most affected by the solar farm would be surrounded by solar plant. The huge open skies of rural Lincolnshire would be replaced by acres of solar panels and security fencing.

Local people have pointed out that there should be a requirement to use brownfield sites unsuitable for farming. And why not make developers of new housing, and company warehouses, put solar panels on their roofs?