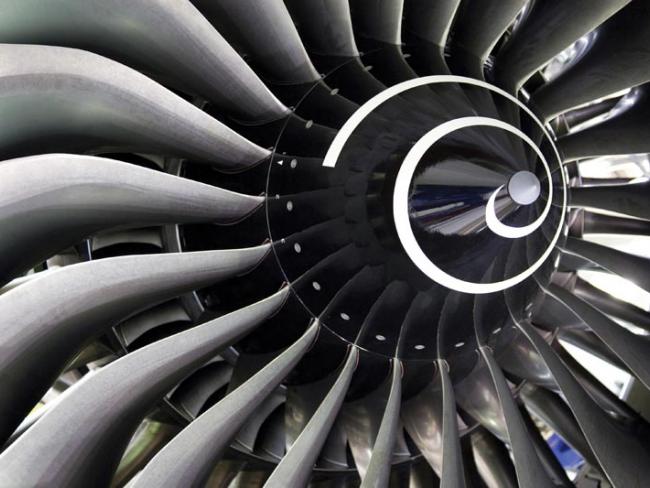 The Trent aero engine, made in Derby. Britain has the largest aerospace industry in Europe, employing over 100,000 workers – second only to the United States globally. Photograph reproduced with the permission of Rolls-Royce plc, copyright © Rolls-Royce plc 2013.

With its share price plummeting and the City breathing down its board’s neck, Rolls-Royce appears more concerned to produce a hefty dividend than to maintain the skill base on which its profits depend…

In November Rolls-Royce announced proposals to reduce its Aerospace Division workforce by 2,600 jobs worldwide over the next 18 months. The company claimed its aim was to improve operational efficiency and reduce costs – in contradiction to a statement made at the same time that the company’s order book stands at £70 billion!

In January a decision had been taken to “right size” the defence business. It now seems that the civil side of the business is to be shaken up as well.

With the share price plummeting and the city breathing down the neck of the Board, it is considered more important to ensure that shareholders are paid a hefty dividend than to maintain continuity of the workforce through a short period.

Several major engine programmes have moved from the development phase to the launch and manufacturing phase, significantly reducing the need for engineers involved in the development phase for a time. Coupled with the difficult trading conditions for 2015, the company gave this as a reason for the job cuts.

You’d think that given the size of the order book and the difficulty in employing the right staff, to make these reductions at this time for what would seem to be a brief period of cost reduction is a knee-jerk reaction. And as always it comes at a bad time for some workers.

The proposed job losses will impact across engineering, operations management and the support functions of the Aerospace Division, which accounts for about 31,000 across the world. That means about an 8 per cent reduction in the workforce. A significant number of employees – 675 – indicated an interest to leave the company.

Progress in talks between union representatives and the company has resulted in agreement for around 300 jobs to go before Christmas and in the first three months of 2015. Compulsory redundancies have been avoided thus far and would be avoided wherever possible.

Discussions also included analysis of the “do in house” as opposed to the buy strategy, and a review of the sub-contract work. This could contribute to the avoidance of compulsory redundancies.

The question remains: Has Rolls-Royce overreacted to financial considerations and placed itself in a situation where it risks losing skills and experience it should really keep?

‘Skills cannot be conjured up and then dispersed periodically.’

The company will also look to reduce costs across other parts of the group including the Land and Sea division. This will involve the marine, nuclear and Rolls-Royce Power Systems businesses, and could also result in job losses.

But the company has stressed that it would continue to recruit apprentices and graduates. It has made much of its investments in production facilities as it moves projects into the production phase, to bring them into the 21st century. One of these is a new £100 million advanced aerospace disc manufacturing facility in Washington, Tyne and Wear.

In a press release it said, “When fully operational in 2016, the 18,000m2 facility will have the capacity to manufacture 2,500 fan and turbine discs a year. These discs will feature in a wide-range of Trent aero engines including the world’s most efficient aero engine the Rolls-Royce Trent XWB. Fan Discs and Turbine Discs are at the heart of the engine, operating in extreme conditions providing the engine’s thrust.”

In addition, Tony Wood, President of Aerospace, Rolls-Royce said: “Rolls-Royce is committed to investing for future growth in order to deliver for our customers. We invested £687 million in facilities and equipment around the world last year.”

Rolls-Royce must demonstrate a continuing commitment to invest in the workforce with the skills needed to run this site. That cannot be conjured up then dispersed periodically.

At the official opening of the new plant in June, Deputy Prime Minister Nick Clegg and Business Secretary Vince Cable arrived to soak up the fine atmosphere among factory staff. Anxious for good publicity, they announced £45 million in joint government and industry funding for research led by Rolls-Royce to develop new technology for low-carbon aircraft engines.

Clegg said: “We should be really proud that the UK is the number one aerospace industry in Europe and a world leader in innovation. The highly skilled workers at the new Rolls-Royce factory are leading the charge for innovative technologies that are made in Britain.” Fine words on a fine occasion, but of course the government will do nothing to protect the skilled workforce some of whom are now at risk of dispersal.

In late 2015 another new Rolls-Royce site costing £60 million will open at Birmingham Business Park to supply the fuel control systems for engines. Both these sites are replacements for ageing buildings and will safeguard jobs, but not necessarily create any new ones.

Aerospace contributes £24 billion to the British economy every year, with hundreds of smaller businesses involved in supplying high-profile firms such as Rolls-Royce, and supports 230,000 jobs across the country. Money wasted propping up the Brussels bureaucracy machine could be used to invest further in the aerospace industry as part of Rebuilding Britain.