Don't let them bargain away defence! 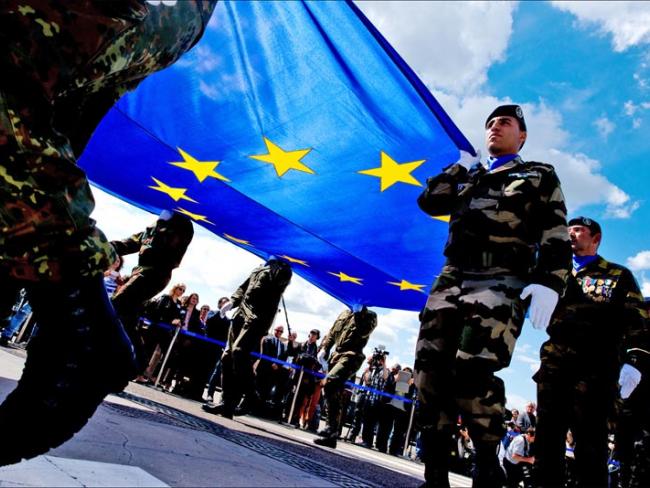 As Brexit negotiators prepare to enter the next round of talks with the EU, we are told the UK team headed by David Frost insists on the principle of sovereignty at every turn, to the annoyance of Michel Barnier and his team. Would it were really so – especially when it comes to defence.

When Boris Johnson promised to “get Brexit done’, people assumed change was imminent. The “new” Political Declaration would deliver the independence people voted for in the referendum.

In practice, there has been no substantial change, just a textual tweak here and there. The UK is still in effect working to the old Political “Surrender” Declaration agreed to by Theresa May. This is guiding the talks over the future relationship.

We have heard a lot about trading standards and level playing fields. There has been discussion across a wide spectrum of “key” issues, we are told. So surely that must include defence of our nation?

What could be more key to our sovereignty? Yet of that we hear not a word. The Government’s paper The Future relationship with the EU: The UK’s Approach to negotiations with the European Union, published on 27 February 2020, makes only an oblique reference to defence.

No matter what unlikely concessions may be wrung out of the EU on tariffs and trade, or even state aid, so long as defence and the defence industry are left quietly on the table Britain remains subject to the EU and its courts.

We may have left the EU in theory, but the Political Declaration still binds the UK to EU defence bodies and thus to EU policy and rules on security. It even compels us to join a new defence organisation during the transition period, one to which we did not previously belong as a member state.

Far from being an advantage to British industry, membership of EU defence bodies is an impediment. Lieutenant General Jonathon Riley of Veterans for Britain spelled out precisely why in an article published on 20 May in which he reminded people that the UK has the largest defence equipment budget in Europe – but that agreeing through the Declaration to a “level playing field” removes any advantage.

Brussels intends to create an EU-wide defence procurement market. To this end the Ministry of Defence is compelled to pursue an EU definition of “best value” which prohibits procurement standards being defined in the national interest, and prevents contracts from being kept at home to preserve jobs, investment or essential skills.

Bound by EU mechanisms and structures, the UK has already lost many large defence contracts to overseas shipbuilders, manufacturers and suppliers. During this transition period we remain subject to all the legal commitments of the EU. As the EU extends its scope, and we are forced to stay in its defence bodies, the situation can only become worse for British industry.

Agreement to EU defence policy is taking place by default. Ministers and researchers seem to be oblivious to the pitfalls in ceding authority to the EU. There is a suspicion that ministers are knowingly hiding the truth: over 20 obligatory structures, policies and rules are buried without cross-reference in the text of the Political Declaration.

The reach of the EU advances inexorably, secretly, and rapidly. Politicians and the press, perhaps distracted by Covid-19, have not kept pace so as to warn the electorate.

Riley explains that the advice ministers seek is from the same pool of deeply embedded Remainer officials at the Foreign Office, such as the Euro-Atlantic Security Policy Unit (EASP), who have since 2016 been lulling ministers into a false sense of security. These are the officials who will be interpreting any changes to the text.

Whatever the real reason for government silence on defence, we can’t depend on politicians to do our critical thinking for us. We will have to get to grips with this existential, war-or-peace question ourselves. The call to “Stay Alert” at the present time has more than one application.

Despite a certain lack of transparency, the bare bones of the Declaration are laid out for us in Part III, 99: “The Parties welcome close cooperation in Union-led crisis management missions and operations, both civilian and military.” So we have already agreed in principle to place our armed forces under the command of the EU and its tangle of interconnected agencies, units, operations and projects.

The way the EU is structured means that involvement in one defence body implies legal acceptance of the entire edifice. So it is wishful thinking to imagine that changing a word here or there would constitute rejection of EU military control.

There was a flutter of excitement when David Frost managed to dilute a phrase to avoid explicit UK collaboration in three pivotal EU defence components: the revised text runs “...the Parties agree to consider [membership] to the extent possible under the conditions of Union law”. So no promise of immediate attachment, apparently, but it still leaves Britain in the EU, still subject to the European Court of Justice, still expected to share our coveted defence budget for the next seven years within the EU Financial Framework.

Boris Johnson must be told:  this is not the offer of a relationship in which a sovereign country can choose to cooperate with its allies from a position of independence. This is not getting Brexit done.