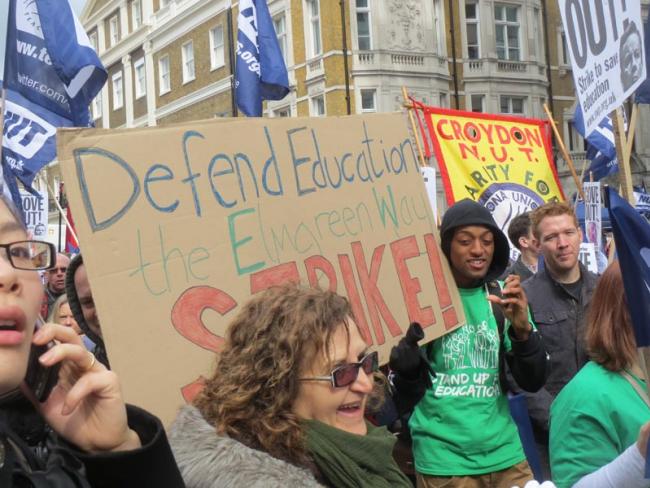 Teachers in the NUT, now part of the National Education Union, marching for pay in March 2014. Photo Workers.

The agreement will prevent infighting for support staff in Britain’s publicly funded state schools. But the merger itself has a negative side: the National Union of Teachers, rather than concentrate on its traditional core of teachers, is following the long-established – and failed – road of incorporation and takeover epitomised by recent GMB and Unite mergers.

The NEU is another example of the business trade union model at the centre of trade union executives’ thinking, be they self-proclaimed left or right. It fails to address the fragmentation of workforces and education provision, or to recognise the need to oppose market thinking in education.

Instead, the NEU follows the approach taken by Unison and GMB: no overall strategy; taking a small minded, local approach; ignoring changes in education provision over the last 30 years; poaching each other’s members week in week out, wasting time and effort and treating members like sheep. The only disruptive tactic Unison and GMB have in their arsenal is industrial action in schools, again treating members as passive, since even that action is only on the coat tails of the teachers.

At the same time, any steps to strengthen joint trade union unity – NEU, Unison, GMB (and Unite to a lesser degree) – within the workplace and against the employer will be positive. Rivalry and competition lead only to division and failure. Unity and new tactics have to be the order of the day.