Every empire needs an army – especially the EU 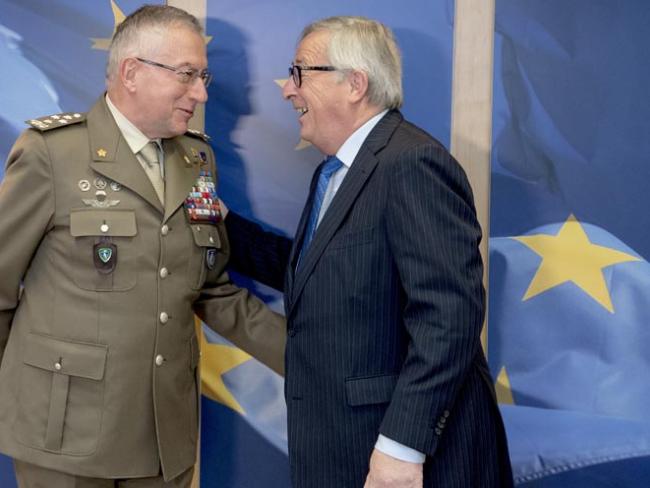 Boris Johnson has left Theresa May’s Remainer deal intact on defence matters. It would keep us in the EU through three commitments: the European Defence Agency, the European Defence Fund and the Permanent Structured Cooperation (PESCO). All bind us into the EU’s Common Security and Defence Policy.

May made these commitments in June 2017 – behind Parliament’s back – after our decision to leave the EU. Nothing that Boris Johnson announced on 17 October changes this.

These commitments add up to the European Defence Union (EDU), which is structured so that the EU would have an army without any visible difference in member state militaries. The government has tied us into these measures and has prevented any proper scrutiny of what it has done. This would not be leaving the EU.

The European Commission’s list of competences states that the EU has the power to implement a Common Foreign and Security Policy, which includes a common defence policy. Britain would lose national competence in defence. The Ministry of Defence’s Director-General of Strategy, Angus Lapsley, has said that “defence is no longer a member-state preserve in the EU”. He also said, “We like the EU Global Strategy.”

Arnout Molenaar, a senior defence advisor on the staff of Federica Mogherini, the previous EU High Representative for Foreign Affairs and Security Policy, said in April this year that after putting all the structures in place, the EU must now deliver on its promises and implement initiatives such as PESCO and the European Defence Fund.

Ursula von der Leyen, former German defence minister and now the incoming president of the European Commission, said in July, “just two or three weeks ago, for the first time, we were able to give the green light for a European command capacity in Brussels. That is the first time that military and civil instruments would be commanded together, where these commands would come from one single command office. This is a major step forward. It was unthinkable a short while ago, but it’s precisely the right approach to have if we want a European flavour to our defence policy.”

‘The government has tied us into these measures…’

She has form on this. At the Munich Security Conference in February 2019, von der Leyen said, “Germany is in favour of adopting the majority principle in European foreign policy decisions.” She and former British Prime Minister Tony Blair both said that the EU would wish to pursue interventionist policies in Africa, a continent, she said, where NATO has no real interest. A European empire needs a European army.

The obligatory continuation of the EU’s 2011 Defence and Security Procurement Directive would force the government to stop giving contracts to British companies and make it buy instead from the cheapest company in the EU. This would take away our strategic shipbuilding capability and destroy British jobs and skills.

Our defence, security, aerospace and space industries employ 374,000 people. Our maritime industrial sector alone employs 111,000 people and contributes £13 billion to the economy. The only way to ensure that these industrial assets stay in Britain is to pull out of the 2011 EU Directive. The Conservative 2017 election manifesto pledged to take account of the domestic gains from investment and jobs in these industries. Instead, the May government issued a shipbuilding strategy in line with the EU Directive.

Veterans for Britain, an organisation of retired senior officers of all three services, and others has worked hard to raise these issues over several years. It has written letters to the press, set up an excellent website (http://veteransforbritain.uk), spoken at conferences and lobbied parliamentarians.

But most MPs and Lords have ignored the information provided. When Lord Bridges, a former minister in Cameron’s government who voted to Remain, raised these concerns in the Lords recently, he was derided and told to sit down and shut up.

On 2 September a conference was held at the Royal United Services Institute on “EU Defence Union – the threat to democracy, industry and alliances”. It examined the consequences for the UK if the defence and security sections of May’s Brexit “deal” and its associated Political Declaration on the Future Relationship were approved.

Lord James of Blackheath attended and as agreed he raised this in the House of Lords four days later. He said that although the problems that might arise from leaving the EU without a deal were well publicised, there is far less awareness about what will happen if we do not leave without a deal. He said the most important of these is the European Defence Union.

He said, “…the British public…know nothing about it officially. Can we please have a proper account of what it entails? Is it true that the government have entered into private agreements with the European Community that they will, on completion of remain or whatever it is to be, transfer to the European Union in Brussels the entire control of our entire fighting forces, including all their equipment?”

Lord James went on to ask about armed forces being asked to take an oath of loyalty to the EU and not the British Crown, about preparations for the transfer of command and control centres, and for the EU to take control of British intelligence services.

At this point, Lord Blunkett, former Home Secretary under Blair, intervened in mid-sentence with what seemed a threat: “…I appeal to him to conclude, because it is not in either his interests or the interests of the Committee for him to continue.”

‘Most MPs and Lords have ignored the information provided…’

Later Lord James was approached by former Defence Secretary and NATO Secretary General Lord Robertson, who, incandescent with rage, demanded to know his sources for the statements he had made. His sources are available to anyone who visits the Veterans for Britain website. All Lord James added was to call on the government to come clean on their intentions so that the public can make an informed choice.

Since then, other members of the House of Lords have demanded that Lord James resign immediately, and have told him to retract his comments and say no more on these matters. But it’s too late as video footage of the speech has received wide public distribution on Twitter.

The attacks on Lord James are because this is the first time the EDU has been raised in such a public political forum. According to former Admiral Roger Lane-Knott, James’s speech breached a pact between the Tory and Labour parties, made as long ago as 2015, to say nothing about the EDU.

Everything is linked to everything else in the EU; it is an organisation which is all about integration and not cooperation. The government could and should pass a statutory instrument withdrawing us from all these arrangements. The May government made these agreements under royal prerogative, days after our referendum decision should have ruled them out.