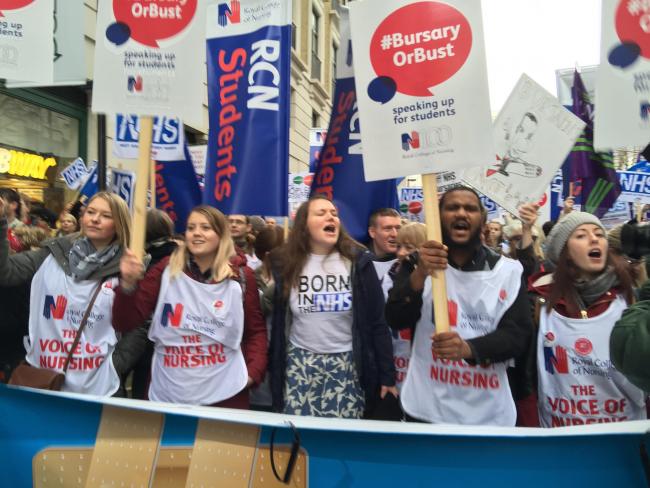 Student nurses marching in 2016 against the introduction of bursaries. Predictions at the time that this would put off potential students have been shown to be right. Photo Workers.

A further shortage of nurses in the NHS is looming, fuelled by an unfulfilled need to plan for and train staff. That’s due to high fees and the loss of the student bursary in England, not Brexit. In the spring of 2016 Unison’s then Head of Health, Christina McAnea, predicted that “Replacing the bursary system with loans will put off many potential students, not encourage more people into our caring professions.” And so it has proved for the nursing profession, according to recently released figures.

Data from the Universities and Colleges Admission Services show that the number of people in England applying to begin nursing degrees fell from 51,840 in 2016 to 35,260 in 2018 – a decline of over 30 per cent.

From August 2017 students have had to take out loans to cover tuition fees of £9,000 a year, and even more for subsistence. Nurses and midwives will pay the entire bill for their training, even though they spend half their training time working for the NHS on clinical placement.

Earlier in the year there were signs of recognition that planning the NHS workforce – especially for nursing – needs to be rethought. The NHS in England published a draft workforce strategy, for the first time in 25 years, which stated that there had been historical failings in NHS workforce planning.

Currently you could be forgiven for thinking that all NHS workforce problems were due to Brexit. But the draft strategy said “…maximising the self-supply of our workforce is critical. It cannot be right for the NHS to draw staff from other countries in large numbers just because we have failed to plan and invest.” Brexit had done a marvellous thing: it had made the NHS think seriously about workforce planning for the first time in decades.

The finalised workforce strategy was due to be published in July to coincide with the 70th anniversary of the NHS. What better birthday present could the NHS have had than a proper plan for, and investment in, the workforce? However, July and August have come and gone, with no sign of the new strategy. The latest figures for nursing applications make publication and action even more urgent.

John Worth, a first-year student nurse, recently started a petition calling for students to be paid whilst on clinical placement. It has already attracted over 50,000 signatures, but the nursing profession can’t rely on first-year students to do the fighting as that is a kind of exploitation too. As things stand, student nurses in England are paying to work. That deterrent is the most significant factor affecting the long-term supply of nurses.