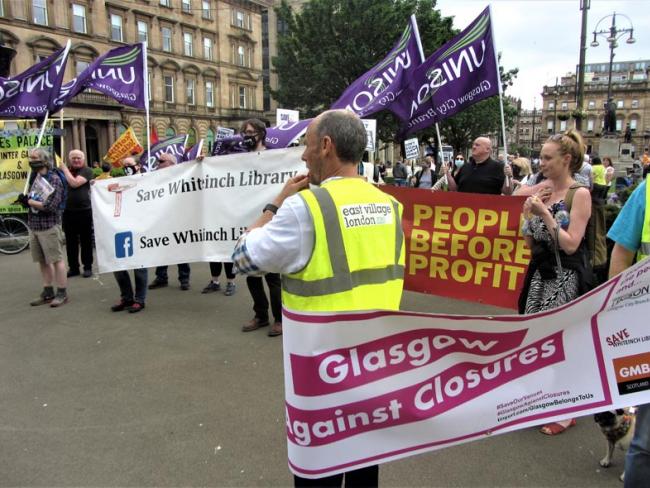 On Saturday 5 June trade unions and local communities came together in a rally in George Square in central Glasgow. It was the first time in several weeks of campaigning against the closure of libraries and other venues, that the various action groups had come together in at united display of anger at Glasgow City Council – and its “arms-length” cultural body Glasgow Life.

The campaigners’ strength was emphasised by their keeping the weekly read-ins and picketting going at the local libraries under threat, while the rally proceeded. There was visible support from local branches of trade unions such as GMB, Unison and Unite, as well as from Glasgow Trades Council.

Many see their activity as part of the long running national campaign against library closures and rundowns, with one activist displaying the logo of a similar campaign in Devon. She is Ruth Gillett of the Friends of People's Palace, Winter Gardens & Glasgow Green, fighting to preserve a large area of Glasgow long seen as belonging directly to the people of the city. She welcomed a photograph being taken of their newly created banner, and told Workers it was made by artist Stasia Rice. Their representative spoke at the rally before it marched the short distance to the City Council building.

An umbrella campaign, Glasgow Against Closures, has been set up to coordinate further action.