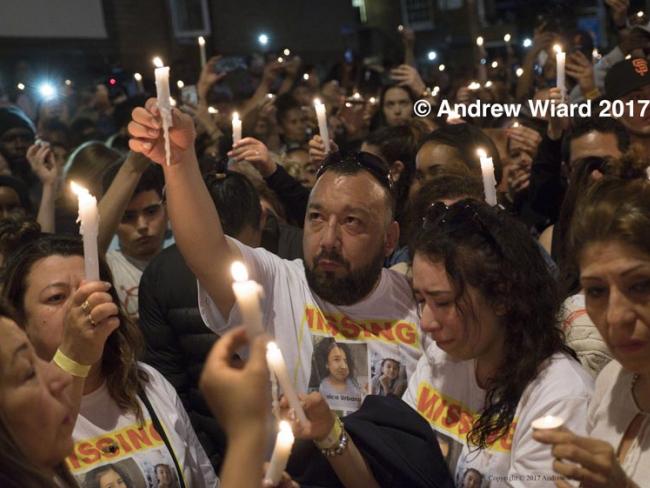 16 June, London: Torchlight vigil with family and friends of the dead and missing, here the family of Jessica Urbano. Photo © Andrew Wiard 2017.

Alongside the terrorist outrages of the past two months, the horrific fire which swept through a Kensington tower block on 15 June stands apart as a wholly preventable event.

With the high number of deaths by fire at Grenfell Tower being reported, another story is emerging: deliberate, planned destruction over years of rules designed to keep the populace safe. Successive governments, Labour and Conservative, have dumped their responsibility to plan for public safety, instead deregulating so that profiteers can flourish.

A letter in the Daily Telegraph on 16 June from a former Greater London Council district surveyor describes how, after the Great Fire of London, construction was controlled by the London Building Acts of 1667 and associated bylaws. These were enforced with statutory powers by a team of surveyors and officers independent of national and local government. Owners of defective buildings were rigorously prosecuted. This service was replaced in 1985 by the Thatcher government with a system controlled by “politicians and accountants”. The letter states that the Grenfell Tower fire could not have happened under the GLC.

The 1997 Labour government showed contempt for professional and technical experts, scrapping fire certificates and handing over the responsibility for building safety to landlords and owners. The story since is of decreasing safety enforcement by successive governments. Fire brigades have been cut, and services to the private sector. Contracts have gone to the cheapest responsibility bidders. In 2014 the housing minister said that the installation of sprinklers was “the responsibility of the fire industry rather than the government”.