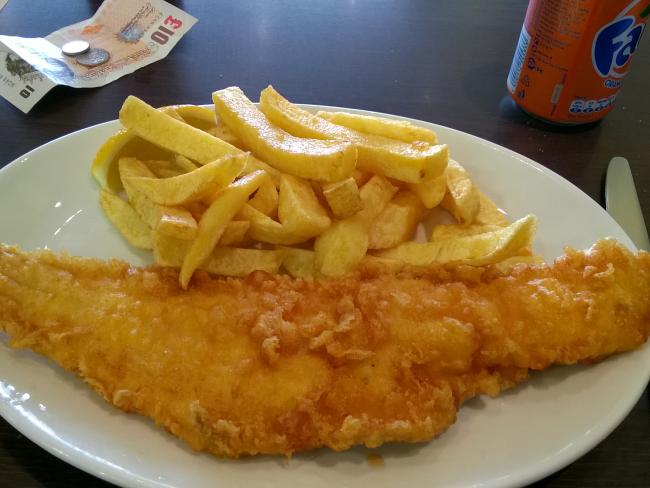 Fish and chips won’t be so affordable in future. Photo Mikey via Flickr (CC BY 2.0)

Fish and chips, once an affordable take-away meal, is becoming more and more expensive. And this illustrates much of what’s wrong with Britain’s food policy.

The president of the National Federation of Fish Friers is reported in the Financial Times as saying that 32oz cod fillets, which used to cost £140 a case wholesale, are now selling at £270 a case. “We have undersold our product for a long time,” he said, ominously.

Seafish, the seafood industry body previously reported a boom in fish and chip shop business during the pandemic. That may be about to change. Some fish and chip shops have already increased portion prices by 20 per cent.

Several factors are behind the price increases. Firstly, VAT was reduced for fish and chip shops during the pandemic, but was restored to the full rate in April.

Seafood warned that 35 to 45 per cent of the white fish we eat is caught by Russian fleets from the Barents Sea, north of Scandinavia, and subject to a 35 per cent tariff.

The price of cooking oil has rocketed too. Wholesale prices of sunflower oil have increased by more than 150 per cent, with a knock-on effect on other fats. And fertiliser shortages have contributed to problems in the supply of potatoes.

There could be no clearer indication of the need for an independent British food policy that allows us to develop our agriculture and fisheries.

Although there is debate about the best frying medium for fish and chips, beef dripping is highly favoured and, if our abattoirs had not been run down, could be used more widely. As a result of decades of agricultural research, British potatoes are far better suited to making chips than imported varieties.

Fertiliser shortages ought to be a thing of the past, if sufficient investment were put into projects like the Woodsmith potash and polyhalite mine, reported in Workers.

Above all, with a renewed and expanded national fishing fleet, fish currently pillaged from our waters by foreign supertrawlers could be consumed here.

Abattoirs under attack
Bouncing back: the return of British fruit [print version]
A reservoir of fruit genetics [print version]
Poverty and riches - the sad tale of Britain's food
Food - we need a long-term plan