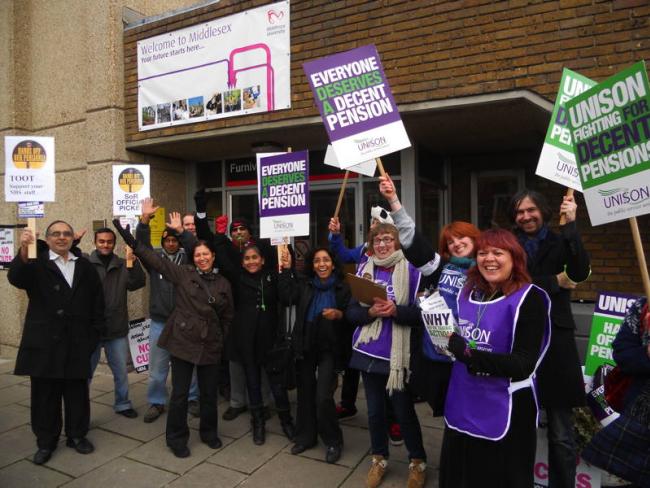 30 November 2011: public sector workers on strike in defence of their pensions. Photo Workers.

With all the vitriol and poison its author, Michael Johnson, can sum up, the report attacks the scheme as being “‘abysmally ineffective”, “an expensive work of fiction”, “expensive to run”, and so on. It mixes fact with fiction to try to deny that the billions held by local authorities and related public bodies in pension funds – over £25 billion in London alone – are increasing in value, are paying their way, and are surviving despite both Labour and Conservative government attacks and changes on the scheme during the past ten years.

The author’s links with finance and the Conservative Party go deep. Johnson, who trained with J P Morgan in New York and spent 21 years in venture capital, was responsible for the running of the so-called Economic Competitiveness Policy Group set up by David Cameron in 2005.

Changes imposed by the last three governments, and the crippling accrual rate, include the continually changing accountancy basis, ensure the scheme can never get out of theoretical paper debts, while employers are encouraged to opt out of the scheme or to reduce their contributions by tricks such as pensions holidays.

The report fails to refer to the mismanagement of most if not all private sector pension schemes and their excessive costs involved. Nor does it mention their incestuous relationship with the Tory Party.

After the Local Government Pension Scheme will come the attack on the NHS, Teachers and Civil Service schemes and all pension schemes that deliver pension benefits tied to defined final salary scheme.

Why the attack? Because after the government “liberated” the private sector schemes and encouraged massive looting of workers’ pensions, it couldn't wait to get its hands on the billions tied up in the public sector schemes.

Chancellor George Osborne’s attempts to use public sector pension schemes as a reservoir for infrastructure building have failed miserably, so the attack will be to eradicate the schemes’ basis yet again. Once more the pension schemes and the trade unions which have fought for decades to achieve them need to look to their defences.