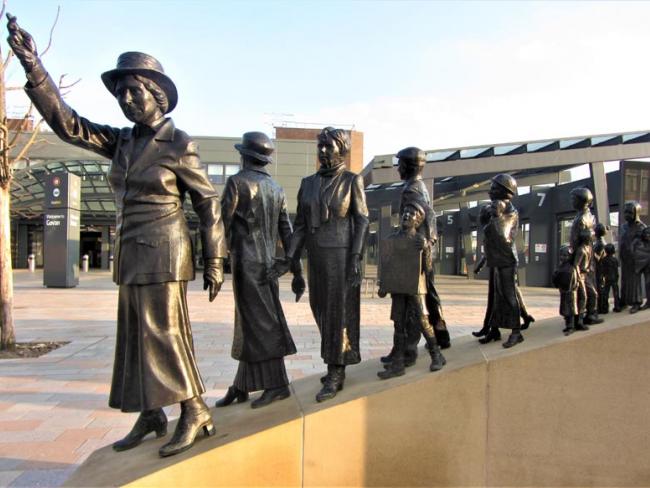 Govan, Glasgow: bronzes commissioned to celebrate the centenary of the 1915 rent strikes in Glasgow, unveiled in 2018. The bronzes are the work of Andrew Brown who designed them in the Sussex Sculpture Studios, Billingshurst, which he helped to found. Photo Workers.

The events of a century ago in Glasgow were a milestone in decades of struggle by organised industrial workers. They came at a high point of class struggle in Britain as similar events played out elsewhere during 1919.

These events are either denigrated as an isolated “riot” or exaggerated as a failed revolution. Neither is true. Nor was this in any sense an anti-English conflict.

The British working class had begun to exercise its industrial strength before the first world war. And class struggle reached new levels during the war. Large numbers of workers termed “unskilled” were encouraged to join trade unions. Women workers became an important part of the trade union movement. Out of all this, strong shop stewards’ organisations evolved, directly representing workers at the workplace.

The war years saw growing crises in housing and food supply, especially in industrial cities like Glasgow, one of Britain’s major manufacturing hubs. In the decade up to 1914, Clydeside built half the world's shipping tonnage – an industry linked to nearby coal mining and steel production.

The scene was set for confrontation with the imposition of the Dilution of Labour Act and Munitions Act in 1915. The arrival of thousands of “dilutees” undercut wages and conditions workers had fought for. And it worsened already overcrowded housing and the supply of food. As well as Glasgow, the industrial cities of Sheffield and Newcastle were chosen to enforce this regime.

The crisis was Britain-wide. Prime Minster Lloyd George saw fit to come to Glasgow himself in December 1915 to address 3,000 workers in St Andrew’s Hall, as did the leader of the Labour Party, Arthur Henderson.

The Clyde Workers Committee (CWC) ensured that the most militant filled the hall to shout them down. The newspaper Forward reported this humiliation. The government closed it down within days and confiscated copies from newsagents.

A week later the CWC issued its own newspaper, The Worker. In turn that was suppressed after five editions and its editorial team received prison sentences of up to a year.

The CWC model inspired industrial workers around the country to organise. Over the next three years around 300 similar bodies came into being. Usually termed Councils of Action, they often incorporated trades councils. They developed in Belfast, Birmingham, Liverpool, London, and Manchester as well as areas of Wales and elsewhere in England – in the North East, Yorkshire, the Midlands and the South East.

From 1915 onwards social protest had developed alongside industrial struggle. In Glasgow this took the form of rent strikes against unscrupulous landlords who raised rents, taking advantage of the absence of husbands and sons serving in the British forces.

Local Glasgow women led the action, including Mary Barbour, who coordinated the protests with the Clyde Workers Committee. In 2018 their successful campaigns were honoured by the unveiling of bronzes portraying “Mary Barbour's Army” in Glasgow's Govan district, where she had lived.

By 1919, the continuation of harsh conditions, long working hours and undercutting by imported cheap labour dashed hopes of a better life in peacetime. Returning soldiers, sailors and civilians alike were unsurprisingly angry and desired action. Their thoughts were also spurred by news of workers attempting to take power into their own hands in Russia, Hungary and Germany.

Nevertheless, strikes called by the CWC a few weeks after the end of the war focused on achieving a 40-hour week. The action started on Monday 27 January 1919, closing most factories. Picketing was boosted by the presence of families and women from the earlier rent strike campaigns.

The strike was not confined to Glasgow. Miners struck in Lanarkshire and occupied their union headquarters. In Belfast the action by workers in transport, gas and electricity companies straddled the religious divide.

Four days later, on Friday 31 January, the strikers held a mass rally in Glasgow’s George Square. They sent a delegation to the Lord Provost of the city to discuss the response to their demands.

The police charged the crowd with batons; it is unclear what prompted this. Some reports say it was the attempt of strikers to halt passing trams which they viewed as being operated by strike-breakers.

At this point the myth-making starts. Subsequent accounts, never substantiated, talk of tanks being deployed, of machine gun nests being set up and local soldiers being confined to barracks. The only weapons ever photographed were standard police batons.

A photo of a tank in the city centre used for decades by The Glasgow Herald  to say “a tank rolls through the crowds” in Glasgow's George Square in 1919, has been proven to be from January 1918 when “Julian the Tank” was used to encourage people to buy War Bonds!

Despite injuries, there were no fatalities that day. Compared to the Peterloo Massacre and other murderous events, what happened in January 1919 should not be called “Bloody Friday”. The CWC and the Councils of Action continued their campaigning unabated, although they did not win the fight for 40 hours at that time.

The following summer saw many of the individuals involved participate in the Communist Unity Convention, to found a communist party for Britain. Workers’ discontent and action continued, leading up to the general strike of 1926. But by then the whole movement was marred by increasing absorption into parliamentarianism and domination by the Labour Party.

In Scotland, progress was further weakened by an increasingly separatist mindset under the influence of John Maclean and Hugh MacDiarmid, eventually channelled into calls for “devolution”.