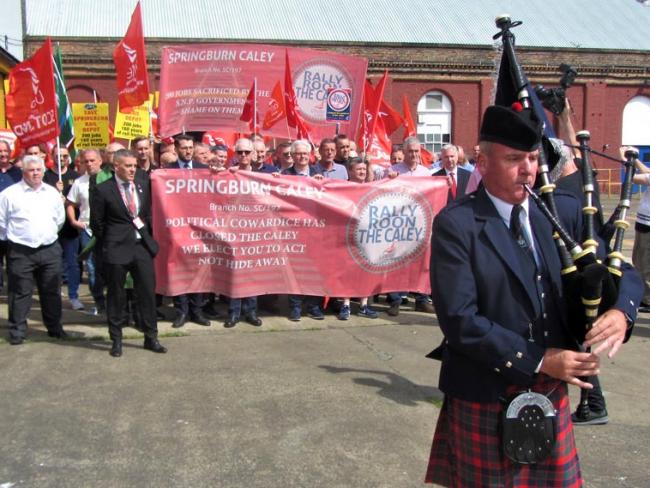 Friday 26 July: workers march out of the factory marking the final closure of the “Caley” rail works in Springburn, Glasgow. The main banner is clearly aimed at the SNP administration. Photo Workers.

Workers from North Glasgow’s famous “Caley” railyard have left their workplace for what looks to be the last time. The yard is a proud local and national industrial asset that has been operating since the 1850s, but has been threatened with closure since the current owner, Gemini Rail Services, announced its intention to wind up the yard in December of last year.

Over 200 skilled jobs will be lost as a result of the closure of the yard, which is located in one of Glasgow’s most deprived areas.

In his speech to a large crowd containing many members of the local community, Unite officer Pat Mcilvogue condemned the SNP leadership at Holyrood for their lack of interest in bringing the yard into public ownership, which brought loud applause from the crowd.

This event further exposes the falsehood that the separatist SNP is a party that represents the interests of the working-class, and shows the shape of things to come in the event that the nationalists pull Scotland out of the United Kingdom.