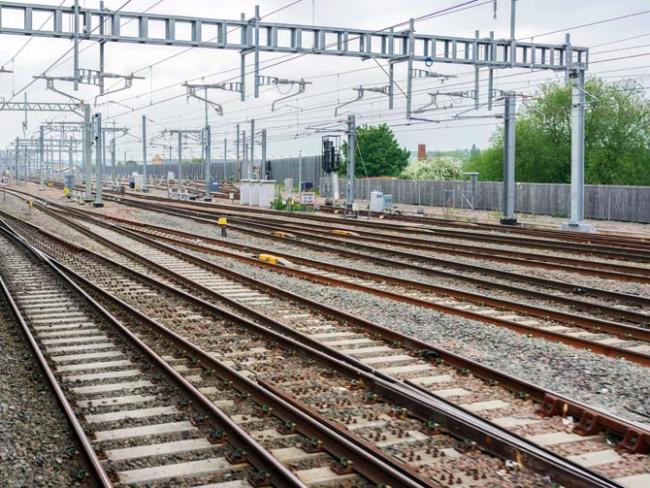 Newly electrified track on the Great Western Line from London to Bristol. Now the plug has been pulled on electrification to Cardiff and Swansea. Photo Sterling Images/shutterstock.com

Beset by EU-dictated cost rises, the transport secretary is cancelling a raft of plans to extend electrification across the rail network. The move has sparked fierce opposition, and not a little ridicule…

A huge political storm is brewing after Secretary of State Chris Grayling announced that the government was scrapping plans to electrify the northern end of the line between London and Derby, Nottingham and Sheffield.

In a statement, Grayling extolled the virtues of cancellation. It would not be necessary to disrupt rail services for the electrification works, and those living near the railway would not have their views of the landscape spoiled by unsightly masts and wires! He went on to suggest that new trains didn’t need electric wires as the technology now existed for them to generate electricity on the train using diesel engines or hydrogen, or run on batteries.

Grayling’s announcement was greeted with derision by the rail trade unions. ASLEF general secretary Mick Whelan ridiculed Grayling. He pointed out, as should have been obvious to Grayling, that equipping electric trains with additional diesel engines made them more expensive and more complicated and so inherently more unreliable.

Such trains will also be slower to accelerate and cause more track wear as the additional diesel engines will make them much heavier. And the decision flies in the face of recent concerns about the particulate pollution caused by diesel fuelled engines. TSSA reacted to the move by starting a campaign to reverse the axing of electrification plans.

Local politicians in the East Midlands, the North and Wales all condemned the government, accusing Grayling of breaking promises, and pointing out the loss of economic benefits flowing from the better train services that electrification brings.

The government’s move comes after costs associated with the electrification of the Great Western line from London to Bristol and Cardiff have nearly tripled from initial estimates. There will now be no wires from Cardiff to Swansea, and there is doubt over whether or not the wires will reach Oxford or Bath. These costs are being off-set by the retro-fitting of electric trains with diesel engines. Whilst the new electric trains are being delivered for local services, they will have no wires to draw power from!

The reasons for the spiralling costs of electrification arise from a number of factors. Network Rail (and the rail industry in general) is short of skilled staff in both engineering and project management disciplines, and this is getting worse.

But much more significant is the massive “overengineering” of the work, driven by Network Rail’s seeming obsession to comply with EU standards for electrification that are completely unnecessary. The work could be done considerably cheaper if the EU standards were ignored and the new equipment was to a similar standard as existing British equipment.

Doubtless driven by the controversy around the costs of electrifying the Great Western route, Network Rail has embarked upon reviewing its standards, including those for electrification.

And it is no coincidence that within days of Grayling’s announcement about electrification, the Hansford Review was published. It accused Network Rail of being “risk averse” and spending far too much on “gold plated” rail network upgrades such as electrification. Hansford advocates reducing costs by handing this work over to private contractors to carry out.

The report was attacked by TSSA General Secretary Manuel Cortes. “This is the sixth report that the Tories have commissioned into how to introduce the market into Network Rail (NR) since 2011 and it’s the most reckless yet,” he said. “Their continued obsession with flogging off Britain’s national assets is breathtaking and it plays fast and loose with passenger safety.”

Cortes referred to the Hansford Review’s proposal that what are effectively Private Finance Initiatives should be introduced for investment in new infrastructure, resulting in the private sector making huge profits while taxpayers bear the financial risks.

He also warned about the undermining of safety, saying: “…the idiocy becomes truly dangerous with Hansford’s ridiculous proposal that railway signalling could be separated from the coordination of traffic on the network. Even a child railway enthusiast knows that proposal will simply increase the risk of accidents on the network.”

Meanwhile the Railway Industry Association (RIA) has warned MPs that the downturn in Network Rail renewals work together with the lack of enhancement development work for the coming funding period pose a significant threat to the forward programme of work for the railway network and its supply chain, and therefore to the highly skilled contractor workforce.

The RIA Director General had previously urged its rail supply members to pressure the government to make up a £500 million shortfall in Network Rail renewals funding between now and March 2019.