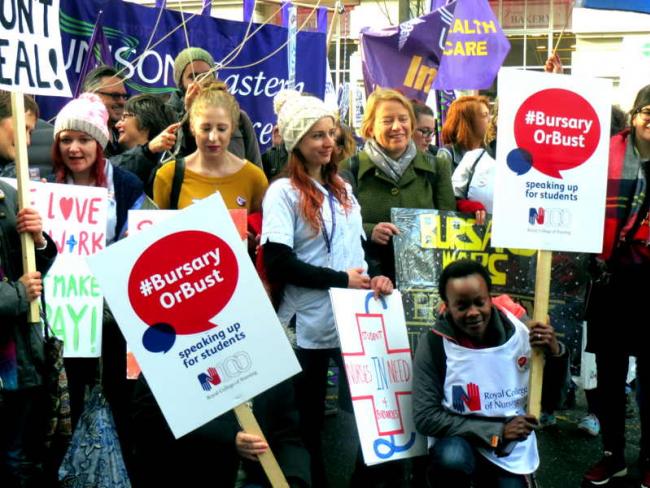 The government has confirmed it will definitely be pushing student nurses and other health care students into debts of at least £50,000 each by scrapping the NHS bursary. From August 2017 students will have to take out loans for £9,000 in tuition fees and further loans for subsistence. They will be paying the entire bill for their training, even though nurses spend 50 per cent of their training time working for the NHS on clinical placements, and their starting salary is £22,799.

The Department of Health is currently conducting a “consultation”. But this is no consultation on the substance, rather a piffling discussion about how it intends to implement this change. It is a classic example of government taking a decision by-passing parliament altogether. No debate in parliament, no parliamentary vote – just a minor adjustment to a statutory instrument. This is how something is enacted which could devastate the NHS workforce, and therefore the entire NHS.

Those most affected are yet to join the profession. So the onus has fallen on current students and their teaching staff to somehow bring the matter to the attention of the country and expose the government plan to make this change. Led by Unison and with support from the National Union of Students and other organisations, there is to be a joint lobby of Parliament on 25 May.

Unison head of health Christina McAnea said: “Replacing the bursary system with loans will put off many potential students, not encourage more people into our caring professions…

“The UK already has to import staff from overseas just to keep the NHS going, and nothing in this consultation will change that. Worryingly, it looks like ministers don’t plan to stop at health professionals. The consultation suggests that bursaries for social workers could be next in line.”