Housing at the mercy of speculators and the EU 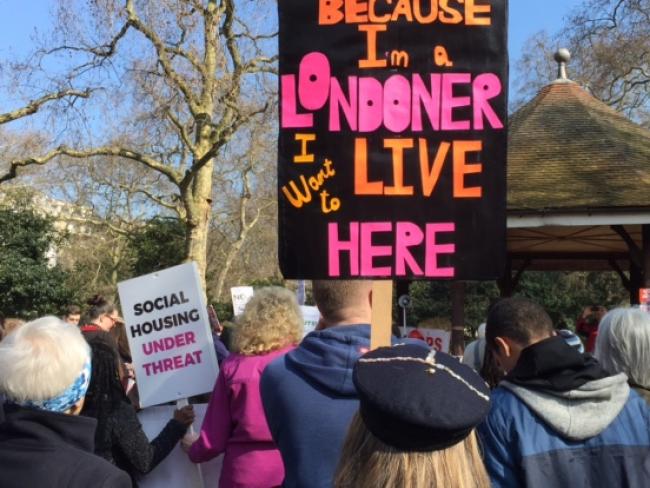 Demonstrating against the loss of social housing. Photo Workers.

The government is running down social housing and undermining the ability of housing associations and local authorities to meet housing need. It also intends to prime the market for foreign takeover. Fearing that Britain may exit the EU and create a hostile environment for speculators, firms are already leaping into the property scrum.

Even before the ink is dry on the Housing Bill a French private developer, IPERL, managed by one Marc Bonjour, has been conducting talks with the CEOs of several large housing associations. The proposal is to use pension funds to buy and build blocks in prime locations, then sell the freehold to investors at a discount. Housing associations would then buy the rights at reduced VAT for social letting – but only for a limited period before the property reverts to the developer. That’s “bonjour richesse!” but “au revoir” to housing for need.

Arriva Investors have also launched a scheme using pension funds to buy council land for private rent with some token social rentals. Another player is Octopus, which in 2015 got its tentacles into the right to buy market through a joint venture with private developer QSH. Cheyne Capital has set up the Social Property Impact Fund, while merchant bank Salamanca Group has launched Funding Affordable Homes. Don’t be fooled by the names, the idea behind all of them is similar – to leech off the housing market.

If Britain votes to remain in the EU and TTIP goes ahead, we can expect that the privatisation of social housing along EU or US lines will speed up. Continental European criteria for social renting have always differed from those in Britain. Here the emphasis has historically been to create mixed, sustainable communities rather than ghettos of the very poor, single-parent families or the elderly.

‘Existing social housing tenants will be forced to pay market rents or leave.’

The EU, however, has been working for years to bar employed households on moderate incomes from applying for social housing. The UK government announced last summer that it would do the same and more, under the name of “Pay to Stay”. Existing social housing tenants will be forced to pay market rents or leave if the income of the whole household is above £30,000 (£40,000 in London).

This is an example of the EU taking powers and changing policy in areas which are supposed to be controlled by national governments. (Remember “subsidiarity”, the policy that the EU would allow decisions by member states – it was always a myth.) Now the UK government, with cross-party consent, has embraced EU policy for its own ideological ends.

Even council house allocations are in effect governed by the EU. Yet councils won't tell a family waiting five years to be housed that people resident in the neighbourhood for only two years could take precedence under the recently changed EU rules.

The answer is not to embrace the “protection” of the EU. Instead, let's vote to get out of this morass, sling out the parasites, and start to take charge of our lives again!