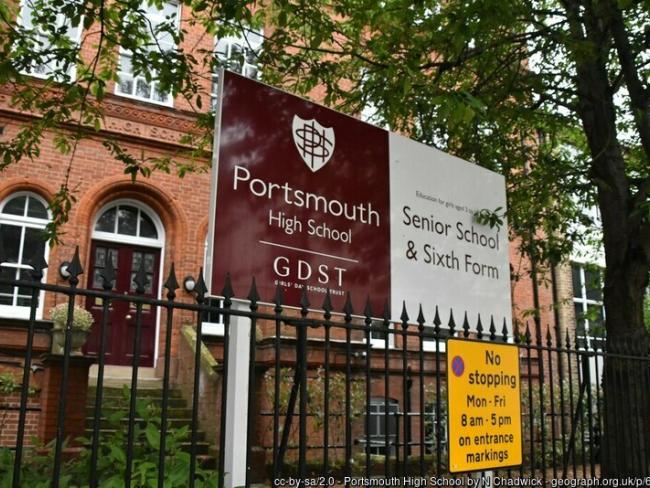 Portsmouth High School, part of the 23-school Girls’ Day School Trust where teachers have voted for action against plans to pull out of the Teachers’ Pension Scheme. Photo N Chadwick/
geograph.org.uk
(CC-BY-SA 2.0).

This article, published on 4 February before strike action started, was updated on 23 February.

Teachers in 23 independent schools run by the Girls’ Day School Trust voted overwhelmingly to strike after their employer said it would withdraw from the Teachers’ Pension Scheme. Some 1,500 teachers were expected to be involved in the action.

The first strike day, on 10 February, saw high levels of involvement, with picket lines outside schools. Five more strike days were due between 23 February and 3 March. More than 70 per cent of the trust’s teaching staff belong to the National Education Union, and on a turnout of 84 per cent, 95 per cent voted to strike – the first in the trust’s 149-year history.

Independent schools have been rushing to opt out of the pension scheme since the government changed the rate used to calculate the liabilities of public sector schemes. As a result, employer contributions rose from 16.48 per cent to 23.6 per cent in 2019.

Independent schools have to meet this increase themselves, unlike state schools where the government is (so far) still funding it. Under the trust’s proposal, teachers would be at least 20 per cent worse off when they receive their pensions. Like all teachers, they have already suffered a decline in real pay over several years, with increases below inflation and a pay freeze throughout the last academic year. Losing the Teachers’ Pension Scheme would be an even bigger financial blow.

The trust’s finances, meanwhile, show a healthy annual surplus. It can afford to pay, but instead has threatened to “fire and rehire” its teachers to force through the change in contracts. This added to the teachers’ anger leading up to the vote.

“Be in no doubt that this is an attack on members’ terms and conditions of employment,” said Kevin Courtney, joint general secretary of the National Education Union. “The threat of ‘fire and rehire’ before so much as a word of consultation is all the evidence you need. It is also telling that the Trust has made no compelling argument to make this change to staff pensions. This is because they do not have one.”