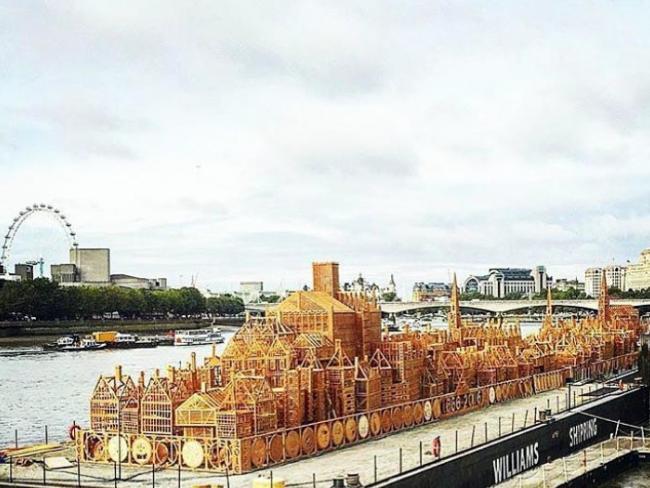 Model of City before the Fire, constructed by carpentry apprentices over many months, ready to be floated in flames down Thames on 4 September. Photo Workers.

As London commemorates 350 years since the Great Fire of 2 September 1666, we are reminded of what a real catastrophe looks like – unlike the spurious and risible warnings of the “disaster” of Brexit, created like a superstition entirely in the minds of europhiles contrary to all evidence.

There are other parallels. In 1665 the economy of the City had been blighted (by the plague) and was beginning to affect the rest of England. The Fire ended the plague and “purified” the City. In the spring of 2016 Britain was still suffering the deliberately inflamed contagion of economic depression. Had it not been for Brexit, this would have continued.

Surveying old St Paul’s before the Fire, “expert opinion” in the form of established architect Roger Pratt denied the scientific evidence of the younger and as yet un-established Christopher Wren’s plumb lines and geometry: that the cathedral was in danger of collapse.

On 23 June 2016 the majority of the British people, ignored, misunderstood, and incorrectly analysed, defied the rigid “expert” opinion of the entire European establishment. Sooner or later, the EU would collapse; the working class judged it prudent to get out of the way in time.

The City Lord Mayor in 1666 was fat cat Thomas Bloodworth. He too was in denial. Common sense dictated pulling down houses to stop the progress of the inferno: lacking all sense of the gravity of the situation, he refused permission, claiming that “a woman might piss it out”. He took the deluded path of the capitalist down the ages – short-term avoidance of the cost of rebuilding.

While individuals took swift action to protect what little they could of their fortunes, Bloodworth’s arrogant decision to refuse outside help, even from the King, cost England dear.

One hundred thousand citizens were relegated to destitution – homeless refugees in their own land. The diarist Samuel Pepys described how he wept for his city.

Panic took hold as rumours of a French invasion spread: the English navy was already engaged with the Dutch fleet in the Channel. The threat of war was a feature of Cameron's pro-EU propaganda too. In the event of a Brexit, many on the Remain side were ready to believe World War Three was around the corner.

With the Fire still smouldering, Londoners began to pick up the pieces of their lives. They found premises and coordinated the revival of trade. No excuses for delay were accepted. They organised emergency centres, markets and food distribution. Surrounding suburbs were ordered to take in the homeless from their temporary shelters. The rich discovered what it was like to be robbed by landlords greedily exploiting catastrophe. The Fire was seen as a test of the whole nation.

Today there is no cause for post-Brexit panic or mourning. Rather it is a time for seizing opportunities. Economic Armageddon didn’t happen. Mortgage rates, property prices, and unemployment figures went down.

Manufacturing, tourism and retail have been on the up. For all their reservations, farmers, scientists, City traders and creative workers have mostly decided to take a positive negotiating stance. Even the Europhile press is beginning to look on the bright side.

In Rio British sports men and women surpassed even the spirit of the 2012 London Games, and cheered everyone up on their return.

The hated TTIP shows signs of faltering in the wake of the British vote, while non-EU countries are lining up to trade with us.

Medieval London was rebuilt by new thinking animated by science and mathematics, and emerged better and bolder than before. A modern phoenix rose from the ashes, but only after much argument, slow, scientific assessment of needs, meticulous measurement of plots, mapping of terrain, and proof of ownership. It was something we don’t see much of today – urban planning.

High on the list was air pollution, trade and transport (the port and the Thames), aesthetics, and fire prevention (fire breaks and no more timbered buildings). There was to be no building until the survey was completed. They were going to get it right.

Within six years they had an imperfect but functioning city. St Paul’s took four decades more, but from the 17th century, money and business, not religion, was to be England’s direction of travel. So the Royal Exchange was placed at the heart of the new City, where it remains today, flanked by the Bank of England and the Mansion House, symbols of finance capitalism and oppression.