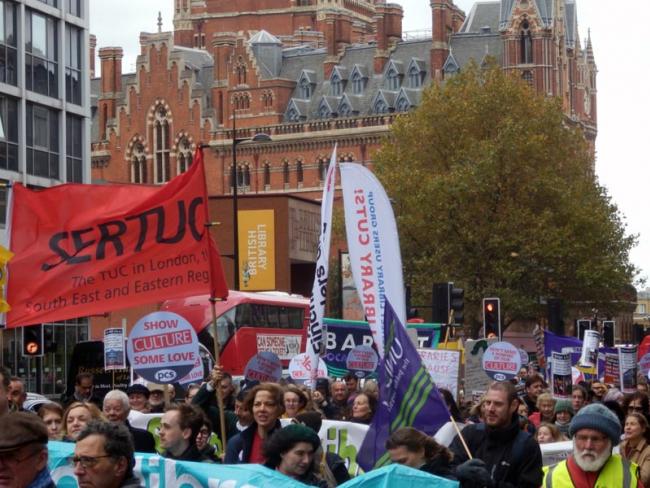 Demonstrators set off from the British Library, London. Photo Workers.

Some 3,000 public library workers, users and authors marched on 5 November from the British Library, London, to Trafalgar Square. Since then the government announced a £4 million package of support for public libraries, named the Opportunities for Everyone Fund. But libraries have to bid for the funding and demonstrate that they are “innovative and efficient”, and councils are being forced down the route of hiving their library services off to trusts and mutuals.

To put the £4 million in context,  a few days later CIPFA, the Chartered Institute of Public Finance and Accountancy, reported that spending by libraries had fallen by £25 million and 67 libraries had closed in the financial year ending in April 2016. Since 2010, 478 libraries have closed across England, Scotland and Wales.

In the latest local cuts, Swindon is to close 10 out of its 15 libraries, Nottingham and Sheffield are both selling off their central libraries to property developers, and Scottish Borders is implementing redundancies, while Suffolk, the poster-boy for library mutuals faces a cut of 34 per cent.