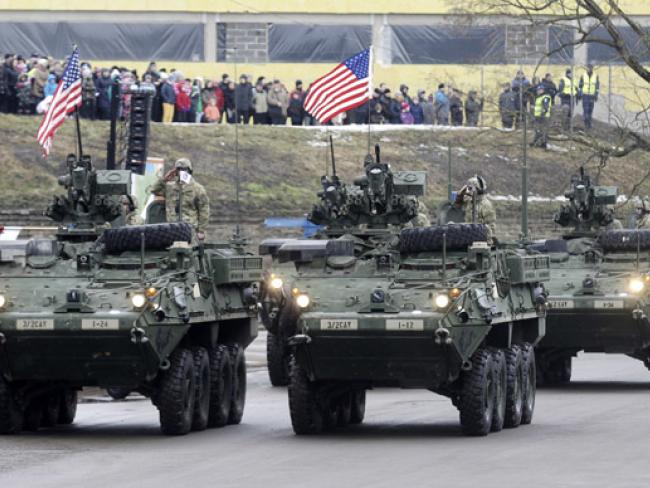 The free movement of weaponry: US armoured personnel carriers taking part in a military parade in Estonia, February 2015.

The massive 10-day Anaconda-2016 “war games” involve 24 countries including NATO members and ludicrously-named “Partnership for Peace” former Soviet states such as Ukraine. The 31,000 troops include 14,000 US, 12,000 Polish and 800 British soldiers.

German tanks will cross Poland from west to east for the first time since the Nazis marched in on the way to invade the Soviet Union on 22 June 1941. It marks the biggest movement of allied foreign troops in Poland in peace time.

“What the alliance needs is the equivalent of a military Schengen Zone.”

Two other training exercises – Saber Strike 16 (in Estonia, Latvia and Lithuania) and Swift Response (in Poland and Germany) – are taking place in the region, and will join the party. A large-scale amphibious exercise called Baltops is already taking place in the Baltic Sea, involving 17 countries and 6,000 troops.

All this activity is leading up to a NATO summit in Warsaw in July, which is likely to approve increases in troops stationed in eastern Europe.

NATO is building two huge missile “defence” systems in northern Poland and Romania, part of a “defence umbrella” which Washington is planning from Greenland to the Azores. The US is planning to quadruple military spending in Europe next year.

The dangers are clear. A European embassy defence attaché described a nightmare scenario where there could be “a mishap, a miscalculation which the Russians construe, or choose to construe, as an offensive action”. Imagine if this were Russia staging similar “war games” with South American countries on the US border!

Since Poland’s Law and Justice party came to power in October last year, there have been widespread forced retirements and sackings among the army top brass. Now a 17-brigade territorial army is planned, which will include right-wing extremists in gun clubs and paramilitary groups.

The volunteers have been described by a government minister as “a fifth force after land, sea, air and special forces”. Two such brigades are to take part in Anaconda.

The Obama administration’s aim is clear – to promote the effective collapse of Russia by surrounding it economically, politically and militarily, using the EU and NATO and whatever other resources to hand.

This is the real context for Obama’s appeal to Britain to stay in the EU. Already, the US has generously lent nuclear weapons to Belgium, Germany, Italy and even Turkey in a programme of “nuclear sharing”.

So much for the “peace-loving” EU. The EU is NATO’s soft power, hard cop, soft cop. EU treaties oblige us to “contribute to the vitality of a renewed Atlantic alliance”.

Amid renewed talk of a Brussels-run EU army, an interview by Sky News on June 8 with Commander of US forces in Europe Lt Gen Ben Hodges exposed NATO plans for the EU – free movement of NATO troops and weapons across national borders.

“What the alliance needs is the equivalent of a military Schengen Zone that would allow . . . for us to be able to move around,” he said.