Next steps on the road to independence 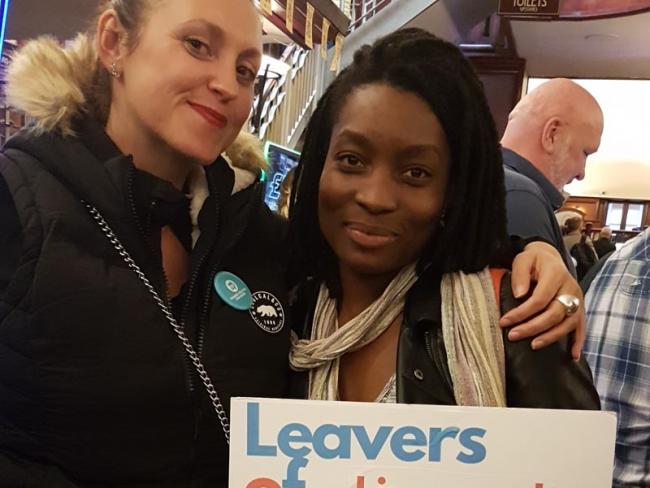 Liverpool leavers preparting to march for democracy on the Manchester Peterloo anniversary demonstration, held on Saturday 19 October as MPs in Westminster were once again perverting democracy. Photo Workers.

The establishment wants to sabotage Brexit completely. Even if it happens, they will try anything to lock us back into the EU’s rules and regulations. So where do we start? This would be a good step: throw the MPs out of Parliament and lock the doors.

Here’s a history lesson for those ultra-sensitive MPs who get so upset by straightforward language in Parliament. It’s 20 April 1653. Cromwell is berating the Long Parliament (which had sat since 1640).

“It is high time for me to put an end to your sitting in this place, which you have dishonoured by your contempt of all virtue, and defiled by your practice of all vice; ye are a factious crew, and enemies to all good government; ye are a pack of mercenary wretches and would, like Esau, sell your country for a mess of pottage, and like Judas betray your God for a few pieces of silver.

“Is there a man amongst you that has the least care for the good of the Commonwealth?

“Ye sordid prostitutes have you not defil’d this sacred place. . . Ye are grown intolerably odious to the whole nation. . .  So, take away that shining bauble and lock up the doors.

What have MPs in this long parliament done to earn the respect they demand from the people? It seemed to start well when Parliament voted by a huge majority to call a Referendum and the Cameron government promised to implement its decision. Then in February 2017 MPs voted to trigger Article 50 by the very large majority of 384, setting withdrawal at 29 March 2019 whether or not we had a Withdrawal Agreement in place.

Then they set about denying democracy. Parliament failed to allow us to leave on 29 March 2019 and May had to ask the EU for an extension, granted until 31 October 2019.

Boris Johnson was elected to leadership of the Tory party by a large majority on a platform of Brexit by 31 October 2019, deal or no deal. All hell broke loose. Johnson had to be destroyed!

A squalid court case led to the Supreme Court’s blatant overthrowing of the High Court decision that it is wrong for a court to interfere in political decisions. Unanimous. The Supreme Court thus morphed into a political court, a mirror of the European Court of Justice. And the Commons passed the shameful Benn Act, surrendering the government’s room to negotiate with the EU.

Since the 2017 election, 1 in 10 MPs have changed party affiliation (some more than once) denying their constituents representation by the party they voted for, and its 2017 election manifesto. Lib Dems say “Bollocks to Brexit”, defy the people’s decision and revoke Article 50.

There is now no pretence of honour among MPs. As Geoffrey Cox, the attorney general, said in a magnificent Cromwellian speech on 25 September: “This parliament is a disgrace! It has no moral right to sit on these green benches”, calling it too cowardly to face the electorate.

The reality is that Parliament has set its face against the people. So now it’s time for the people to respond in kind, by setting our face against Parliament. The people alone are sovereign, and have expressed their will in the biggest democratic vote in our history.

What will change with a general election? There will be one, in spite of the blockers who fear the wrath of the electorate.

The CPBML has never believed in the probity and honesty of Parliament in upholding democracy. Representing the people comes down to “Vote for us every five years, then we ignore you and do what we want.”

But when threatened by a foreign power the situation changes, so clearly we must use every tool at hand to gain our freedom, including a general election. The people must find a way to insist on Brexit. Brexiteers are even now preparing this work, analysing constituency by constituency, candidate by candidate – to work out the best way to use your vote. Each candidate must know we will hold them to account.

Will any politician get us out? And after an election, whatever happens, then what? This parliament is dead. But the next one? Will we forgive and forget the shambles, the plots, the treachery, and allow this to happen again? Will we, as we have so often done, sit back and put our trust in politicians to do what we demand? Never again!

Only we the people can force Britain out of the EU, and we’ll have to deal with Parliament, for there will be lots more problems to tackle.

When we finally leave the EU, there will be even more difficult times. The EU and the transnational corporations that are its masters won’t give up, and will continue to work against our independence after we’ve left.

We’ll have to face that. But we’ll have gained our freedom from the EU, and be able to tackle our problems ourselves, in our own country, with our own people.

Let’s change our thinking, abandon any trust in politicians. Keep the true people’s voice alive, resounding. We must apply more and more pressure. Leavers’ groups around the country are going out to leaflet, talk to people, point out the truth of what the EU really means.

Let’s be specific. We have seen headlines highlighting the “Ghost towns of Latvia” – the emptying out of countries through freedom of movement. We know there is an EU foreign policy and army developing, and a new era of integration, with “eurodistricts” cutting across borders and denying democratically elected governments.

We see how the EU operates, how the Commission is chosen, and how the EU elite chose Ursula von der Leyen. We see how the EU parliament operates – it can’t introduce, amend or repeal legislation, and MEPs are allowed by European judges to hide their expenses.

The EU is in decline. In 1973 when we joined, 38 per cent of the world economy was in the EU, now it is 16 per cent. The prediction is that 90 per cent will be outside of it in 30 years’ time. Leaving will be joining the growing part of the world economy. We won’t have to join the euro or bail it out of the predicted crash. We can save £1 billion a month, the cost of a further extension. We can regain our fishing grounds.

Instead of relying on skilled labour from the EU, we will have once again to train and upskill workers, with jobs made available here rather than being advertised first abroad. The scandal of stealing doctors and nurses from EU countries, while failing to train our own, can be stopped. Without the reserve army of labour from EU countries, wages can be improved – indeed, with the decrease in economic migrants from the EU, they are already improving. The future is bright for the young.

Leaving is the beginning of taking control. It won’t come all at once but it means we will be able to enforce our will and vision for what we want our country to be, and it will mean a real stake in government.

According to the current polls, 80 per cent of voters, both leave and remain, put Brexit as their number 1 priority. So we have to deal with it before we can deal with other issues. Whatever happens this week, this month, or next year, it won’t go away.

The Labour Party leadership avoids the number 1 issue, instead producing a ridiculous shopping list. Most of the list is not allowed within the EU, for instance renationalisation of the railways.

There was large opposition to the EU-US free trade deal TTIP. So why do so many seem to think we need a free trade deal with the EU? We can trade freely without free trade deals. We can decide for the first time in over 40 years what we need to produce and make and what we want to buy.

We can determine our own rules on animal welfare – banning live exports. We can opt for locally produced food, and we can deal with pollution – cities, roads, air, water.

We can decide for ourselves how to improve our country. There will be lots of disagreements and lively debate. We need planning in each sector by those who work in it. Read the analysis from Fishing for Leave for clarity about how to organise fishing once out of the EU.

Take up the challenge: Do you want to live in an independent country or not?

Let’s make every effort to enforce our will to achieve the freedom we demand.

• This article is and edited and shortened version of a speech given at a CPBML public meeting in London on 14th October.