No trade deal for EU and Canada 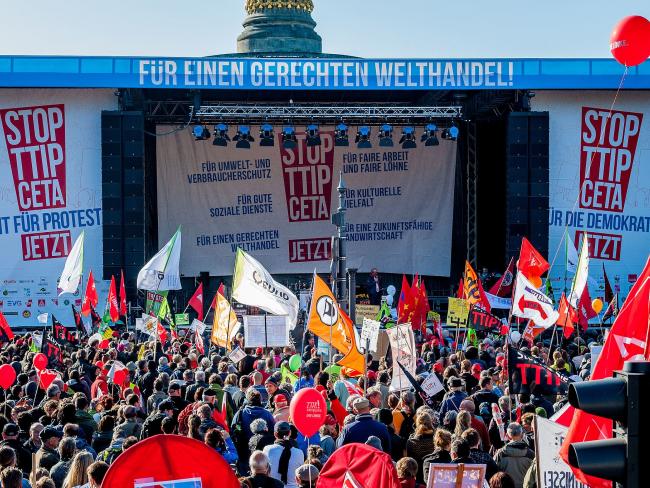 Belgium cannot sign the Comprehensive Economic and Trade Agreement (CETA), the EU’s proposed trade deal with Canada. That’s because of opposition from three of Belgium’s elected bodies. And if their position is sustained, it will block the whole deal.

The parliament of Wallonia (the French-speaking region of Belgium), the Brussels city parliament and the parliament of the wider French-speaking community all want stronger safeguards for workers, legal protections for farmers, and higher environmental and consumer standards. They point out that CETA gives too much power to multinational corporations, even allowing them to sue governments.

‘CETA gives too much power to multinational corporations.’

The other 27 EU governments want to sign the agreement, which has been in the pipeline for seven years. But the Belgians are not alone; there have been protests across Europe during the course of CETA negotiations. In many people’s minds CETA is linked to TTIP, the proposed deal between the EU and USA with similar terms.

Some claim that regional governments in Belgium could block any EU deal with Britain in the same way. The agreement under Article 50 could be reached without needing ratification by all the individual member states, because it would be agreed by qualified majority voting.

But any deal on our future trade relationship with the EU would indeed need to be approved by all the individual member states. In the case of Belgium, that would mean any of the local parliaments could scupper it.

This failure shows just how bad the EU is at reaching any agreement. More importantly, we in Britain should not be talking about negotiations to take back control – that is a contradiction in terms.