Skip to main content
Home » News/Views » No to the war machine!

No to the war machine! 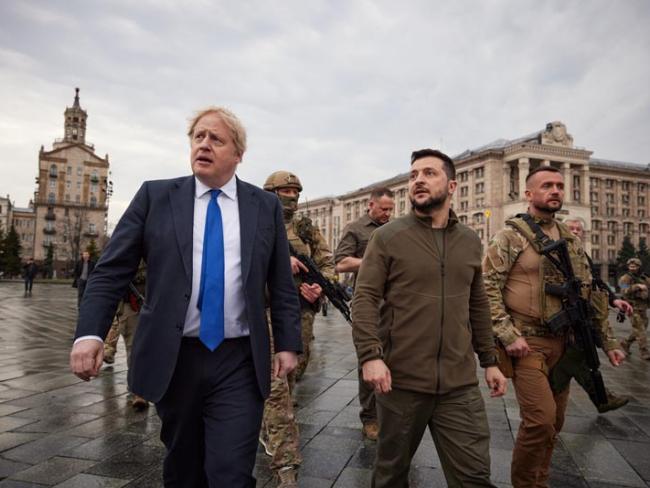 Boris Johnson walking in Kyiv with Ukrainian president Volodymyr Zelensky, April 2022. A road in a Ukrainian town has been renamed in Johnson’s honour, but he’s not such a hero here. Photo Ukrainian government (CC BY-NC-ND 2.0).

Our current prime minister doesn’t know if he’ll still be in office by the end of the summer. But he does claim to know that the war in Ukraine will drag on for years. Parroting the prediction of NATO secretary general Jens Stoltenberg, Boris Johnson told the Sunday Times on 19 June we must “steel ourselves for a long war”.

How come? Is it just wishful thinking on his part, or is he testing the water to see where the opposition might lie? Or more to the point, is Johnson saying it will be a long war because he plans to do all he can to make sure it will last for years and years?

He doubtless thinks that just as the Falklands War saved Margaret Thatcher’s government 40 years ago, his flailing administration will be rescued by blood in Ukraine.

Johnson coupled his warning with a promise to deliver yet more “weapons, equipment ammunition and training” to Ukraine. He clearly reckons that a long drawn-out war will be good business for British and multinational armaments companies and the military establishment as a whole.

His call was swiftly followed by a “battle cry” from the new chief of the general staff, General Sir Patrick Sanders, in a memo that revelled in the reinforcement which war gives the British Army’s mission of “being ready to fight and win wars on land”.

All this will cost billions, and realistically there’s only one place that kind of money will come from: the pockets of the working class. And this at a time when incomes are being squeezed on all sides.

Already we hear warnings from ministers about the dire consequence of workers trying to keep up with inflation. That would create an “inflationary cycle”, said Treasury secretary Simon Clarke. Never mind that the real inflationary cycle is being created by the war in Ukraine, leading to huge increases in the price of fuel and food.

Workers in Britain have no option but to fight for a pay rise, even though some are still keeping their heads in the sand. What is less acknowledged is that we must also fight to get Britain out of NATO – an aggressive, expensive and dangerous alliance which could drag the whole country into war, with Johnson leading the charge.

When the British people voted to leave the European Union they not only took a giant step towards real independence, they also deprived the EU of the skill and cunning of the British ruling class. The EU has been rudderless ever since.

Taking Britain out of NATO would have the same effect on that military alliance, removing the strategic and tactical nous built up by British imperialism over centuries (see feature article, page 6). Leaving NATO would not only save a fortune and make Britain a safer place, it would also be a huge contribution to world peace.

A truly independent Britain, with armed forces designed for defence rather than aggression, would have no need of it anyway.

Britain - the brains behind NATO
Labour's lethal legacy
Why Britain should leave NATO
British military aid floods into Ukraine
Britain out of NATO!