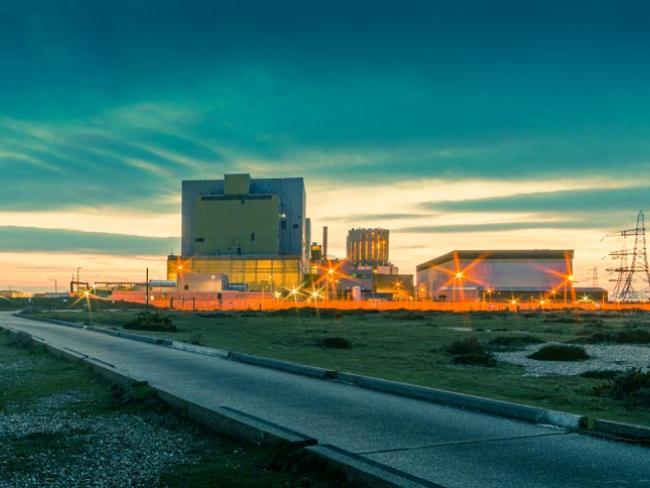 EDF’s Dungeness B nuclear station, photographed at dusk in March 2018, the year it went offline. It is due to come back into operation in August this year. Photo SJMPhotos/shutterstock.com.

If Britain is to be self-reliant in energy nuclear is going to have to be part of the mix. – The alternative is either reliance on unstable governments and blocs or a radical reduction in industry and living standards…

With so much doubt surrounding the future of energy supply in Britain, it is worth noting that Hinkley Point C power station in Somerset has passed a further milestone in construction, with the final concrete pours of the six cooling water tunnel heads, ahead of schedule. These innovative structures cap the intake and outfall tunnels now being bored offshore.

The next stage in the operation involves transporting the heads into the Bristol Channel, to be lifted in place onto the vertical shafts which will form the cooling water system.

This is a challenging engineering operation, in a tidal range of 13 metres, the second highest in the world. The heads are huge – the biggest weighs in at 4,650 tonnes. It will take the two largest crane vessels in the world, Gulliver and Rambiz, working in tandem to lift each head.

Many questioned the deal the government struck with the French EDF company to build this power station, not least the guaranteed prices once energy starts to be generated, effectively making British taxpayers subsidise a French state-controlled company to the tune of £29.7 billion.

But the deal has been done. And as Hinkley Point C nears completion, it represents the sole concrete indicator that the government will continue to regard nuclear as a major component of our energy mix.

Most of the rest of Britain’s remaining nuclear stations are approaching the end of their life, and some big decisions need to be made. The government is in a cleft stick of its own muddled convictions. It celebrates being free of the EU’s internal energy market, but continues to hope that “the market will provide” (wherever that market may be).

Well, if we can subsidise a French company, why can’t we subsidise a British company? We need to press for a commitment to self-reliance in energy, with new nuclear facilities as the jewel in the crown.

Nuclear, after all, is the safest form of large scale, reliable energy that a modern economy could have, both in terms of fewest deaths caused by accidents, and lowest carbon footprint.

Alarmists point to previous accidents, Three Mile Island, Chernobyl and Fukushima, which have become causes célèbres for those opposed to nuclear power. But loss of life, such as it was, arose from bungling, cost cutting and lack of forward planning, rather than any inherent and uncontrollable risk.

There is risk, as with everything in life. The issue is, how big a risk, how can it be managed? Panic is no answer. Such a response would have banned Atlantic shipping after the Titanic sank.

As an illustration of how risk aversity can lead to misplaced fear, local press reporting on Hinkley is instructive. Somerset council has published its safety plans for the power station, including advice to the local population in the event of an incident that might lead to an unplanned release. Wales Online led its article on the plans with “People across Cardiff would be told to stop consuming vegetables, milk and water…”.

The chances of such an incident are remote, but prudent safety precautions make for a considered response if required. Also raised in this account was anxiety about the planned disposal of dredged sediment from Hinkley A and Hinkley B, even though a report from Natural Resources Wales clearly acknowledged that testing of sediment samples had found radioactive levels so low as not to require further investigation – “from radiological conclusions, there is no objection to this material being dumped”, it concluded..

To compound government hesitancy, it looks for every opportunity to parade its “green” credentials by repeatedly deferring to a largely unscientific but vociferous environmental activist lobby.

‘In place of real jobs, the elusive prospect of “green jobs” is once again dangled...’

Take the recent volte-face over the proposed new coal mine near Whitehaven. Originally approved by Cumbria council last October and given the green light by communities secretary Robert Jenrick, the project would produce 2.7 million tonnes of coking coal a year and generate 500 full-time skilled jobs.

Cue the predictable response from Friends of the Earth, Greenpeace and others that the mine would paint Britain’s attitude to its climate responsibilities in a negative light, particularly when hosting a UN climate change summit later this year.

With all the ducks beginning to line up, the government’s own Committee on Climate Change (CCC) pitched in, persuading Jenrick to reverse his decision and order a public enquiry. And to cap it all and prove that the government is “on message”, business secretary Kwasi Kwarteng weighed in on Radio 4’s Today programme on 17 March, announcing that there were “very compelling reasons” not to open the mine.

And yet coking coal is for steel making rather than electricity generation. Up to 85 per cent of the output is scheduled for export, and coking coal is readily available anyway on the open market. In other words, it’s fine to burn the stuff so long as someone else digs it. Since most coking coal is mined in North America and Australia, that means a great deal of costly, not to say polluting, transportation just to placate mining opponents here.

The pandemic has exposed the risks associated with long and “just in time” supply chains. It would be myopic in the extreme not to see the benefits of local production and consumption in this case.

Meanwhile, the people of Cumbria, who very much welcomed the opening of the new pit, face further uncertainty. With some parts of the county among the poorest in England, and devastation from flooding in recent years, the proposed opening of the mine (the first in this country for 30 years) offered real jobs, and with them a sense of optimism for the future.

But in place of real jobs, the elusive prospect of “green” jobs is once again dangled. Environmental doom-sayers are having a field day.

Enter Cumbria Action for Sustainability, a charity which campaigns for a carbon free Cumbria. According to a report it commissioned, more than 9,000 green jobs could be created in Cumbria, largely through a quadrupling of renewable energy and improvements in the energy efficiency of buildings over the next 15 years.

Worthy aspirations, but haven’t we heard this all before? Only last month the government scrapped its Green Homes Grant Scheme for improved home insulation, conceding that only 10 per cent of its target of 600 homes had been reached. The coalition government had a similar scheme, but of the 26 million homes due to benefit, only 15,000 accepted the offer.

Professor Ian Watson, an influential environmental expert, unwittingly exposed the contradiction at the heart of this green utopia myth. Fulminating against the government’s initial acceptance of the decision to allow the mine to go ahead, he claimed this was in contradiction to its commitment to address climate change.

In fact government actions at that point matched its words perfectly. If we are to make steel, it requires coking coal, and the least polluting way to get it is to mine our own.

People undoubtedly aspire to cleaner air and a less polluted atmosphere, but they will not be fobbed off with meaningless jargon. Investment in a burgeoning nuclear industry, coupled with a resolve to deploy locally available resources when there is an economic case for doing so, is our best bet if we are serious about a sustainable and improving Britain.

Many of the ideas in this article were inspired by a recent CPBML online public discussion on Britain’s energy security. If you’d like to take part in future discussions, look out for notices in our e-newsletter (see notice on right-hadside of all web pages at cpbml.org.uk, or email info@cpbml.org.uk.