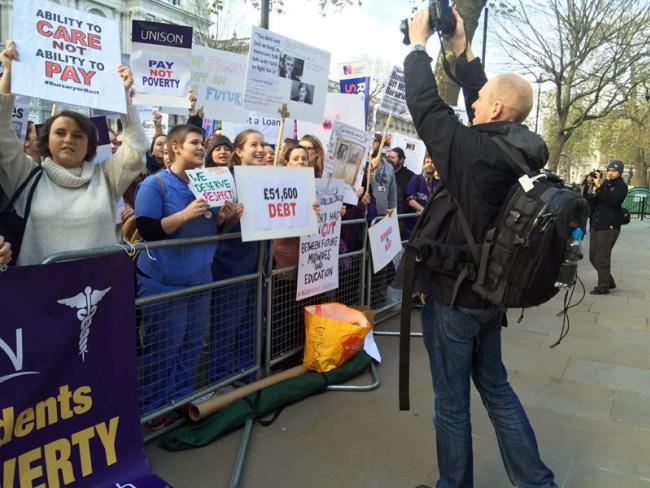 Nursing and midwifery students in Whitehall protesting against the axing of bursaries, December 2015. Photo Workers.

We hear a lot about nursing shortages and how the answer lies in importing “the brightest and the best” from elsewhere in the world.  But given that the International Council of Nurses reports a worldwide shortage of nurses, the suggested policy is grossly unethical.

The answer is simple and the solution straightforward. But government after government has preferred to cut corners and save a little money –  and waste a good deal of money in the process too.

Most UK nursing courses do recruit the number of students they can manage. The big problem is that one in four student nurses drops out before completing their three-year programme.

The main reason for this, said Katerina Kolyva, the executive director of the Council of Deans for UK universities, speaking this month, is “the lack of national funding to support the living costs of student nurses”.

That’s some irony. The Council of Deans was the body which agreed to Chancellor George Osborne’s proposal to cut student bursaries, which came into effect in 2016. Just three years later, it called for the introduction of a maintenance grant for nursing students.

The universities were quick to go along with the Osborne proposals as they were seduced by the offer of increasing student places. Yet student places in nursing and medicine can never be expanded beyond the number of clinical placements available – so this hoped-for expansion was always illusory.

In addition, the attack on the bursary adversely affected those coming forward to apply for nursing. The charity The Health Foundation reviewed the policy and concluded, “the change in funding arrangements in England, combined with a dip in the population of 18-year-olds, has resulted in a fall in the number of nursing students, rather than the expected rise.”

So, the first step in increasing the number of nursing students who complete the programme is to pay their living costs. There will always be some attrition from nursing courses: not all will find they can cope with the role and not all will make the academic grade. But there would be several thousand more registered nurses every year if the current drop out rate of one in four could be reduced to one in ten.

Another step is needed: to increase the pay of registered nurses and reduce the number who leave the profession prematurely. According to the Health Foundation, “Between 2010/11 and 2020/21 the pay of NHS staff will have declined in real terms (i.e. adjusted for inflation) by at least 12%.”

Most of Britain’s major hospitals are in city centres, and most nurses can only afford to live on the outskirts – so they work 12-hour shifts, and travel for a couple more. Not surprisingly, many find this unsustainable. Again, a small percentage reduction in the number of registered staff leaving the profession prematurely would increase staffing numbers by thousands.

Let’s get the real reasons for why there are nursing shortages being discussed. Most importantly the nursing profession itself must make its voice heard to demand these home-grown solutions.