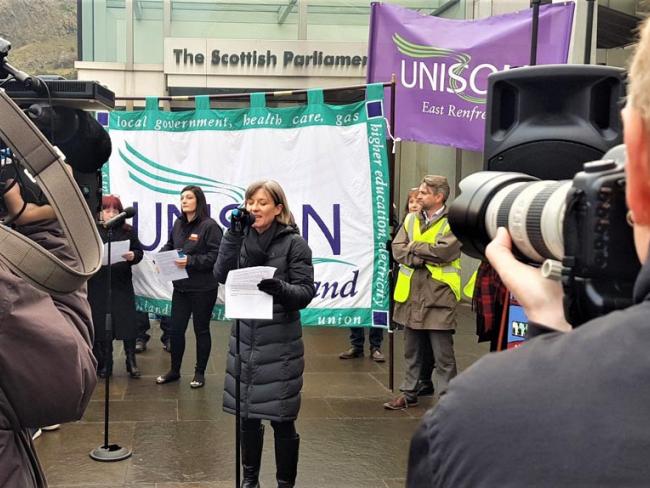 Members of several unions gathered at the Scottish Parliament on 12 December to protest against that day’s annual budget announcement from the minority SNP administration. Workers from Unite, GMB, EIS, Unison, UCU and Prospect heard speakers highlighting the failure of this budget to invest properly in public services and education.

Mary Senior of UCU said that her union is balloting for strike action. She explained this came about because of the impoverishment in education and proposed job cuts of 10 per cent at Edinburgh's Queen Margaret University. The vote is open until 16 January.

Senior said “across the university sector we are seeing cuts to courses, to jobs, whilst workloads are spiralling and casual contracts are becoming commonplace.” She continued “It is deeply disappointing that today's real term cuts to the sector's funding will ultimately hit students the hardest. If we value our universities and the teaching knowledge exchange and research they provide, then we need a funding settlement to match the politicians’ warm words. We have not seen that today.”

GMB, Unison and Unite represent local government workers. They warned of widespread industrial action in the wake of their members’ rejection of the 3 per cent pay increase proposed by the Convention of Scottish Local Authorities. Mike Kirby of Unison pointed out that public sector pay rose by just 4.4 per cent between 2010 and 2016 while the cost of living rose by 22 per cent over that period. The current offer fails to make any inroads to those massive cuts in earnings.