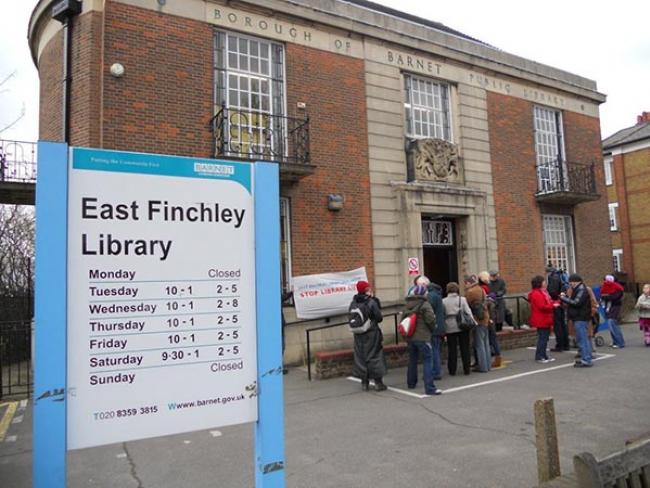 Local campaigners outside East Finchley library in 2011 when they successfully fought off an attempt to close this particular branch library. Even then low staffing meant it was not open at lunchtime, a logical visiting time for many.

Local residents have vowed to fight cuts to what was once one of London’s leading public library services. The London Borough of Barnet, looking to cut £2.85 million from the service’s budget of £4.8 million, considered options at the end of October that included making all but four of its 15 libraries into unstaffed reading rooms, with reductions in floor space of up to 93 per cent; handing them over to volunteer groups; or outsourcing and its close and fashionable cousin, turning them over to a mutual.

There have been many library cuts and closures in recent years. The authoritative website, Public Libraries News, calculates that 491 public libraries of the 4,265 in the country have been closed or passed over to volunteers since April 2013. The Barnet cuts, instigated in a council that includes what was Thatcher’s constituency of Finchley, stand out among this dismal tally by their savagery and severity.

Barnet was once a model service. Modern British children’s librarianship was pioneered in Hendon Library, the central library of the Barnet system, by Eileen Colwell. Many new, state-of-the-art library buildings were commissioned by the newly formed borough after London local government reorganisation in the 1960s. Its reference and music collections were leading examples of the richness a well-resourced public library system can offer to its public.

The guts had already been torn out of the service in 2012; then the number of professionally qualified librarians in the borough was cut from 24.5 to 6, and those six remaining librarians were removed from public service duties. At the same time, in an act of utterly senseless vandalism, the council closed its highly successful museum, Church Farm House. This 17th century listed building has been left to rot.

In theory the Public Libraries and Museums Act 1964 requires local authorities to run a comprehensive service. In practice, the act is universally flouted. The custodian of the act, the junior minister Ed Vaizey, has stood by and done nothing as libraries around the country, to the extent that the professional body for librarians, CILIP, passed a motion of no confidence in him at their 2013 Annual General Meeting.

'Trade unions and a Save Barnet Libraries group have pledged to fight these cuts.'

It is good news that trade unions and a Save Barnet Libraries group have pledged to fight these cuts; it will not be easy. Having allowed professional jobs in the service to be butchered, trade union organisation needs to be rebuilt by those remaining.  The example of Friern Barnet library, handed over to volunteers, may be attractive to some, and this is now one of the official “options” on the council consultation! The council would like nothing better than for volunteers to come forward to take libraries off their hands. It knows full well that the volunteers cannot offer a modern professional service, and cannot sustain the effort required.

It is a good sign that at the first public meeting in relation to one of the threatened libraries, the East Finchley Library (see picture), over 80 members of the public attended and rejected the “volunteer model” and pledged to fight for a library led by professionals.

Another positive sign was the amount of young people attending the meeting with the most impassioned contribution from the floor coming from a 16-year-old who had used the library as a study space for her GCSE studies. A lot of young people in the area have to share bedrooms with siblings and rely on the library for evening and especially weekend study. This local library is also well utilised by local schools who bring whole classes to borrow books and many young parents are involved in the fight.

The level of thought and debate in this first public meeting needs to be maintained. It was pointed out that the council have put libraries in the same department as children’s social services with the aim of trying to portray those fighting for the library as “depriving children of much needed services” when the library is clearly a provider of  a much needed community resources for all ages – especially children.