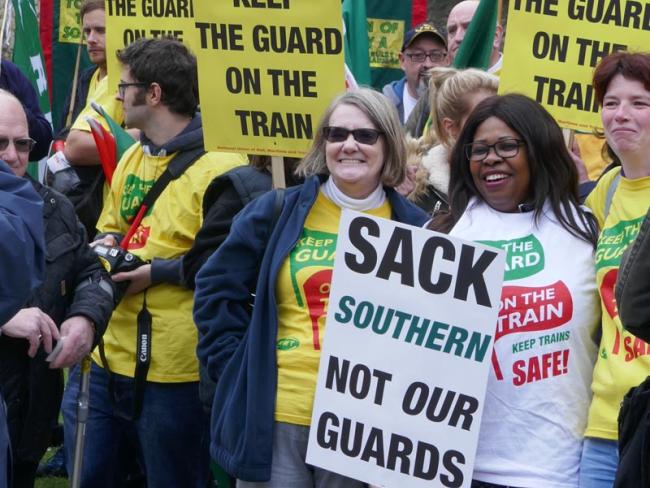 Aslef train drivers employed by Southern have rejected a settlement of their dispute over the extension of driver controlled operation (DCO) of trains. This mode of operation requires only a driver to be on board a passenger train but no safety-trained guard. Out of 953 members balloted, 317 voted to accept the deal, but 374 voted to reject it.

Aslef officials had reached the rejected deal with Southern, part of Govia Thameslink Railway (GTR), on 2 February after 11 days of intensive negotiations. These talks were brokered by the TUC.

The RMT, the union which represents GTR guards standing to lose their jobs, was excluded from those talks – and strongly condemned the deal. It accused Aslef of leaving its members high and dry, and GTR of denying it access to discussions about a group of staff for which it has negotiating rights alongside Aslef. It also condemned the TUC for its role in excluding the RMT.

Shortly after concluding the deal, Simon Weller, Aslef assistant general secretary, tellingly stated that “…it is now clear that there are some serious misunderstandings about this deal.” He went on to say that the union had achieved a second safety-critical person on every train, but then set out exceptions to this.

Most drivers clearly felt the employer would abuse the deal. This reflects the complete lack of trust that workers at all levels of the company have after what has been nearly a year of bitterly confrontational industrial relations.

GTR top brass had expected a different outcome. They arrogantly boasted to shareholders only hours before the result was known that DCO would soon be rolled out right across their network. One senior manager insulted the intelligence of the drivers stating that they should have done as they were told by Aslef national officials.

The RMT had announced further strike action by its guard members shortly before the Aslef ballot result, an outcome the RMT must have warmly greeted after such a protracted period of struggle. RMT general secretary Mick Cash followed the announcement of the ballot result by writing to the TUC general secretary Frances O’Grady demanding that the TUC reconvene talks with GTR, this time with RMT participation.

The RMT has now announced ballots of its guard members in both Merseyrail and Arriva Rail North where guards also face the introduction of DCO operation of trains.

In Merseyrail, the dispute was precipitated after the Merseyside combined authority said it was buying trains from Swiss train builder Stadler. The new trains are designed to be operated without a guard.

Arriva Rail North has refused to give the RMT a guarantee that a second person would be on all passenger services to retain full responsibility for train despatch, passenger safety as they board and alight, dealing with evacuation in any emergency, and protection of the train. So the union announced another dispute and ballot. The results will be announced on 28 February, along with those from the Merseyrail ballot.

The RMT is also watching developments in Northern Rail. The new franchise (ultimately owned by Deutsche Bahn, the German state railway) is committed to move to DCO on some routes.

RMT is fighting these disputes partly because it realises that the rapidly accelerating and systematic abolition of the role of the guard will result in thousands of jobs being lost. Guards represent a powerful group within the union, which have had the ability to stop the trains.

Signallers are another powerful group in the union that are now facing extinction. New technology is resulting in the closure of signal boxes all over the network. The loss of both these groups of members would seriously weaken the RMT.

But the main reason for action by the RMT, as well as Aslef, is the squeeze put on the railways’ finances by a government that is deliberately encouraging passenger train operators to undermine the current high safety standards. This is something that passengers should be and indeed are very concerned about.

The Merseyside combined authority was quite open that it would prefer to have guards on the new trains, but couldn’t afford them because of government cuts to its income. The RMT has rightly accused the authority of putting money before safety.

‘The battle for safety and jobs is well and truly on.’

The Office of Rail and Road (ORR), the rail industry’s safety enforcer, said: “ORR’s view is that with suitable equipment, procedures and competent staff in place the proposed form of train dispatch intended by GTR-Southern meets legal requirements for safe operation.” In other words, the extension of DCO may be just about safe enough – and therefore legal! Both Aslef and the RMT have been critical of the equipment put in place to facilitate DCO, particularly the cameras on the most modern trains that are now being introduced.

Rail workers have recently been prosecuted in high-profile cases after safety incidents. In one instance the individual was exonerated by Merseyrail and ORR but was still prosecuted by British Transport Police! Drivers and guards are keen to ensure they do not face prison sentences in the future on being held responsible for deaths and injuries arising because systems and equipment are not fit for purpose. This has strongly influenced their view about whether or not to resist DCO.

It has also influenced the views of the managers that the rail companies are hoping to fashion into an army of strike breakers. Many managers are concerned about standing in for guards with a minimum of training, with the prospect of facing a judge and jury if anything goes wrong. They are also unenthusiastic about doing so in the face of picket lines and a future in which they will be expected to continue to manage guards. Some at least are refusing to do so, and their union, TSSA, has previously made it clear that it will support manager members who refuse to scab on colleagues.

The RMT has also pointed out that in the absence of a second person on the train, passengers with mobility difficulties will find it hard to get on and off trains safely or at all, as some wheelchair users have found out recently in GTR.

The union has pointed to a number of recent serious incidents where the guard played a crucial role in evacuating passengers and protecting the train. It has also highlighted incidents that probably would not have occurred had there been a guard on the train.

Advocates of DCO point out that many trains in Britain already operate without a guard. It may take a serious train crash and many deaths on a DCO train before the position of the unions is vindicated.

Many passengers and commuter organisations associated with GTR have seen through the lies and spin peddled by the company and the government over the issues around DCO. Passengers travelling on GTR know from experience that even when the RMT and Aslef have not been taking industrial action, the company has run an appalling service. Trains are often cancelled, terminated early, or run with fewer coaches owing to mismanagement. Many passengers have joined the unions in calling for the government to remove GTR from the franchise, and many of those are supporting a return of the trains to public ownership.

The battle for safety and jobs is well and truly on. GTR drivers in Aslef have shown that they believe their private bosses are cutting costs at the expense of safety, and that the company can’t be trusted. RMT guards across Britain are fighting for their futures.

They can be encouraged by victories already achieved. The RMT forced Scotrail to back down and keep guards in Scotland. The RMT and TSSA recently took strike action over safety concerns after London Underground closed ticket offices and cut so many staff that safety was seriously compromised. The settlement of that dispute has resulted in hundreds of station jobs being reinstated.