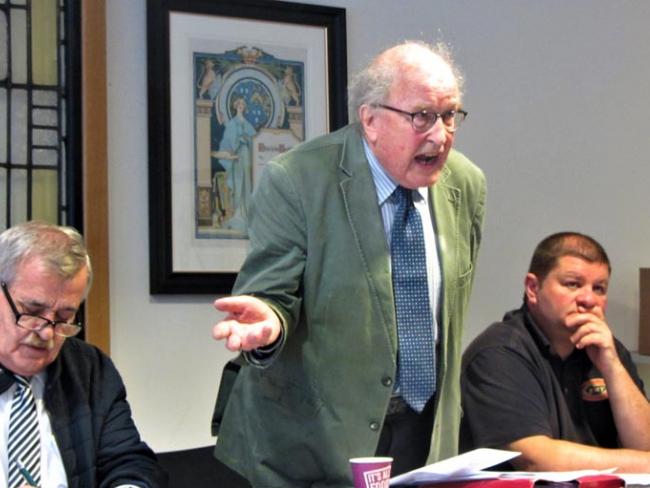 The Unite HQ in Glasgow was the setting for a trade union meeting last weekend (Saturday) involving current and former officials of the RMT union and others that heard from Anthony Coughlan, a veteran of decades of struggle against the EU in Ireland as the recent book in his honour testifies (A Festschrift for Anthony Coughlan: Iontas Press).

Coughlan played a major role in the campaigns against the EU Nice Treaty in 2001 and The Lisbon Treaty in 2008. But as he pointed out, “Dublin’s career federalists responded by making people vote a second time on these treaties to reverse the No result.” Director of the National Platform EU Research and Information Centre Ireland, he is also Associate Professor Emeritus in Social Policy at Trinity College Dublin.

He was invited as guest speaker to the public meeting at the AGM of Radical Options, which campaigns for Brexit within the trade union movement in Scotland and has several trade unions and nine trade union councils affiliated to it.

Coughlan summed up his view from an Irish perspective: “Only since June have people in Ireland began to realise that the UK is actually going to leave the EU – and their main question is, ‘What will be the character of the long term-arrangement?’

“The fundamental fear of Ireland’s establishment is that when the UK leaves the EU, public opinion in the republic will start to shift towards Irexit [Ireland exiting the EU]. Such a shift is probable, for there are few advantages for Ireland these days in staying in the EU.

“Ireland has now become a net contributor to the EU, to the tune of a billion euros this year, and will be expected to pay more when the UK leaves." Coughlan described Sinn Fein as being “up a gumtree’ having missed the opportunity to support the leavers in the north and facilitate Ireland's independence from the EU.

Coughlan saw the main issue in the current election in Britain as being “whether the British state can gain control of its laws, money and borders from the supranational EU”. Looking to the future he saw that “out of the single market and the customs union, new opportunities will open up”.

The RMT’s Scottish Organiser, Gordon Martin, urged that “we must start having confidence in ourselves – we must start fighting and organising to win; simply hoping for a Brexit we like doesn’t cut it.” He attacked the myth that the EU was a protector of workers’ rights, pointing out that the EU never intervened once since we joined in 1973 to stop any of what are some of the most restrictive anti-trade union laws in the world, with trade union membership and collective bargaining being adversely affected by EU public procurement laws.

Martin also reminded the audience of the RMT’s campaigning against Dutch state-owned Abellio, which runs railways in Scotland, and against the EU plans for further privatisation of the rail industry throughout Europe.

Rail is a key issue in Ireland, too. On 25 July, the European Commission sent what it called a “reasoned opinion” to Ireland instructing the country to open up its domestic rail network, which is still in state hands.

Dangers in the current Withdrawal Agreement were highlighted by speakers from the floor, such as prohibitions on state aid to industry.

* ROSE – Radical Options for Scotland & Europe – was formed in the summer of 2016 as a Labour Movement campaign to defend and advance the rights of working people in Scotland in the negotiations following the EU referendum. It seeks to bring together both those in the Labour Movement who voted to Remain and those who supported Leave to defend the rights we have and to maximise the opportunities that exist to advance workers’ rights outside the EU.