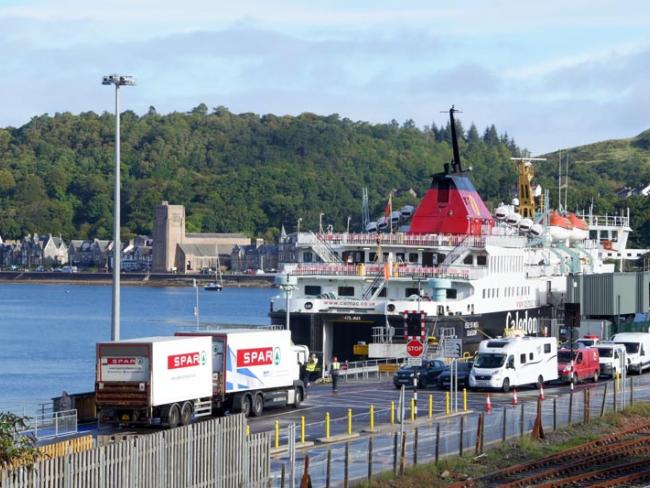 One of Scotland’s “lifeline” ferries loading at Oban. Now the SNP has outsourced two new ferries for the Islay route to a Turkish yard. Photo Workers.

Recent polling has confirmed that most voters in Scotland continue to oppose the breakup of Britain. That hasn’t deterred Nicola Sturgeon and her coalition allies…

Scotland is making its view clear. Two major polling initiatives at the end of March were remarkably similar in their results, showing that opinion was holding firm against separatist plans to break Scotland away from Britain and to hold a referendum on the issue next year.

One poll, conducted by BMG Research for the Herald newspaper between 25 and 31 March, found that 53 per cent did not want Scotland to leave, with 47 per cent saying they did.

Another poll carried out by YouGov on behalf of the These Islands forum between 29 and 31 March also found a 53 to 47 per cent split in favour of rejecting Scottish breakaway.

And the numbers wanting to leave diminished further when the question was put another way. Asked “Should Scotland remain inside or leave the UK?”, 59 per cent opted for staying while 41 per cent chose leave. As for a second independence referendum being held next year, only 36 per cent supported that.

Despite the Scottish National Party (SNP) facing a persistent lack of majority support for their cause ever since losing the 2014 referendum, First Minister Nicola Sturgeon has firmly set out plans for a new referendum by the end of 2023 with the aim of full independence by 2026.

To strong criticism, the civil service in Scotland was widely used to draw up plans and blueprints for a breakaway during the campaign leading up to the 2014 referendum. A similar process has been happening over recent months.

Pamela Nash, chief executive of Scotland in Union, pointed out, “Nicola Sturgeon and her ministers are increasingly out of touch with the people of Scotland. Amid a cost-of-living crisis and pressure on local public services, the last thing the government should be focused on is how to divide Scotland once again. Taking up civil service time and resources like this is irresponsible and inappropriate.”

As things stand, the British government seems committed to turning down any request from the SNP-led administration in Edinburgh for the necessary legal powers to hold a meaningful referendum. Sturgeon, however, says that if such requests are vetoed, a Bill for a referendum would be presented in Scotland. That would leave the British government no option but to challenge that legislation in the courts.

Economic facts boost the case for the Union. There are consistent benefits from UK-wide pooling of resources – estimated by the government at £36 billion for the 2020-21 tax year. The SNP’s pro-capitalist and pro-austerity Sustainable Growth Commission proposals were shelved without replacement. Questions abound on the negative impact of creating a customs border with England, the false dream of rejoining the EU, the challenge of creating a new currency and the economic shock of trying to unpick Britain’s thoroughly integrated machinery of state.

Indeed subversive efforts to attempt to split Britain’s Financial Conduct Authority, dividing the Edinburgh office off from the London centre, are being resisted by staff. On top of that, research into Britain-wide information, such as the Census, as well as economic data, has been hampered by a decade of splitting up information streams, leaving researchers hobbled by the lack of comparable data.

The Health Foundation has pointed out that it has become impossible to compare health outcomes generally across England, Scotland, Wales and Northern Ireland because Scotland has changed the way it collected the data since devolution.

The Foundation has, though, launched an independent inquiry this year into health outcomes in Scotland because on one measure – life expectancy at birth – Scotland clearly trails the rest of Britain, and indeed most of western Europe.

Instead of the SNP’s fake “independence” within the EU, workers across Britain would be better occupied paying attention to another aspect of independence for the whole country: independent energy supply.

In recent years the influence of the net-zero obsessed World Bank, Conservative Environmental Network and World Economic Forum has pushed the British government into discouraging exploration and investment in oil and gas, both on land and sea. It became beholden to the European Union’s Green Deal Policy.

Britain could meet only a third of its future needs if it fails to invest in new oil and gas extraction. Between January and March 2021 we had to import 56 per cent of the gas needed.

Cambo is one of at least a dozen possible oil and gas fields located in the Corona Ridge Area of Britain’s continental shelf. And in February approval was given by the UK Oil and Gas Authority for the Abigail oil and gas field in the central North Sea off the coast of Peterhead.

‘To be an independent maritime nation Britain must protect its shipbuilding.…’

All of this development has been rejected by the Scottish Greens and the SNP. Sturgeon symbolically demolished the iconic Longannet coal-fired power station last December, pressing the button that ignited 700kg of explosives. No new nuclear power stations are to be built in Scotland and all coal mines are abandoned. Fracking is prohibited.

The Cambo oil and gas field – and its possible 1,000 jobs – was ditched after Sturgeon said last November that she opposed any development of new oil and gas fields in the North Sea. The Scottish Greens took credit for her change of heart.

For years she and Alex Salmond had been promoting the SNP mantra “It’s Scotland’s Oil”. What she had attempted was putting a stop to energy production, and halting that would have adversely affected the whole of Britain, not just Scotland.

For years, too, the SNP and Scottish Greens have trumpeted a coming jobs boom in renewable energy. What it has got is a damp squib. 130,000 workers would be employed in the low carbon economy, it was claimed, but by 2020 only about 20,500 jobs had been created.

The development has been complicated by the European Union starting legal action in March this year through the World Trade Organization. The EU claims that subsidies for green energy projects, including wind farms off the British coast, discriminate against imported energy. Crown Estate Scotland pointed to more hurdles that ScotWind licensing applicants needed to clear before work could start on windfarm construction. These include planning permission and adequate financing.

The GMB trade union also warned that much of the fabrication work could go overseas. NOV, a company involved in developing three big floating wind farms, is negotiating with Dubai-based Lamprell Plc to provide fabrication, assembly and outfitting for Cerulean Winds’ three 1GW floating windfarms off the west of Shetland and the central North Sea.

GMB organiser Gary Cook said, “…instead of securing the vital skills and tens of thousands of jobs for UK workers, Ministers at Westminster and Holyrood have been asleep at the wheel.”

To be an independent maritime nation Britain must protect its shipbuilding. Nowhere has been more iconic as a shipbuilding area than Clydeside, now celebrating the 50th anniversary of the Upper Clyde Shipbuilders’ work-in.

It is tragic to see the unfolding saga of failure to build the ferries essential to link the mainland with the many west coast islands. The initial cost of the ships was £97 million, but after several setbacks the final cost is heading to over £250 million.

It is galling to learn that the two new ferries on the Islay route are to be built by Cemre Marin Endustri in Turkey. The shortlist included yards in Poland and Romania, but no British yard.

This shows the weakness of leaving these matters in the hands of the pro-EU Scottish separatists. The strength of being part of a united Britain is shown by the benefits of having a UK National Shipbuilding Strategy (updated just this March). It must now be implemented.