SNP opts for division as workers unite in action 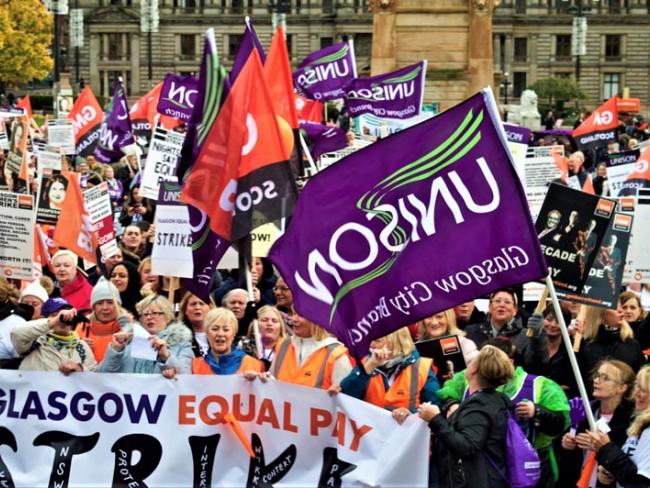 In Scotland as in the rest of Britain, workers are in the midst of campaigns and actions against the cost of living crisis, falling value of wages and deteriorating conditions of work. The last thing that’s needed is a divisive and spurious referendum that may well foster argument and splits among workmates and families.

But that’s precisely what First Minister Nicola Sturgeon called for on 14 June with the first of a planned series of papers on the issue.

Just a few examples of united actions include Aslef leading the way with their settlement with ScotRail, Unison launching its strike ballot of 25,000 waste and cleansing workers and school staff, ongoing action on the railways by RMT and TSSA members, and Unite supporting the strike by fishery protection workers at Marine Scotland over pay cuts.

Unite general secretary Sharon Graham commented: “The Scottish government has to come back to us with a more realistic offer at talks next week or strike action is inevitable in the coming weeks. Unite has zero hesitation in defending our members’ jobs, term and conditions at all times.”

And the CWU Scotland regional secretary hit out at planned job cuts by the Scottish government, whose current  Spending Review sets out “plans to cut between 17,000 and 40,000 public sector jobs over the next three years, with local councils again set to bear the brunt of the cuts”.

A tremendous example was set during the two-year campaign in the 2014 referendum by the six trade unions that made a stand against separatism. That important contribution – by Aslef, Community, CWU, GMB, NUM and Usdaw – should not be forgotten. They should rekindle their opposition to breaking up the British working class, and encourage other trade unions to join them.

Now is the time to prepare resolutions and motions in support of unity to the various annual conferences of the trade unions. Given that the month of the proposed referendum is October 2023, time to act is at a premium. Some unions – like those of teaching staff and the Musicians’ Union – sat on the fence.

In a unifying rallying call, the Scottish Trade Union Congress – in partnership with The Poverty Alliance – organised a Cost of Living Summit for trade unionists on 17 June in Glasgow, bringing together over 40 trade unions and civic organisations. In conclusion the assembly declared “a cost of living emergency”.

The STUC general secretary, Roz Foyer, referring to the SNP-Scottish Green alliance in Edinburgh, said “Their recent spending review plans to foist harmful cuts on our public services is utterly incompatible with the response needed to help those impacted by this crisis.”

She added: “The pandemic has exposed the deep-rooted inequalities across Scotland, exacerbated by a cost-of-living crisis not of workers’ choice nor making. We cannot – and will not – be held responsible for the negligence of our political class in their failure to tackle rising inflation coupled with falling wages.”

But circumstances are very different to the days when the former prime minister David Cameron meekly rolled over and accommodated the SNP’s designs for the 2014 referendum. Now it is unlikely that the British government will grant the required Section 30 powers to Holyrood to hold such a vote.

A referendum under these circumstances would have no legal force. So care should be taken by advocates of British unity of giving a wildcat (and possibly illegal) referendum legitimacy.

Some would argue that the best policy would be to boycott such a vote. Nevertheless, strong arguments against separatist actions and ideas have to be made. And what better way than to be positive about the benefits and potential of an increasingly united Britain.

It is unlikely that there would be an over-arching campaigning organisation this time like Better Together in 2014, but there are pressure groups such as Scotland in Union (SIU). And SIU has started its fightback positively.

SIU’s statement opened with “Scotland’s positive future is as part of the UK, bringing together people and communities, keeping the pound, avoiding a hard border between friends and families, investing more in our NHS and schools, and creating more jobs.”

The consequences of a separatist outcome would be dire, but relentless listing of negatives is not the best way to counter its arguments. We need to hear more from the rest of Britain about why they would oppose the breaking up their country and the benefits of staying united.

It is not just Scotland that would be worse off out of Britain, and there is so much to be gained from settling this unnecessary dispute and building an indestructible unity within Britain.

From today’s vantage point, nothing could be more backward-looking than a return to control by the European Union. But that’s what Nicola Sturgeon’s so-called “independence” for Scotland would mean. She seemed to suggest getting into the EU’s single market sooner than full membership, which would entail years of harsh austerity.

And setting out her plans for a referendum Sturgeon implied the need for a hard border between her vision of EU member Scotland and non-EU England: “If we are in the single market and the rest of the UK is outside the single market then, yes, there are issues in terms of regulatory and customs requirements that need to be met.”

Leaving the EU was a decision of Britain as a whole, the Scots having voted decisively in 2014 to stay part of Britain. Her bid for an October 2023 referendum is only the start of a series of pronouncements.

Titled “Building a New Scotland”, the bid would set out the details of trade with the rest of Britain, prospective EU membership, a new currency, a central bank and strategic relationships. On top of all of that a Referendum Bill has yet to be presented.

Most of the first document released at her press conference on 14 June was devoted to a wish list of desirable European countries that she could aspire to, virtually saying “look what we could be like” (ignoring the EU austerity visited upon countries like Portugal, Cyprus and Greece).

Her rosy view belies the fact that during the 14 years of SNP rule (7 years of Salmond, 7 years of Sturgeon) much has deteriorated in Scotland – mainly in areas in which the SNP have direct responsibility. These areas include the NHS, education, industry, ferry procurement, growing drug and alcohol addiction and local council cuts.

Sturgeon’s document attacks the UK for having low expenditure on research and development while failing to point out that this is a responsibility that has been devolved to Scotland for years.

Scotland’s estimated deficit (the difference between taxes raised and spending) more than doubled last year to 22.4 per cent of its GDP. This is about double that of any other countries in Europe. The limit needed to achieve EU membership is 3 per cent! Nowhere is this major problem addressed.

Meanwhile, millions of pounds are being spent on building up a chain of Scottish representative offices around the world, notably in Brussels, Beijing, Ottawa, Berlin and Washington DC. These amount to being unofficial “embassies”, and through them the SNP/Scottish Green alliance is running what amounts to an independent foreign policy.

Pamela Nash of Scotland in Union pointed out: “Overseas business networks are crucial in promoting our world-class exports, even though the rest of the UK will always be by far our most important market. There should be a joined-up global engagement strategy with the UK government, rather than the SNP government working in opposition on this important area.”