Socialism and finance: lessons from the Soviet Union about securing real progress 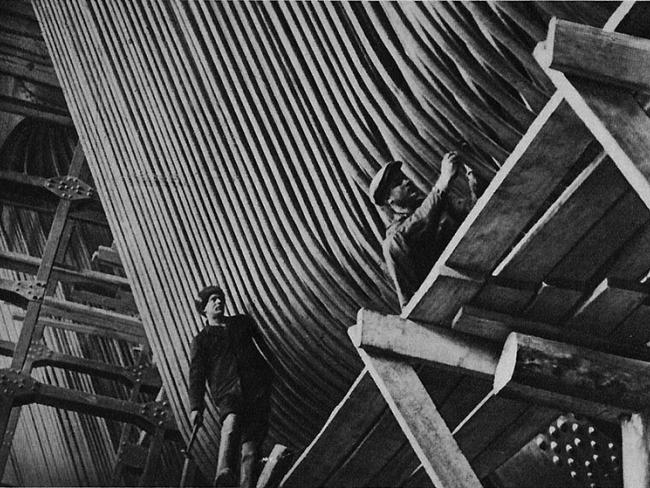 Assembling a pumping plant at Magnitostroi – Russia thrived while the West slumped.

The inadequacy of terms such as austerity or economic downturn is becoming obvious to more and more British workers. In fact Britain is in an economic slump that has similarities with the slump of the 1930s. But this time at its core is a private sector banking mess.

What works, and what doesn’t work? During the 1930s what didn’t work was capitalist finance – just like now it had painted itself into a corner. What certainly did work during this period was the industrial and financial structure that had been developed in the Soviet Union.

Soviet industrial achievement up to the Second World War has been well documented, but often with little or no mention of banking, credit and the role that financial techniques played in helping to bring about this Soviet success. This is curious because it was not just through industry but also through finance that the Marxist political economy was tested at a time of complete paralysis in capitalist circles.

The origins of this Marxist leap forwards can be traced back to 1911, when the Bolsheviks started to ask some hard questions of themselves concerning their understanding of money and currency. For example, they recognised that to talk about the regularisation of economic life under Socialism and to evade the question of finance, means either to betray complete ignorance or to fool the “simple folk” with high-sounding words. They also recognised that taking responsibility was key and should be accompanied by humility, knowing that it is a complicated measure and that none of them was an expert.

But by 1916 the rewards of rigorous study were emerging, with the publication of Lenin’s Imperialism, The Highest Stage of Capitalism. Three features were identified in this ground-breaking study: first, that the slogan “United States of Europe” was counter revolutionary; second, that there is an iron law under capitalism whereby the uneven economic development of countries is guaranteed; and third, that arising from point 2 it is possible for revolution to occur in one country.

‘Revolution followed by civil war had taken place and ten invading capitalist armies had been beaten.’

By 1922 things for the Bolsheviks had moved on. The First World War had ended in 1918, revolution followed by civil war had taken place and ten invading capitalist armies had been beaten and removed from Soviet territory. The Bolsheviks then had to address what they called the “swing to the left” that began to gather momentum from 1922 to 1934. This leftist thinking sought to exploit a number of misconceptions: that money loses its importance after a revolution, that money would be quickly abolished, that credit is an anomaly, and that finance is not supposed to exist in a socialist society.

To address these falsehoods an understanding of the behaviour and characteristics of money and banking under socialism was considered to be key. Central to this Bolshevik thinking was the notion that the economic weapons of the bourgeoisie should be used by the working class with a view to overcoming capitalism: not only can you have industry without capitalism but you can also have money and banking without capitalism. “Use industry against capitalism. Use money against capitalism” was the Bolshevik political shorthand of the day.

A sound currency and banking structure was considered a key part of “the dual nature of trade under the present conditions of the struggle between socialistic elements and capitalistic elements”, as Stalin put it in 1925. This had been ill understood in certain quarters, with a stepping up of leftist reaction following the introduction of the New Economic Policy (NEP) in 1922. Indeed the success of the NEP, the achievement by 1927 of getting production back to the levels of 1913, the success of the Central Bank (Gosbank) in monetary policy and the introduction in 1927 of the first 5-year plan did not deter the leftist attack. In 1931 they were claiming that it was now necessary to proceed with the organisation of direct exchange of products, and that money would soon be abolished.

Clearly this matter now had to be dealt with, and it was (see ‘Sickly aristocrats’ below).

It was during 1931 to 1934 that the monetarist struggle was won by the Bolsheviks. At which point the international capitalists realised that they had lost in the Soviet Union. For the first time ever in a country the political economy of the capitalist class had been successfully changed into the political economy of the working class. Of course the Bolsheviks noted that it was not by coincidence that the Nazi Party in Germany, with their promise of attacking the Soviet Union, suddenly found that their coffers were being flooded by donations from firms such as Siemens, Krupp and Rheinmetall (see Workers, March 2012). But what of the German Communist Party, which had 4.8 million voters in 1933? The paucity of their thinking was summed up by the following acknowledgement that appeared in the June 1934 journal of the German Social Democrats, by now in exile.

“Faced with the despair of proletarians reduced to joblessness, of young people with diplomas and no future, of the middle classes of merchants and artisans condemned to bankruptcy, and of farmers terribly threatened by the collapse in agricultural prices, we all failed. We weren’t capable of offering the masses anything but speeches about the glory of socialism.”

What the 1930s reveal is that when tested by the touchstone of reality, practical organisation furnished a much more severe test on Marxism than would be supplied by theory or logic in isolation. At a time of worldwide capitalist slump throughout the decade the Soviet Union came through with flying colours.

It is not so much a matter of looking at what went wrong in the Soviet Union post 1953 but first looking closely at what went right between 1917 and 1953. And for today’s naysayers in our trade unions who seek to portray the Bolsheviks in a negative light, here are two possible clues as to why things went wrong eventually.

Firstly, as Stalin commented in 1945, the tragic loss of 20 million lives in repelling the Nazi invasion could not really be expressed by a statistic; in reality the loss was incalculable. Secondly, in 1958 consumer instalment credit was introduced in the Soviet Union. Specialised credit agencies granted loans to individuals to improve homes charging 2 to 3 per cent over a ten-year period. The loans grew rapidly in popularity. Could easy credit be a route back to capitalism? It has certainly been a prop for capitalism in our time.

Irrespective of the condition of Russia today, we can see what a bold step British capitalism took from 1979 to 2008 in making credit easily available to British workers at amounts unprecedented.

By creating the illusion that living standards could be maintained through queuing for credit rather than fighting for wages, the effects of the policy of industrial destruction pursued by successive governments were cushioned. The reality is now for all to see and it is for the British working class to decide whether to take a bold step in response.

“To begin with, among some Communists an extremely supercilious attitude towards trade in general, towards Soviet trade in particular still prevails. These Communists (excuse the expression) regard Soviet trade as something of secondary importance, something which is hardly worthwhile, and the people engaged in trade as people done for. These people obviously do not understand that by their snobbish attitude towards trade they do not express Bolshevik views but the views of sickly aristocrats with big ambitions deprived of ammunition...

“...They do not understand that money is an instrument of bourgeois economy which the Soviet Government has taken into its hands and adapted to the interests of socialism in order to give full vent to the development of Soviet trade and thereby prepare the conditions for direct exchange of products. They do not understand that direct exchange can come only to supplant, and as a result of an ideally organised system of trade, something which we are far from having and which we shall not have so very soon.” (Extracts from Stalin’s report in 1934 to the XVII Party Congress.)