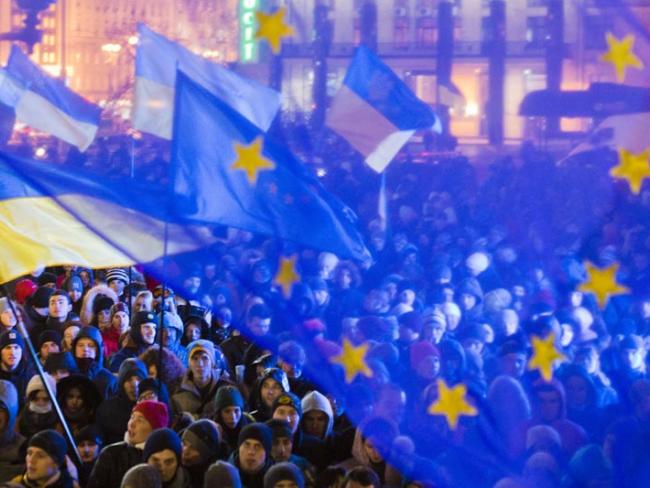 It only takes a quick look at its history to confirm that the EU was not born as a peace project. The first step towards the EU was the 1951 European Coal and Steel Community when NATO wanted to rearm Germany against the Soviet Union.

From the start, NATO and EU expansion went hand-in-hand, which meanta partnership between the military push and the economic push.” The EU protocol on structured cooperation says a more ”assertive” EU role in security and defence will “contribute to the vitality of a renewed Atlantic alliance”.

The European Economic Community (EEC) was born in the time of European states’ colonial wars against nations struggling for independence, in the middle of France’s vicious war in Algeria (viewed as French territory). The EEC endorsed this war.

Fast forward to 1991. After the downfall of the Soviet Union, Yugoslavia, unlike the other Eastern European countries, refused to allow NATO forces to be based in the country, and refused to apply to join the EEC. This defiance could not be permitted, so NATO aimed to break Yugoslavia apart. The EEC declared that the borders between Yugoslavia’s six republics were international borders and said that the majority people in each republic, not the Yugoslav people as a whole, had the right to self-determination.

When the Yugoslav government deployed its army to hold the country together, the EEC called this “illegal”. When Yugoslavia was still united, the EEC announced that all the Yugoslav republics were “sovereign and independent with international identity”. The EEC cancelled its trade agreement, ending most of Yugoslavia’s foreign trade.

Germany recognised Croatia, so did the EEC, so did Thatcher. A civil war broke out between those trying to keep the country united and those trying to break it up. NATO attacked, to ensure it was broken up.

Next on the NATO/EU agenda was Iraq. The EU and its leading members backed the illegal attack on Iraq and delivered an ultimatum demanding Iraq’s “unconditional cooperation”, opening the way to war.

Next was Libya. It was the national governments of EU members Britain and France that attacked the country in 2011, wrecked it, and gave it over to feuding Islamist extremists who murdered its leader. The next year, amid a storm of controversy,  the EU was awarded the Nobel Peace Prize!

Now the EU is funding Islamist militias in Libya and a new slave trade is flourishing there.

Herman van Rompuy, then president of the EU Council, told us that Euroscepticism leads to war. Really? So euroscepticism caused the war on Libya, not the pro-EU governments of Britain and France? No. It is capitalism – in this case under the aegis of the European Union – that causes war, not euroscepticism.

Next the EU and the USA engineered the splitting of Ukraine. NATO assured Russia that it would not invite Ukraine to join NATO. Then President Bush tried to fast-track Ukraine into NATO and the EU offered it security “cooperation”.

The EU offered an agreement to Ukraine which we were told was just economic and “civilisational”, but it excluded Russia as a trading partner and included “military and security” terms binding Ukraine to NATO. The Agreement called for Ukraine’s “ever-deeper involvement in the European security area”.

In February 2014 the US government and the EU carried out what George Friedman, Head of Stratfor, or “the Private CIA”, called “the most blatant coup in history” – the overthrow of Ukraine’s President Viktor Yanukovych.

In 2015 Ukraine’s government, Russia and the Donbass region all signed the Minsk peace treaty, to re-integrate Donbass into Ukraine. But on 18 January this year Ukraine’s parliament said it wanted to take Donbass back by force, if necessary. Ukraine’s government also committed itself to conquering the Crimea, which had voted in March 2014 by more than nine to one to rejoin Russia.

So the EU ignited a proxy war with Russia in Europe – which never happened even in all the years of the Cold War. We are told that the EU is so internationalist, that it promotes peace. Really? Splitting countries – Yugoslavia and Ukraine? Backing a fascist coup in Ukraine?

The EU is a an organised force to export wars, to unite for wars against poor countries in Eastern Europe, West Asia and Africa. The bigger and the more centralised it has become, the more it has thrown its weight about.

Now, we are told, we face a threat from Russia. The Pentagon warned us, “Moscow seeks to promote a multi-polar world predicated on the principles of respect for state sovereignty and non-interference in other states’ internal affairs, the primacy of the United Nations …. To support these great power ambitions …” Since when is promoting respect for sovereignty, non-interference and the United Nations, proof of great power ambitions?

Since 1991 700,000 square miles of what was the Soviet Union have come under western control. The EU has gained more than 400,000 of these square miles. The other 300,000 are largely in Ukraine. So who is being expansionist?

The notorious FBI/CIA report on alleged Russian election interference admitted: “Judgments are not intended to imply that we have proof that shows something to be a fact.” [sic]  Even The New York Times noted: “What is missing from the public report is what many Americans most eagerly anticipated: hard evidence to back up the agencies’ claims that the Russian government engineered the election attack.”

We are also told that we face a threat from North Korea. Yet it was Trump who threatened - at the United Nations, of all places – “to totally destroy North Korea …” No wonder North Korea has sought, and now says it has, a nuclear deterrent.

In December South Korean and US forces conducted a mock invasion of North Korea, under Lieutenant General Thomas Vandal – yes, that’s his name.

The EU has been imposing sanctions on North Korea since 2006, causing food shortages. In December the UN Security Council unanimously voted for more sanctions to cut 90 per cent of North Korea’s oil supplies and get 150,000 North Koreans expelled from other countries. Prime Minister May has just promised to carry over all the EU sanctions against 36 countries including Cuba.

Born in colonial wars, the EU is still enmeshed in colonial wars. Between 2003 and 2013 the EU launched 32 “crisis management” missions. Most managed to make the crises worse. Seven were in former Yugoslavia, 16 in Africa, 2 in Palestine, and one each in Ukraine, Afghanistan, Iraq and Indonesia. The EU has six ongoing military operations – Bosnia and Herzegovina since 2004 and five in Africa.

Turning now to the EU army that The Guardian told us was nothing more than the Leave side’s fantasy. In 2000, EU leaders from Britain, Germany, Italy and Poland called for a European army. Two years ago Jean-Claude Juncker said: “You would not create a European army to use it immediately. But a common army among the Europeans would convey to Russia that we are serious about defending the values of the European Union.” He wants the EU to be a “stronger global actor”.

Federica Mogherini, the head of the EU’s External Action Service, says that an EU army would be a “credible security provider worldwide” and “we are looking for possibilities to deploy one of our battle groups.”

Permanent Structured Cooperation - PESCO – is a giant step towards the EU taking control of military matters. Juncker tweeted, “She is awake, the Sleeping Beauty of the Lisbon Treaty: Permanent Structured Cooperation is happening. I welcome the operational steps taken today by Member States to lay the foundations of a European Defence Union. Our security cannot be outsourced.”

As part of the largest build-up of NATO forces in Eastern Europe for 30 years, the Baltic States, Poland, Romania and Bulgaria are hosting troops from across NATO’s 29 member states. British, French and Dutch forces are in Estonia. German troops lead the NATO forces in Lithuania.

The Baltic States spent US$ 900 million on the military in 2005. By next year they will be spending more than US$ 2 billion. Poland is also expanding its arms spending. Germany aims to increase its military spending to more than 35 billion euros by 2019. By 2020, it intends to spend 53 per cent more on military equipment than it did in 2016. It has pledged to increase its armed forces to 200,000.

The May government said it would not join PESCO, but Sir Stuart Peach, the Chief of Defence Staff, wants us to “keep the door open” to full membership. British defence companies, not wanting to miss out on new procurement opportunities, want us in.

This would require us to pay large sums to the EU and to obey Single Market rules in the sphere of defence. It would bind us into EU decision-making.

‘The government has confirmed it wants to take part in EU defence.’

At the recent UK-French summit, Prime Minister May backed President Macron’s proposal for a European Intervention Initiative. Macron wants to “go further” than PESCO. This too would tie us into the European Defence Union, undermining our national defence independence.

The government is taking part in a trial of the EU’s Coordinated Annual Review of Defence. This is a financial mechanism whereby the European Commission appraises our defence budget plans to integrate member nations’ militaries. Ministers have now indicated that we might stay in this and in EU Battlegroups (which place UK forces under EU Council policy control) and even play a “partial” or “project” role in PESCO. May said recently that we should be open to deploying our defence resources “with and indeed through EU mechanisms”.

Not even a vote

Since November 2016, the government has signed us up to all parts of the EU’s defence union except one, without any vote by MPs. These include finance, a command centre and a central budget. If we stay in them, or if any of them go into an exit treaty, as the government wants, we will not have left the European Union.

How do we stop the EU war machine? Time and again, the British people have shown they are increasingly for peace, while our so-called representatives vote for war – Afghanistan, Iraq, Libya. In 2013 Cameron planned to invade Syria. But when MPs asked their constituents for feedback they were besieged by emails “overwhelmingly opposed” to intervention. So foreign policy must be under democratic, working class control.

This article is an edited version of a speech delivered at a CPBML public meeting in London on 20 February.

The inexorable road to World War One
Why Britain should leave NATO
British military aid floods into Ukraine
1916: Lenin on imperialism
Economic war on workers being used to fund a military war