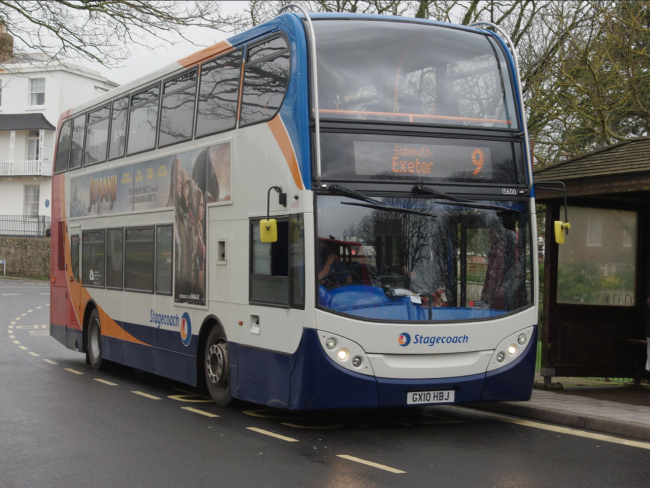 The RMT has suspended action on Stagecoach buses in the South West while members consider a revised offer made in last-ditch talks. A strike had been due to start today (18 October) as part of the fight for pay justice for bus workers. Details of the new offer are not public.

The union has warned that the failure to tackle poverty pay in the bus industry is brewing up a skills crisis which threatens the future of lifeline services across the South West.

The scandal of bus worker pay, where drivers earn less than £23,000 for taking responsibility for the safety of a packed vehicle and are left alone and vulnerable late at night, is sparking an exodus which will hit schoolchildren ‎and the poorest in our communities hard.

The union had also reacted angrily by attempts by Stagecoach managers to try and link any pay deal to cuts to existing staff benefits, meaning that a pay increase would only be awarded with savage reductions in sick pay and other basic working conditions.

Stagecoach said it has “left no stone unturned” in the pay negotiations. But in a statement released before the action was suspended, union RMT South West regional organiser Barry West hit back. “Instead of working with us to find a solution there is an agenda of ‘it’s our way or no way’, undermining our genuine attempt to support the company and resolve its constant haemorrhaging of staff for as many years as we can remember.

“This is not a new problem, and not because of Covid or Brexit but because there are better opportunities elsewhere and members are fed up with the way they are treated.

“I have never known strength of feeling like this.”

“In all my 34 years with the union I have never known strength of feeling like this – with 90 per cent voting in the ballot to go on strike in North Devon, Torbay and Exeter.”

West noted that bus staff suffered the effects of Covid-19. Two of the dead were working for Stagecoach Bus in Devon. And he accused the company of showing “a total lack of understanding” about the difficulties faced by members trying to pay bills and take care of sick and vulnerable loved ones.

“The savage cuts to sick pay for example would mean members who may have mental health issues suffering from a personal injury or a poor health would be required to have their sick pay cut to a level that might well push them over the edge at a time when they most need understanding support and compassion,” he said.

One reason for the dispute was a company decision to reduce sick pay to 60 per cent with 3 waiting days for 6 months, West said, with terminally ill staff receiving only £10 per hour until the exhaustion of company sick pay.

Mick Lynch, RMT general secretary, said: “When drivers and other staff, who are key transport professionals providing lifeline services, can earn more in supermarkets and fast-‎food joints it's no wonder they are voting with their feet in the current labour market.

“It’s well established now that we are facing a shortage of bus drivers across the South West as staff leave over poor pay and conditions. It is ridiculous that Stagecoach have chosen this moment to hammer their staff over pay.”

• This article is a revised version of an article published on Sunday 17 October. The revision reflects the suspension of the strike, announced later that day.