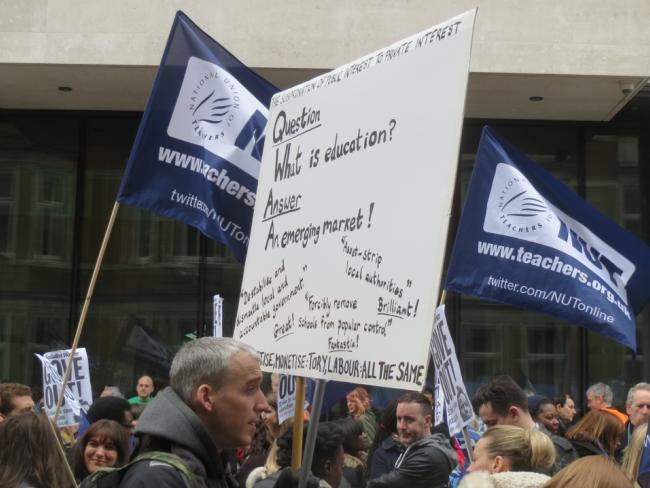 NUT demonsration in London March 2014 gets the message out. Photo Workers.

Nicky Morgan, education secretary in the new government, has tried to bolster the unwanted “Free Schools Movement”. Her stance should at least dispel the illusion in some union quarters that she is somehow more approachable and reasonable than her irascible predecessor.

In a speech two weeks after the election, Morgan made unsubstantiated claims about the demand for free schools and their effectiveness. She claimed that free schools are “providing a quality of schooling never before seen in many communities”. That was certainly untrue in Derby, where the Al-Madinah free school was so bad it had to withdraw from providing secondary education.

Currently there are just over 250 free schools. The government aims to add another 500 by 2020, which should provide an additional 270,000 school places. There is undoubtedly pressure on numbers, there’s a shortage of at least 60,000 primary places this year. But free schools will not provide the answer.

Existing free schools are not all in areas of shortage, and there’s no reason to believe it will be any different with new ones. By the end of 2013, more than half of free schools opened with spare places in the year groups that were inducted. A quarter of the schools were operating with at least four in ten places unfilled.

Parents are reluctant to entrust their children to the self-appointed promoters of these schools. This is hardly surprising when many free schools are promoted by religious zealots – a quarter of all applicants in Wave Four (for opening in September 2014).

This programme seems to be immune from austerity measures applied to public sector spending. Local authorities have been stripped of the right to build new schools and can only receive applications from academies and free schools. Yet the average capital cost of each free school is £6.6 million, plus up to an additional £1 million on “capacity building”.

If the outcome of the new plans follows the pattern of the earlier waves, this government will spend around £4 billion in five years. The free schools will continue to be unpopular, not least because they are allowed to run with unqualified staff.

Teaching unions point that planning is required to put school places where they are needed and to ensure that funds are well spent. That’s the antithesis of the government’s reliance on free schools and their promoters to fulfil the nation’s educational needs.

"It has been easy for Swedish free schools to make profits."

Challenged on her plans, Morgan could only bluster about the success of the Swedish model upon which this scheme is based. She denied that there were plans to enable promoters to take a profit from school budgets, presently illegal in England. But that’s precisely what the Swedish model allows. It has been easy for Swedish free schools to make profits. The result is that the number of promoters has rapidly reduced to a handful of chains that typically make profits of more than 8 per cent a year.

The claim from government and proposers alike is that free schools inevitably raise standards. The experience of the Swedish model runs counter to that claim. Michael Gove used to be keen to quote the Programme for International Student Assessment statistics to demonstrate how badly English children fared in international comparisons. The introduction of free schools has seen Swedish standards decline faster on such comparisons than any other school system between 2002 and 2012.

The only reasonable conclusion is that free schools, which we pay for, are not about standards. They are a tool to further fragment state education provision and open it up to profit-taking. That’s true whether the minster talks tough or a little sweeter.