Whatever happened to 'Take Control'? 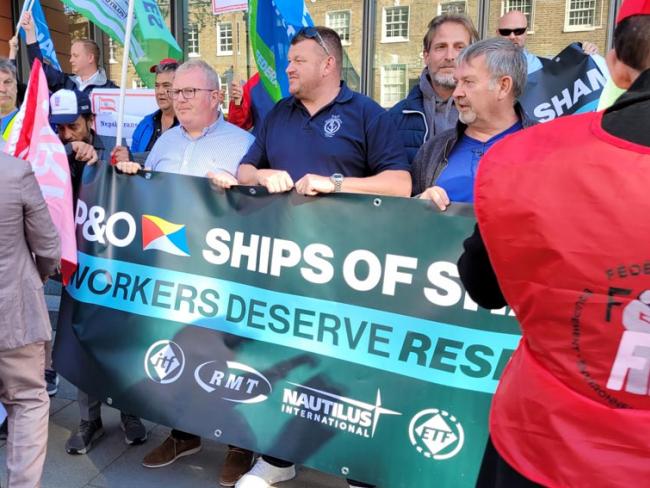 It’s been over a year since the transition period ended and Britain left the EU. But no sooner had control been wrested from the EU than the government set about outsourcing it to the market and the multinationals…

One of the landmark decisions of the European Court of Justice – a decision that revealed its institutional, constitutional subservience to transnational capital – was the Viking case.

Viking is a Finnish ferry company. In 2004, when Estonia joined the EU, it took advantage of the EU’s single market to sack all its workers and employ Estonian ones on cheaper wages.

The Court of Justice stood by Viking, along the way ruling that the right to strike did not apply if a strike against the “free movement” of capital and labour had a chance of succeeding.

That sad story was a major reason why leading trade union barrister John Hendy called the EU “a disaster for the collective rights of workers and their unions”.

It’s now 2022. But instead of control coming back to the people, it’s still in the hands of multinational capital – and we have the grotesque spectacle of the Viking scandal being re-enacted in Britain, with Dubai-owned P&O Ferries sacking its British staff to employ foreign workers.

The idea of taking control was the guiding spirit of the movement that won the referendum to take Britain out of the European Union. The idea was both powerful and clear: Britain should be free from the European single market, which imposes free movement of capital, goods and labour.

Britain has now left the European Union after a long struggle to implement the decision. But there’s no sign of the greater control that millions of people were waiting for. Quite the reverse – in area after area the government is handing control to the unregulated free market. Except in Northern Ireland, where it perversely continues with allowing the European Union to control what can be produced or imported.

Hardly a week passes without a new government scheme to make it easier for people to come to Britain to work. At the beginning of April, for example, Home Office figures revealed that City firms were sponsoring visa applications at the fastest rate since Britain left the EU.

An expert in employment law was quoted as saying, “I think the numbers will continue to rise. We’re only seeing the start of it. There’s a war for talent.”

The number of schemes encouraging firms to import skilled labour is unending. They include the Skilled Worker visa; the Global Talent visa; the Global Business Mobility visa (that one came into force on 11 April).

And at the end of May new rules come into operation making it even easier to come to Britain to work, with the introduction of the High Potential Individual visa.

A huge range of skilled workers are being lured into Britain, often from countries that can ill afford to lose them. The listed occupations run for pages and pages. But that’s not all: the government is also making it easier for employers sponsoring visa applications in shortage areas to pay the imported workers below the going rate for the industry.

The list of occupations where employers can get away with undercutting the going rate includes health managers and directors, residential and day care managers, engineers of just about every type, any biological scientists, IT business analysts, vets, actuaries and architects.

On top of this are the moves to relax rules on importing what the government describes as unskilled labour, in particular seasonal agricultural workers and HGV drivers. Last year, a temporary scheme for pork butchers was also introduced.

When Workers looked at the figures in November 2021, 4.9 million people with EU citizenship had been granted settled status to remain in Britain. By the end of February, that number had risen to nearly 5.3 million – extraordinary given that in May 2019 the government’s Independent Chief Inspector of Borders and Immigration reported confidently that there were an estimated 3.5 million EU citizens living in Britain at the time.

The overall result, according to the Office for National Statistics, is that during the year ending March 2020 immigration to Britain was at its highest level ever. Emigration was high, too, but net migration, at 313,000 was the second highest since 1964.

More recent figures are not yet available, and they will be affected by the Covid-19 pandemic. But given government policies, it’s hard to see how net migration will be heading downwards once the effect of the pandemic eases.

Meanwhile, the government has used its newly repatriated ability to sign trade deals to phase out tariffs on agricultural imports from Australia. Within 17 years, Australia will be able to export 170,000 tonnes of beef and 125,000 tonnes of lamb to Britain completely free of tariffs. No wonder farmers are worried.

The New Zealand free trade agreement, signed on 28 February this year, continues the trend; even more tariff-free beef and lamb is set to flood into Britain. National Farmers’ Union president Minette Batters commented that the real risk was not individual deals in themselves but the cumulative effect of successive deals. “This deal today shows I was right to be concerned,” she said.

As the government pursues new free trade deals with the US, Canada and India, and seeks to join the Trans-Pacific Partnership, the agricultural sector in Britain can expect its ability to compete to be further undermined. That’s not taking control: it’s handing it over to market forces.

The free trade agreement with India – negotiations began in January – is likely to centre not so much on agriculture but on a massive expansion of visas and work permits to allow Indian companies to send their employees to work in Britain, and equally to allow British companies to recruit Indian workers at below the going rate.

‘As the government pursues new free trade deals, agriculture can expect to be further undermined…’

One of the key benefits of Brexit was – or should have been – that it removed Britain from the fate of being absorbed into a new EU army. Now there is another threat on the horizon. Emboldened by burgeoning European unity over Ukraine, pro-EU politicians and think tanks are once again seeking to enmesh Britain in the EU’s military machinations.

On 21 March the Council of Europe formally adopted what it called a Strategic Compass, an “ambitious plan of action for strengthening the EU’s security and defence policy by 2030”. The plan envisages a permanent “rapid deployment” force of 5,000 soldiers, among other moves.

A week later Lord Frost, the government’s chief Brexit negotiator from January 2020 to December 2021, warned on Twitter against Britain being “sucked in” to the EU’s emerging strategy. “Many in Whitehall will want to join to get ‘influence’,” he wrote. Think tanks like the Conservative European Forum are saying that the invasion of Ukraine by Russian forces “has underscored the necessity of cooperation and coordination among European allies”.

On 29 March the same message also came from Robin Niblett, head of the Chatham House think tank. His ideas, according to an article in the Guardian, are “likely to be influential in Whitehall”.

And then there’s the disaster of the Northern Ireland Protocol. By any yardstick, the Protocol, agreed by the Johnson government in 2019 and finalised in December 2020 as part of the Brexit negotiations, is constitutional nonsense. Brought in to try to appease the EU, and in particular the Republic of Ireland, it says that Northern Ireland is outside of the EU’s single market – but that the rules of the single market still apply!

The result is that while goods move freely and without checks to and from Ireland, in effect a border exists between Northern Ireland and the rest of the UK. It led to the EU blocking the import of British sausages into Northern Ireland, and more significantly the application of EU pharmaceutical directives so that some 2,000 drugs available in the rest of the UK could not be given to patients in Northern Ireland until the EU backed down to “allow them” in December 2021. That’s just one of the reasons why the Protocol must go (see Box).

The government is at best marking time on Brexit, at worst actively undermining many of its objectives. And all the while, the enemies of Brexit are looking for ways of overturning the referendum decision. Despite all the achievements, the independence of Britain is still in the balance. Time for the people who voted to leave to tell the politicians to get back on track.