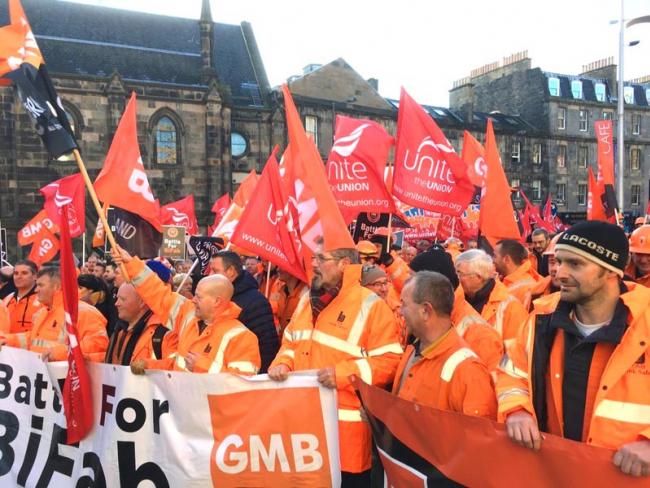 Decisive action by the workers at Burntisland Fabrication (BiFab) has saved their jobs. In the middle of November the company, which makes equipment for the oil and gas industry and the renewable energy sector, was on the brink of going into administration, and payment of wages ceased.

But the workers and their unions, GMB and Unite, quickly organised a work-in. They decided to continue to work to complete their current contract – for Beatrice Offshore Windfarm in the Moray Firth – despite having no guarantee that they would be paid. Members of both unions guarded the gates so that equipment and materials could not be removed from the yard in Methil, Fife.

The 1,400 workers are spread across three plants: Methil, Burntisland and Arnish on the Isle of Lewis. The unions were told that the company’s financial crisis resulted from the main contractor, the Dutch-owned Seaway Heavy Lifting (SHL), not paying BiFab for work already completed. The largest stakeholder, the energy giant SSE, was in dispute with SHL.

The solid work-in, combined with a vigorous march through Edinburgh on 16 November attended by over 1,200 workers, spurred the company and its contractors into efforts to solve the crisis. Within days a financial package was agreed with BiFab and the project contractors: SHL, SSE Energy and JCE Offshore.

This secures the work until the end of the contract in April 2018 with assurances from government that assistance would be given to seek further contracts.

At the rally in Edinburgh, Gary Smith, GMB Scottish Secretary, praised the workers' action: “If you had not taken the stand that you have, if you had not occupied those yards, I promise you – your yards would have closed on Monday. You are an inspiration to the trade union movement.”

The reasons behind this crisis and the cash flow problems have not yet been fully exposed. The two other major fabrication companies are unaffected by such problems.

Another positive outcome from this action has been the high level of joint planning and coordination between the two large trade unions in the industry.