Skip to main content
Home » News/Views » ­What does Britain need for independence?

­What does Britain need for independence? 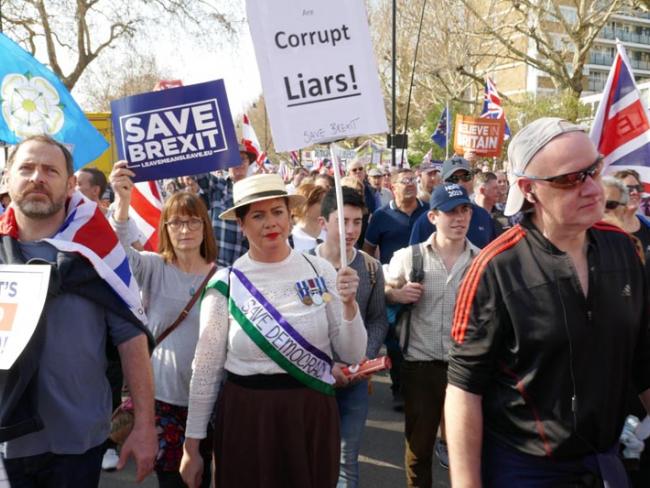 Marchers on their way to Westminster on 29 March this year – the date when we should have left the European Union. Photo Workers.

An epic struggle is gripping this country between those of us wanting an independent Britain and those who don’t. It is a struggle which could lead to the demise of both the Conservative and the Labour Party.

That struggle could – indeed must – change the role of Parliament, for Parliament has stood against the democratic decision made to Leave in the 2016 Referendum. Many people are of the same mind as Cromwell was in 1653 when he said to the Rump Parliament: “You have sat too long for any good you have been doing lately... Depart, I say; and let us have done with you. In the name of God, go!”

National independence is defined as the right of a nation or people to determine its own form of government without influence from outside. For more than four decades we’ve had the constantly growing power of the EU, which puts its four freedoms of movement – goods, capital, services and labour – above the control of national governments. These are the four freedoms that capitalism wants for the whole world: globalisation is a whole planet built in the image of the EU.

No significant role for national governments then, and Parliament has been content to cede more and more power without even asking us. This perfectly suits international capitalists, who like to by-pass nation states, by-pass the people and thus by-pass any democratic check on their activity.

Remember that some of the greatest supporters of these EU freedoms of movement have been British. It was Thatcher who as her first act in office relaxed exchange controls and allowed money to flow out of Britain. And Tony Blair was keen to preside over all this too.

The fight is here

The epic struggle of these forces for and against British independence is taking place on home soil. Those for independence lost round one when we joined (confirmed in the 1975 referendum), won round two by never joining the euro.

If you take the long view of history, that decision to leave the Exchange Rate Mechanism in 1992 will come to be seen as even more important than the 2016 referendum decision. Britain still has a national currency. Italy is currently looking at “mini Bots” – mini bills of treasury – as a first step on a long road to recover its national currency.

By their consistent reject of the euro the British people showed the beginnings of the first requirement for independence – a clear understanding of what the EU is about and its role in facilitating global capital. When the CPBML opposed joining the EU we called it an employers’ club. That’s still true, and now far more understand it. But more need to.

The decision of June 2016 requires us to extract ourselves from the EU – a much harder job than not joining something. It’s no good sitting back and waiting for it to happen. We must organise ourselves as a people to deliver the outcome.

It is beginning in Leavers’ groups across the country (see “Learning how to organise again, p12). The flowering of grassroots organisation up and down the land has been the greatest achievement so far of the post-referendum period, and a fine mark of the demise of the old politics. The Brexit Party has played a crucial role too, in demonstrating the will of the people for independence.

Paul Embery, a member of the Fire Brigades Union executive is not the first to be removed from a union position because of his views on the EU (see editorial Stop shutting down debate). Members must respond, defend democracy and remake their unions. Put officers there to serve the members, not to formulate policy on their behalf.

EU membership damages the capacity for self-determination – manifested in a country’s ability to feed itself, make things and make its own laws.

There are stark examples out there. Since Romania became part of the EU in 2007, 3.7 million Romanians – a quarter of the population – have left, leaving mostly the very young and the old behind. And Bulgaria currently heads the world list for the fastest rate of population shrinkage. Greece has lost 26 per cent of its GDP since 2007, the largest fall in modern history not linked to a war or revolution.

But what has EU membership done for Britain’s ability to determine its own future? Can we feed ourselves, make things here, keep the lights on and keep warm?

Despite all the impacts of the Common Agricultural Policy, there is still capacity in British agriculture. Latest government figures suggest it now produces just under 50 per cent of the food we eat.

Do we need to import as much? We are not going to be growing bananas or citrus fruits any time soon. But for most other fruit and vegetables, we could do it. From British wine and British lentils and chickpeas, some changes to the climate can have benefits.

Reliance on cheap labour has done much damage. Farms need mechanisation and a finance industry which will support investment in farm machinery.

Some things are more important than Brexit, say environmentalists. Well, let’s extract ourselves from the EU model of freedom of movement for goods, capital, services and labour and we’ll make a giant leap forward for reducing CO2 emissions and demands on the water supply.

On a world scale we need to make things closer to home, shorten supply chains, invest in energy saving equipment and shift fewer workers from place to place. The risk to the planet is the model of globalisation based on the free movement model of the European Union.

Never in our lifetimes has change been so swift, or so fundamental. The future is bright, and it is ours to grab. We have a people ready to build, and much building that needs to be done. We have the resources and the economic, industrial and artistic muscle to thrive without the EU, spending the billions we will save for the protection and prosperity of those who come after us.

Trials aplenty lie ahead. But they are the trials that come with independence, with adulthood as a people. If we can break free of the Treaty of Rome then there’s no reason why we can’t break free of economic enslavement too. We are shaking off the dirty rags of social democracy, the idea that others should act, and even think for us.