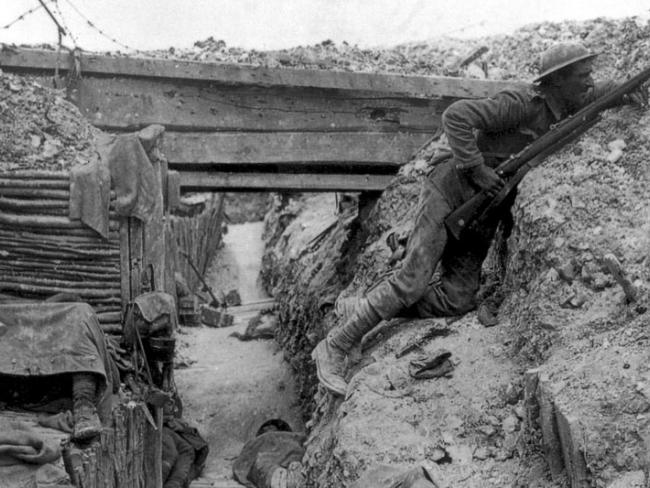 German trench occupied by soldiers from the 11th Cheshire Regiment during the Battle of the Somme, 1916. The bloodbath that engulfed Europe was a direct result of imperialist greed. Photo public domain.

Deep into the First World War, Lenin produced a seminal study of the economic origins of the conflict and a political analysis to guide action…

A Study of Lenin’s landmark work on the phenomenon of imperialism is worth anyone’s time. It is a shining example of political thinking from the only party to effectively oppose the First World War – and an investigation of a significant error about what drove the working class in Britain and other capitalist countries into war.

Written in exile, Lenin’s work Imperialism, the Highest Stage of Capitalism, provided political leadership and direction as well as analysis. In Britain and across Europe, the majority of “socialist” parties abandoned pre-war declarations of international solidarity and turned into jingoistic cheerleaders for their own ruling class.

Some who opposed the war, such as the Independent Labour Party in Britain, called for “peace between nations”. Lenin explained how that is impossible in the long run under capitalism – peaceful periods are but intervals between conflicts, not always military, but always economic.

Lenin’s great contribution was to explain the progress of capitalism in the previous 50 years and how that created monopolies and the political empires which went to war. Imperialism – of the capitalist sort – was a new development.

Lenin demonstrated how the growing capitalist economy in the 1860s led to concentration of production and a tendency to monopoly – the control of markets, areas of industry or even whole countries. This became the dominant aspect of capitalism by the end of the nineteenth century.

In this period technical improvements and mechanisation spread widely, but the concentration of capital (which controls production) became ever greater as more capital was needed to develop new enterprises. And the rate of exploitation of workers increased too – a point that Lenin does not fully explore.

On the back of this development of industrial and commercial monopolies, banks also became concentrated. They emerged from a role as enablers of capitalist transactions to become their master, creating a monopoly of capital itself – which Lenin describes as imperialism, or the domination of finance capital.

The separation of finance capital from production leads to the employment of capital simply to generate more capital. Capital is no longer a by-product of industry and commerce but is a parasite feeding on it.

Many of the features of capitalism we see today were present by 1914 – multinational conglomerates, leveraged control of enterprises, reliance on debt and “financial engineering”. Today we would call this globalism, though it has developed even further – capital now sees nation states as a limitation.

Others had already described imperialism. Lenin showed not only that it was endemic to capitalism rather than accidental, but that it also produced uneven development between countries. Simply, some grew even more powerful by the export of capital rather than goods. It took the early capitalist domination of colonies by unequal trading to a whole new level.

Now the industrial conglomerates controlled raw materials and whole industries across the world.

These empires, some new and some like Britain reinvented, raced to control the world, its people and resources in the final decades of the nineteenth century. The demand of each was that they had their “own” colonies.

But monopoly and imperialism did not end competition. Once the whole world had been “discovered” – opened up to capitalism – the only way for the dominant countries to expand was to wrest control from independent states or other empires – at first economically, then increasingly by open wars.

Russia entered the First World War on the side of Britain and France, both imperialist powers with control over much of the Russian economy.

By 1916 Russian losses were increasing and its troops disaffected. Conditions for civilians worsened with shortages of food and other essentials.

Against that background the Russian Bolsheviks set out to transform a war between contending empires into a war to free their country from capitalism. Lenin’s analysis of uneven capitalist development explained the shortcomings in earlier socialist thinking that a revolution could not be made in one country alone.

But on one point Lenin’s analysis was inadequate. He described a “labour aristocracy” holding back workers in the imperialist countries, Britain in particular. He suggested the vast profits made by imperialists were used to bribe skilled workers, as if workers in those countries were not themselves exploited and were only comfortable because of excessive exploitation elsewhere.

Lenin does not back this up with facts and rigorous analysis in the way he does elsewhere in the book. This view taints all of the British working class – except possibly the most downtrodden – with being stooges of the imperialists, living off the crumbs of others’ exploitation.

It’s a misleading and corrosive idea which takes many forms – such as “white privilege” currently. All are unscientific and fundamentally deny the economic basis of capitalist society – the division into workers and capitalists.

Our party programme totally repudiates the idea that workers have been bought off or that there is peace with capitalists, who never give up any “crumbs” willingly. Struggle varies across time and place, but does not go away – as events in Britain during WW1 showed.

The years leading up to the outbreak of war were marked by intense class struggle. But the struggle for wages and conditions was immediately and deliberately abandoned by trade unions – “to help the war effort”.

The industrial peace did not last long. There was unease at “dilution” – the replacement of skilled labour with unskilled. With shortages, price rises and static wages, struggle developed around Britain – led by people in local workplaces and not the official trade unions.