Skip to main content
Home » News/Views » 1916: Out of empire and war [shorter version] 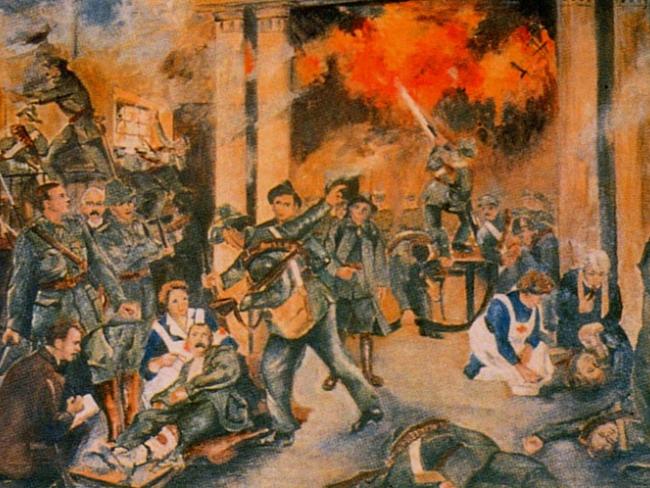 The 1916 Easter Rising in Dublin stubbornly troubles the present. Prompting strong feelings, it has been widely categorised as dismal failure and tragic folly, daring adventure and noble sacrifice, while its participants have been classified as everything from dangerous lunatics to national martyrs.

But with the passage of time, the Rising obstinately refuses to diminish but shines through as a most extraordinary, challenging event; its scale and significance weirdly out of kilter with its actual size. Many of its intimations are still unrealised.

This was the first open revolt by workers against the carnage of inter-imperial conflict, showing they could strive for social and economic advance rather than being dragged into the great slaughterhouse of capitalist competition. The sacrifices of the Rising proved of long-term benefit to Ireland, whereas 49,500 Irishmen died in the futility of the Great War (many from nationalist backgrounds) fighting for the British Empire.

On Easter Monday 1916, intent on starting a rebellion against British rule in Ireland, the Irish Republican Brotherhood, the Irish Volunteers and the Irish Citizen Army gathered at prearranged meeting places and occupied a number of strategic buildings in the inner city area of Dublin around the General Post Office (GPO) that commanded the main routes into the capital and enjoyed a strategic position in relation to the major British military barracks. Taking the British military by surprise, the properties were taken virtually without resistance. The rebels set about making them defensible.

A Proclamation was read to the public outside the GPO. A sparse crowd offered a few perfunctory cheers. The proclamation established an independent Irish Republic and provisional government to administer temporarily its affairs. Ireland’s “national right to freedom and sovereignty” was asserted, as was "the right of the people of Ireland to the ownership of Ireland".

The leaders claimed: “Ireland through us summons her children to her flag” and could thus “prove itself worthy of [its] august destiny”. The Rising was linked to Irish history: “the Irish people have asserted their right to national freedom…in arms…six times during the past 300 years”.

The Proclamation suggested that the Rising was not just a political event but also foreshadowed social and economic change, providing a vision of a free Irish state which would oversee the welfare of all its citizens, as the republic would guarantee “religious and civil liberty, equal rights and opportunities” and would “pursue the happiness and prosperity of the whole nation … cherishing all the children of the nation equally”. There was also a commitment to introduce universal suffrage.

“If we lose Ireland, we have lost the Empire.”

The leaders of the uprising were not unprepared. James Connolly had published studies of the European insurrections of 1830, 1848 and 1905 in the socialist press. The Rising attempted to occupy key parts of Dublin but failed to take Dublin Castle (the seat of British government), the train stations or the two docks.

There were assemblies outside of Dublin, but many dispersed in confusion, though there was an attack on the Royal Irish Constabulary barracks at Ashbourne, County Meath and 700 volunteers mobilised under Liam Mellows in County Galway.

The British military onslaught, which the rebels had anticipated, did not at first materialise. When the Rising began the British authorities had just 400 troops in Dublin to confront roughly 1,200 insurgents, so they began to amass reinforcements.

“If we lose Ireland, we have lost the Empire”, said a British general later. So the British authorities drafted reinforcements into the capital. By Friday 28 April, 1,600 rebels (more had joined during the week) were facing 18-20,000 soldiers.

The GPO was entirely cut off from other rebel garrisons. Next day it came under a ferocious artillery attack which also devastated much of central Dublin. The troops did not attempt a mass infantry attack. The new strategy compelled the insurgent leaders, based at the Post Office, first to evacuate the building and later to accept the only terms on offer – unconditional surrender.

All seven signatories of the proclamation were executed by the British military on the charge of committing treason in warfare. James Connolly, who had been wounded in the fighting, was executed sitting down in a chair. Though initially largely unsympathetic or indifferent to the Rising, Irish public opinion switched and became more sympathetic due to manner of their treatment and the executions. Eventually the executions were halted, though there were several thousand arrests.

The Rising prompted the rebirth of the Irish nation. In military terms a failure, it influenced to varying degrees the thinking of later generations. As the poet W. B. Yeats noted, everything was “changed, changed utterly: A terrible beauty is born.”

Though many had greeted the Rising with a lack of sympathy or bewilderment, within three years everything had changed and most Irish people had turned their backs on the British Empire. They elected a rebel parliament that sat in Dublin instead of Westminster, tempting Britain to declare it illegal – leading to the War of Independence against Britain from 1919 to 1921, and the eventual creation of the Irish Free State.

The sacrifice of the Easter Rising propelled Ireland a few steps down the road to freedom. The ideal of 1916 is not yet fulfilled. Partition remains. The EU exists, stealing sovereignty from the Irish republic. The Easter Rising still has meaning.