After the vote - Rebuild Britain 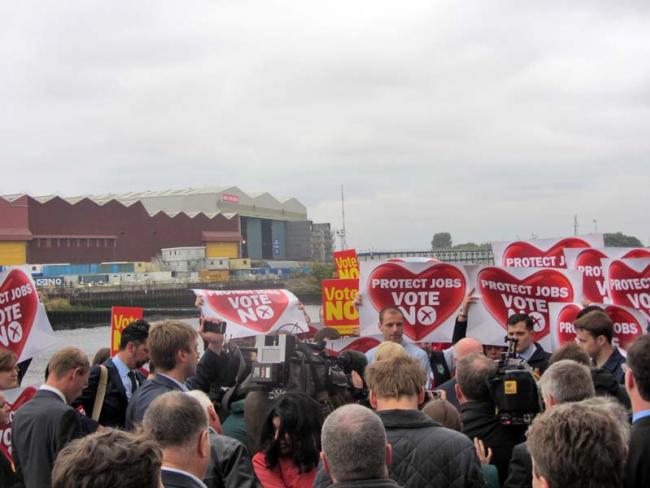 Newly qualified shipbuilder Paul Sweeney speaks at a No rally at BAE Systems yards, Scotstoun, 15 September: shipbuilders in the rest of Britain are “my comrades, not my enemies”. Photo Workers.

By a margin of nearly 11 percentage points, Scotland has spoken: we are part of one nation from Land’s End to the Shetland Isles. It was, in electoral terms, a landslide, not the whisker some claim it to be.

But there is no disguising that nearly 40 years after a Britain-wide referendum approved entry into what is now the European Union, the very idea of Britain is under siege. The attack is quite clearly coming not just from Brussels but from within our own country. That it failed in the Scottish referendum is a victory indeed.

There was the Scottish National Party, of course, its leader now sniping from the dustbin of history, clamouring for independence while hurling themselves even closer into the death hug of the EU. The likeliest outcome of a win would have been forced entry into the euro, with control of the economy handed over to Brussels.

End Tory rule screamed the ultra left, as if enshrining the rule of the market in perpetuity – which is what separation with EU and euro membership means – were not the very essence of capitalist rule, supported by Tory, Labour, Liberal and SNP alike.

Then there were Cameron and Miliband, agreeing in the first place to a referendum on the future of Britain that denied a vote to over 90 per cent of its inhabitants  with their plans for further fragmentation in the form of “federalism” ready to roll and widely mooted beforehand. They talked of democracy, but where was their mandate?

Now that the dust has started to settle, the key task for the working class of this island is the rebuilding of Britain, in every sense. We need a country with real jobs for its people, we need a future for our children, we need infrastructure and we need industry. We welcome the first steps of rebuilding, announced on 19 September: the contracts worth over £200 million going to BAE Systems at their Scotstoun yards on the Clyde in Glasgow.

But above all we need to rebuild the idea of Britain, the concept of a single country, a nation, which will stand against the European Union, NATO and the giant trans-national corporations for which borders and nations are an obstacle to global domination.

‘Nearly 40 years after entry into the EU, the very idea of Britain is under siege.’

Yes, the turnout was high. All this has been described in glowing terms as a wonderful exercise in democracy. But it has been a strange kind of democracy, one conducted almost entirely on terrain drawn up by Westminster and Holyrood, two sides of the same rotten parliamentary coin.

For a start, only people living in Scotland were allowed to vote. Too late, many in the rest of Britain woke up to the fact that their country, the country they were born into and brought up in, stood to be dismembered – and they weren’t even being allowed a say in it.

The CPBML said from the start it should have been a referendum of the whole country, because the future of the whole nation was at stake. But the cosy deal was done, the parliamentary parties signed off on it, and there was no opposition.

A vote for all

Therein lies a marker for the future: our unions must demand that in the unpleasant event of another referendum on the future of our country, everyone living here should have a say. Perhaps after watching the Scottish referendum campaign unfold the way it did, workers will be more receptive to such thinking.

And then there was the delusion of “fighting” for a better NHS in Scotland, as if anyone needs a separation referendum to start fighting for what they want. A vote to separate is not fighting, it’s surrender. Our services will never be safe while we accept the rule of capital, whether its politicians sit in Westminster or Holyrood.

‘British workers should be calling for independence from the EU and global capitalism.’

Many unions chose to sit on the fence, as if commenting about their future as national unions were some kind of a problem. But not all: GMB, USDAW, Community, Aslef, the NUM, and the CWU were among those in the No camp. Unite, meanwhile, agreed to support neither side, even though it acknowledged, “This is a decision on the future of a nation and its people and everything that entails.” When a Unison official spoke up for the Yes side at a fringe meeting at that union’s conference, his union simply said that it had no position either way on the referendum debate.

And now we find that while the TUC is organising a march in London with a theme that unites everyone – “Britain needs a pay rise” – the Scottish TUC’s event on the same day is for “A Just Scotland”. Well, the referendum shows Scots aren’t just thinking about Scotland. Sometimes it seems that the higher up the labour movement you look, the more backward the thinking.

And despite the strong result, one clear conclusion is that the level of much of the debate – on both sides – was depressingly shallow. You could hear it in blogs and tweets, in the interviews in the streets.

People talked about how they hated Westminster politics, for example. Well, so do most people in London, but they’re not voting to float off the capital as a separate entity. And that’s the more serious side of the argument – many were drifting off into misty-eyed romanticism, or looking on it all as some kind of lark.

On the No side, it seemed as if hardly anyone got down to the real argument: that we are one people, based on one working class, with a nation to defend against the European Union and a future to fight for. That’s part of the problem with having a campaign led by Scottish Labour in the shape of Alastair Darling.

Thousands of overwhelmingly young Londoners gathered in Trafalgar Square just days before the Scottish referendum to send a message to Scotland not to separate off from the rest of Britain. To judge by their formal office attire they were largely professional workers, part of the belated surge in awareness south of the border of what the break up of the UK would entail.

The event was heartfelt but sentimental, with pop stars and other celebrities exclaiming, "We love you Scotland" and the audience waving diminutive flags. The best of the speeches called for cooperation not competition between Scots and the rest of Britain, and pointed out the selfishness of one section removing itself from the struggle of the whole.

But missing was the industrial trade union voice that could have spelt out the dangers of different parts of Britain squabbling over such issues as oil and energy policy. Worst of all was the attempt by comedian Eddie Izzard to exploit opposition to borders within the UK by calling for an end to all national boundaries. This was a warning of what to expect when it comes to the referendum on the EU.

Nevertheless, those individuals and organisations who worked and argued tirelessly for over two years in the campaign for national unity and for a united working class deserve due recognition.

Our own campaign to secure a No vote began in earnest with the distribution to all delegates at the April 2013 Congress of the STUC of our document “10 Reasons to Oppose the Break Up of Britain”. Regular, combative articles such as “The Battle for Britain” (November 2013) and “Scotland’s false Flag” (July 2014) helped counter separatist thought.

When further attacks on Britain come – and come they will – the response will have to be clearer and more founded on reality. This was not a debate about independence, not even one about the sham of independence, but a question of the dismemberment of our country.

Put a stop to any further talk of increasing devolutionary powers. That will only give sustenance to the SNP and separatist thought when it should be fully swept aside as a hindrance. The mandate of over 55 per cent, more than 2 million votes, for No in this referendum gives us confidence in enforcing this.

Talk of “federalism” and “regional powers” is actually thinly disguised fragmentation, dismemberment and disempowering of Britain and its working class. We don’t want regionalism. We don’t want yet another set of highly paid and highly useless politicians

What workers throughout Britain should be calling for is real independence: from the European Union, and from the whims of global capitalism, from the rule of bankers and capital, from wars and NATO.

Bombproof our class and institutions from further fragmentation and put rebuilding on the agenda!