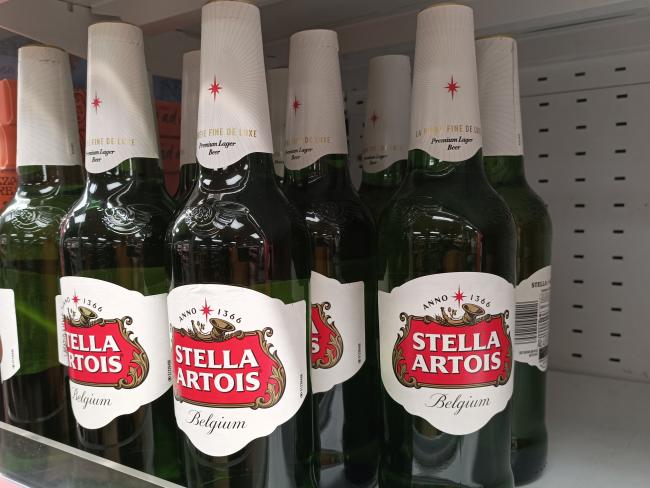 Stella Artois, one of the beers brewed at Samlesbury. Photo Workers.

GMB members at Budweiser’s Samlesbury brewery, near Preston in Lancashire, are to strike again in a continuing dispute over pay.

The brewery, which produces Budweiser, Stella Artois, Becks and Boddingtons, is owned by the huge multinational Anheuser-Busch InBev (ABInBev). Its 2021 annual report shows strong financial recovery after the pandemic.

After protracted negotiations the employer offered a contemptible 3 per cent increase in 2022, followed by the same in 2023. It also threatened not to honour the settlement date with back pay unless this deal was agreed by 21 July.

With inflation running at 9 per cent, the brewery workers rejected this as a cut in their real wages. They began a ban on overtime, training and face to face handovers in May and staged strikes in June. They will walk out again for 36 hours from 16 to 18 July, with a further 12-hour stoppage on Tuesday 19 July.

A recent survey of beer prices in the UK by the consultants CGA found that British beer prices has risen by more than 70 per cent since the financial crash of 2007-2008. The average price of a pint is now around £4; some London pubs now charge over £8.

The Financial Times estimated that if beer prices had risen in line with inflation, the average price of a pint should be £3.35. The big brewers are threatening further price rises, blaming the effect of the war in the Ukraine on barley supplies. However brewers, Budweiser among them, have been boasting that they now use only British barley.

Rising beer prices and other cost increases will force more pub closures too. There are now just under 40,000 pubs in England and Wales. More than 7,000 have shut in the past 10 years, according to a report from property consultants Altus.